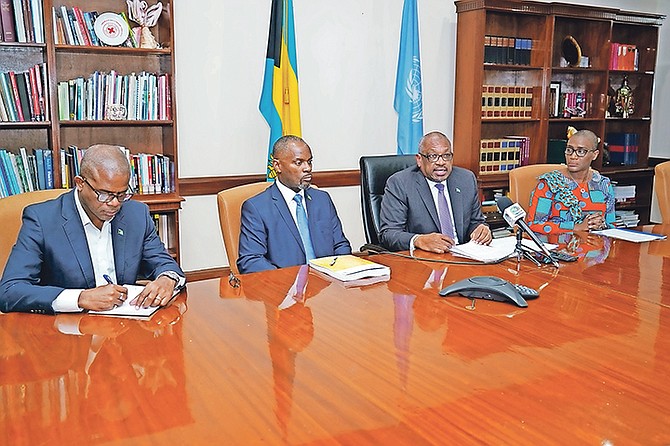 The conference, hosted by the United Nations Development Programme, is scheduled for January 13, 2020 in Nassau.

“Quite urgently, we are seeking to raise funds to complement the government’s $10 million already given for home repairs,” Dr Minnis said at a press conference yesterday.

After two cyclones struck Mozambique earlier this year, the UNDP held a two-day international pledging conference in that country, attracting $1.2 billion in pledges.

Officials disclosed no specific target for The Bahamas but Denise Antonio, the UNDP resident representative here, said the pledging event is all about boosting support for the country.

“The UNDP’s Bahamas mission is intended to facilitate disaster recovery in the short, medium and long term, but it is also unique in that, for the first time, the UNDP is actively seeking to engage the private sector and philanthropic individuals who are well-poised to help finance the recovery of this country,” she said.

She said the UNDP, in a collaboration with UNICEF, will inject financial resources into the affected communities through a cash for work programme to empower those most affected.

“This will help to advance debris clearance and management in Abaco,” she said.

John Michael Clarke, chairman of the National Disaster Authority, underscored the mammoth task ahead of removing debris from Abaco. The amount of debris needed to be moved is more than an entire year’s worth in New Providence, he said.