Wells And Hanna Are Track And Field Athletes Of The Week

SEVERAL Bahamian athletes got their indoor seasons off to winning starts and were recognised by their respective conferences for stellar performances.

Sasha Wells and Tiffany Hanna garnered athlete of the week honours for their programmes when the weekly honours were announced.

Wells, of Oral Roberts University, was named the Summit League Female Track Athlete of the Week for the week of December 2-8.

The junior sprint hurdler opened her season with three top-3 finishes, including one event title at the Bob Timmons Challenge on December 6 in Lawrence, Kansas.

Wells won the 60m hurdles with a time of 8.43 seconds and finished just .02 seconds shy of her own Oral Roberts and Summit League record. 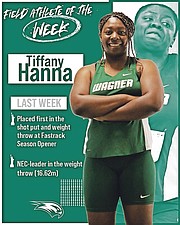 She followed with a second place finish in the 60m in 7.63. She concluded her meet before finishing the night as a member of the 4x400m that finished third in 3:56.22.

Her 60m hurdles time is now ranked No. 5 in the NCAA, while her 60m time is ranked No. 45. It is her first athlete of the week honour of her Golden Eagle career.

She continues her momentum from her standout sophomore season when was named the Summit League’s Indoor Track Athlete of the Year.

She became the first Golden Eagle in conference history to achieve the honour.

A season of milestones was highlighted by her performance at the 2019 Summit League Championships where she was named MVP after earning a total of 26 points.

Over the Northeast Conference, Hanna achieved a similar honour when she was named Field Athlete of the Week for the Wagner Seahawks.

Hanna had a fair of first place finishes in the throws at the Fastrack Season Opener, Friday, December 6 at Ocean Breeze Athletic Complex in Staten Island, New York.

It was the first conference honour of her collegiate career.

Her throw of 16.62m was just 32cm shy of her career best effort as a Seahawk that she set as a sophomore at the Eastern College Athletic Conference (ECAC) Championship.

She surpassed the 16.30m mark on three consecutive attempts and is ranked 17th overall on the list of ECAC Championship automatic qualifiers for the 20-pound weight throw.