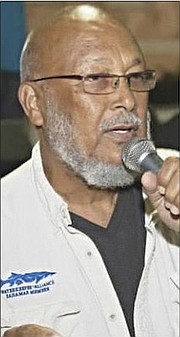 Save The Bays chairman Joseph Darville.

SAVE the Bays Chairman Joseph Darville criticised the government yesterday for not being present to oversee the clean-up efforts at the Equinor South Riding Point facility in East Grand Bahama.

Mr Darville told The Tribune there is still no government official stationed at the site to monitor the daily clean-up taking place.

He said: “I don’t know why that is, but I think it’s because…they gave Equinor permission to carry out the cleaning effort as they see fit. They do have a team there from Polaris as I indicated before and I have fairly good confidence in them that they would do the job as it should be done. I don’t think they will deceive us the environmental (groups) or deceive the government with respect to proper way to complete that cleaning.

“It’s still (poor) that there isn’t anyone there from the government permanently overseeing the clean-up effort. Even if they visited for one or two hours a day just to make sure they are monitoring the people’s property. That is Crown land and that belongs to the people. We have elected governments to take care of our precious environments and particularly our pine forest, that is a reserved area.”

Mr Darville noted Equinor officials said it took them a long time to get permission from the government to commence the clean-up process in the pine forest.

“...I guess because it’s Crown land they had to go through some procedures but again that was very disconcerting that some two months after the spill they have yet to clean up into the forest proper. What they are doing now, they are having to carry out the procedure bit by bit, inch by inch. They are clipping the leaves that are saturated with oil,” he said.

“The task is going to be a long and tedious one they do estimate in the last meeting that they had with Water Keepers Bahamas and Save the Bays that it’s going to take them at least six months to go through that whole area hand by hand, cleaning and clipping all the things saturated in oil.”

After Hurricane Dorian pummelled the northern Bahamas in September, reports emerged of an oil spill from Equinor’s South Riding Point storage facility in Grand Bahama. The estimated volume of the oil spill is 55,000 barrels (2.3 million gallons).

Equinor has said it is committed to cleaning up after the incident. The company has said it will establish a long-term monitoring plan of ground water and for the affected forest areas to be submitted to local authorities.

So much for Darville's previous unusual cozy relationship with Statoil/Equinor. Perhaps the envelope he recently got did not contain what he had hoped to get.

What a vile, despicable liar you are. What evidence do you have to make such a slanderous accusation?

What makes you think you're the only one entitled to get a Christmas card. LMAO

This is a crock from the get go - let the people who made the horrible mess hire their own firm to come in and clean up?? This is how our Government and Big Business screw the Bahamas - the gubmint and the business only care about lining their pockets not the after affects.... if the gubmint did care they'd have someone out there monitoring this and probably a new Natural Disaster style ministry although every time we have an election here we have a national disaster....again....and again and i think again next year.....

If I were Mr. Darville, instead of worrying about all the oil that has already been washed off the leaves by heavy rains and is now likely down into our drinking water table - I would find out the name of the manufacturer of his bed mattress.

It must be a particularly good mattress, to allow him to sleep these many weeks which have passed since his visit to Equinor after which he claimed that he was pleased with the proceedings. He could make a deal with the manufacturer to import these mattresses and sell them here in the Bahamas, in volume, at a good price. He could make a lot of money.

Remember the tree removal was ordered to stop. 700 acres of trees had oil on them, and after only 35 acres of oil covered trees were removed - a stop order came from an as yet unnamed government agency/official. It seems there are secret people giving orders in this country, whose names cannot be found out.

Anyway, it is the Christmas shopping season now. All those on Grand Bahama with money are making their way to Florida to donate it to the Chinese goods distributors over there. Nobody has time to hear about this old news, about which the time to act has long since passed. I also feel sorry for that poor goat who died in the storm.