Face To Face: Christmas Won’T Be The Same Without My Friend, The Amazing Chippie 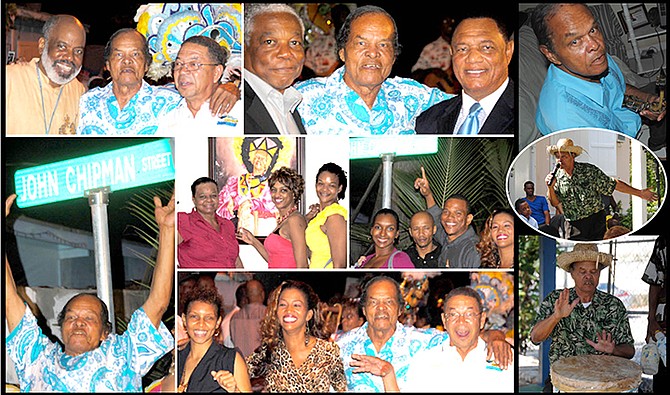 This time next week it will be Christmas Eve. As quickly as that, the year… and the decade, is coming to an end. As I prepare for the traditional festivities that surround this holiday, it hit me… this will be my first Christmas in many years without Chippie.

What is a Bahamian Junkanoo Christmas without John “Chippie” Chipman? It just won’t be the same. No one could beat the drum like Chippie. I remember the first time I saw him perform in concert. There is a point at which he transforms from the upbeat, jovial entertainer into something legendary. Chippie would go into a trance and it was as if something else took over. It seemed as if the light around him changed as he threw his head back and pushed all his passion through his arms on to the goatskin drum. Seeing him perform was something magical. His performances were so special and so stellar that Chippie was requested around the world. He performed all over the world representing The Bahamas, and he was proud to say so. He would perform at schools around the country and let the kids know that no matter their background and no matter their circumstances, if they combine passion with dedication to something like he did, it could take them all around the world.

I enjoyed visiting Chippie on John Chipman Street, formerly Lifebuoy Street, especially during Christmas time. He may have been many years my senior, but he was my friend.

It all started out when I, as a reporter, attended a small event he had, and I was the only member of the press who showed up. We talked and laughed for a time after the event. He invited me to come to his house and see how he makes the drums and how he lives. On the day I went, Chippie was under the big tree near his front door painting old paint cans in order to make a new set of drums. It was a daily ritual. He would go downtown on cruise ship days and play for the tourists in order to make money for himself and young adults in the neighbourhood who would accompany him and play other instruments. By afternoon, he was back home sitting under the tree making drums.

As I sat there with him under the cool tree, so many people came to stop by. As soon as school was out, the little children in the area flocked to his yard to be around him and to play – unconcerned with the fact that they were around a living legend. Chippie just had the kind of personality that made you take to him right away. He sent one of the little boys in the yard to buy me a “cup” (Bahamians know that’s frozen Koolaid in a plastic cup… and it’s oh so delicious if made correctly). I sat and ate my frozen cup as we talked and laughed for a long time. From that day on, I returned to Chippie regularly.

I became his official photographer without even knowing it. He would call my phone and say, “Felicity, please come and meet me at (such and such a place) and take my picture!” Chippie didn’t have big funds to give but he always put something in my pocket for working so hard for him over the years. In turn, I had the opportunity to develop a friendship with one of the greatest cultural icons of the country.

Christmas time was special with Chippie. That’s when drum production tripled. He taught the kids how to make the drums and play the drums, too. There isn’t a child through his corner that doesn’t know how to at least play that one instrument, unless their parents did not let them come outside. Chippie was a talented man and could play other instruments as well, including the saxophone. Sometimes you would pull up to his home and hear the melodic tunes piping out of his horn before you could park the car. His family would be around at Christmas time. Kids off to college who grew up around him would hang out there. Old friends and new ones would drop by. Chippie’s house was always buzzing with activity, but especially around Christmas.

Sir John Arthur “Chippie” Chipman, MBE, died at the age of 90. He was buried on Saturday September 28, 2019, at St Agnes Anglican Church, officiated by Bishop Drexel Gomez. A well-attended Junkanoo rush was held downtown in his honour. I was travelling at the time and unable to attend. When I saw the video of Chippie’s ‘final rush’, I was brought to tears. Everyone dancing through the street was filled with emotion. You could see it and you could feel it. It was a powerful home going service befitting of a Junkanoo king.

Chippie lived his life the same way he played the drum – bursts of powerful energy, filled with rhythm and soul. And when the performance was done…. Bam! That’s the end. Not a peep more. What I mean by that is, Chippie was full of life. Even in his old age, he was upbeat with the attitude of a teenager. He didn’t go down a slowly-sliding slope. He stayed upbeat to the end. Ninety wonderful years lived to the fullest.

This will be the first Christmas for many without Chippie. Where will all those people gather? They will find other places to go; they will gather at other homes. But it just won’t be the same. There is a special place in the heart of his lived ones. We have been marked indelibly with the ink of his strong character and jubilant personality. There is so much to be said about his life and his story, but you can search the internet and find that out. As a matter of fact, quite a number of them are written by me and can be found at tribune242.com and thebahamasweekly.com. But today’s tribute was more about emotion and passion than his history. I wanted to share with the world the kind of simple man that this world-renown, beloved public figure was. He was a simple Bahamian man who loved people.

Enjoy the collage of photos – all taken by me – which I share for this week’s Face to Face.