Locked Out: Officer At Centre Of Job Switch Row ‘Cut Off’ By Force 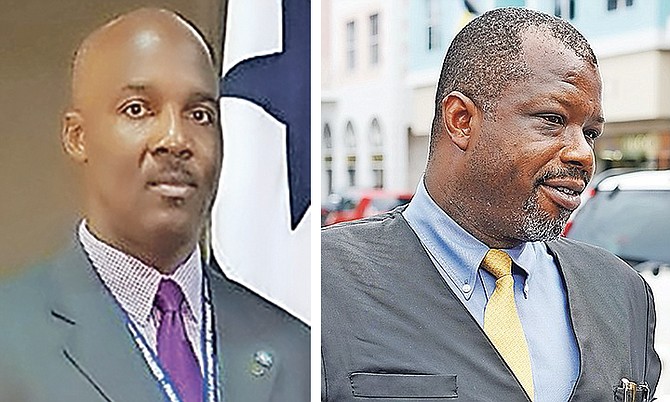 SOME of the privileges of Assistant Commissioner of Police Kendal Strachan have been revoked as he refuses a transfer to the Ministry of Social Services.

His lawyer Wayne Munroe said his radio and his profile on Lotus Note - a police service network - have been disabled and his access card to police headquarters has been deactivated.

ACP Strachan is presently on sick leave but by the time he returns to work next week Mr Munroe says he expects to have already initiated legal action on his behalf.

“This is a very sensitive one and I’m very mindful of that,” he said yesterday, “because I know there are varied positions out there and I am always cognisant of the officers involved because I know them personally and their families.”

He said ACP Strachan is exercising his rights but the government maintains its position.

ACP Strachan’s actions are the culmination of a government agenda that began when eight senior police officers were directed to take vacation leave in March.

He is the first of five officers due to return to service when their leave ends. Two of those officers have already sought legal advice, Mr Munroe said, and the lawyer expects they will discuss their options with him over the holiday.

Mr Munroe said contrary to the transfer letter ACP Strachan received from Commissioner of Police Anthony Ferguson, his loss of privileges proves his appointment as chief security of the Willie Mae Pratt School for Girls and Simpson Penn Centre for Boys is not ancillary to his position as ACP. “Even the simplest police officer and civilian in headquarters has a profile on the police service network,” he said.

“He can’t even reach police officers on his radio. I told him I am fairly certain this is not being planned by the commissioner or the deputy commissioner because Paul Rolle and Anthony Ferguson are the type of fellas who would go and tell you, ‘give me your radio, give me your card.’ These (other) guys are so dunce that they believe they can transfer him out of the police force. They have this degree of arrogance that they believe they can do whatever they want,” Mr Munroe said.

Mr Dames wouldn’t discuss the legalities of the transfer but when asked whether government lawyers approved the move, he emphasized that the “whole collective weight of the government has been brought to bear” on the matter, as with any government decision.

The Minnis administration has been accused of lacking candour concerning its plans for the senior ranks of the law enforcement agencies. Fiscal prudence was its justification for its vacation leave policy but police and defence force officers have said the policy followed no discernible logic.

Two deputy commissioners of the Department of Corrections have alleged in lawsuits that they were sidelined via vacation leave so the government could appoint their junior, Charles Murphy, as commissioner of the prisons.

Nonetheless, Mr Dames was clear yesterday that the law enforcement agencies are, in fact, being restructured.

“The government has taken a position that we wanted to see where these agencies were because we have to position them for the future, understanding that our focus is all about education, recruiting quality officers and then succession planning which is the end game,” he said. “I say to the commissioner, the commodore and commissioner of prisons every day, your bags are ready? Because your times are drawing nigh. Is your legacy intact? Have you prepared your respective agencies for the next tier of leadership?”

He continued: “We did a manpower audit of the police force as we did of the defence force which is going through a transition period as well as the Department of Corrections. We’re using those audits as a benchmark to take us where we need to go because at the end of the day it’s all about the Bahamian people and the level of service we’re providing. What we’re doing is nothing new. We’ve had officers who have been seconded in the past. Clarence Russell is an example who was seconded to the Passport Office. Before him we had Chief Superintendent Franklyn Dames who was seconded. Franklyn has since retired and Russell has now moved on to the Department of Immigration.

“Some are saying this is a demotion. What does that mean? Because our idea of policing has been very linear, very single focus so that it’s just about the police force? We have to start thinking much broader than the police force to address the social ills that are impacting our country. If we’re saying these individuals are good enough, and if we’re saying they are quality individuals then we should not have an issue of using their talents in places where they are needed and those are the kinds of discussions we ought to be having. Do we keep them in the police force where we have an over abundance and positions are overly saturated or do we allow them to take their skills they would’ve learned elsewhere so they could further enhance and assist us in this fight?”

SOOOOOO..... we are willing to keep our status to police and lock up our youths, but it is another story when we are assigned to participate in their reform.... Is that a demotion or an opportunity to influence our youths and make a meaningful contributions?

So when did we reach the point in this country where professional people can’t sit down and negotiate. Reason things out. They say a lot of murders and attempts are due to the lack of the ability of conflict resolution. But is the government setting the right example by the way it is treating its employees? Some persons who have served this country for many years and with distinction.

They have this degree of arrogance that they believe they can do whatever they want,” Mr Munroe said.

Sounds just like the PLP - oh wait you can't tell the difference between them???

No Games should have his bags packed and at the door. The mean and spiteful one why is he allowing others to carry blame for what he is doing.

It is not good for the Citizens of any Country to loose confidence in the police.

It is important that all human beings be treated with respect.

The question is why are they going after certain Police officers.??