Charged With Child Abduction - Again: Woman Accused Of Trying To Steal Boy While On Bail 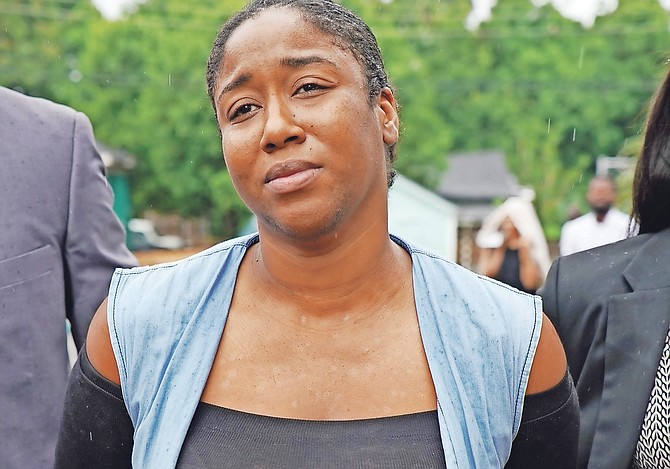 ALLEGED child abductor De’Edra Michelle Gibson broke down in tears and blamed the “lodge” for “plotting” against after being charged with attempting to steal a seven-year-old boy while on bail ahead of her Supreme Court trial on similar charges.

The 30-year-old was arraigned before Magistrate Samuel McKinney on a single count of attempted child stealing yesterday, eight months after she stood before the magistrate faced with charges that she abducted four little boys from various places in New Providence between February and March.

Although she was not required to enter a plea to the charge, Gibson, who was on $20,000 bail for the previous allegations, maintained her innocence, and insisted that she would never compromise her freedom by committing such an act. She further insisted that she does not know what she could have possibly done to “deserve” such allegations being levied against her.

“I feel as though, this that they putting on me, I did not do it,” she insisted. “I’m not guilty and I would not jeopardise my freedom…”

Despite her pleas, however, as attempted child stealing is an indictable offence and one that can only be tried in the Supreme Court, she was ordered to be remanded to the Bahamas Department of Correctional Services until the end of February, when a voluntary bill of indictment (VBI) will be served.

Prior to being remanded, Gibson, a hair-stylist by profession, had alerted Magistrate McKinney to her other charges, and that she was on bail in relation to those. She then asked if she could be remanded to the Sandilands Rehabilitation Centre (SRC) as opposed to going to prison, given her documented mental health issues.

“Is it okay if I go—because I’m a Sandilands patient and I take medication and everything—is it okay that I go to Sandilands? Because I have court January 16 for my other case,” she asked.

However, Magistrate McKinney maintained that she would be remanded to BDCS, and that the best he could do in the circumstances is order that she be seen by a psychiatrist while at the Fox Hill facility. That is, unless she is successful in securing bail a second time from the Supreme Court.

He subsequently adjourned the matter to February 28.

As she was being escorted away by the officers, Gibson, visibly frustrated, tearfully said: “All of this is because of what I do? Because I here? And like I tell them I feel as though the lodge is plotting on me. So I really don’t know what I did to deserve this, sir.”

In April, Gibson was charged before Magistrate McKinney with abducting three eight-year-old boys and a three-year-old between February 16 and March 29.

During her initial arraignment, her attorney Howard Thompson Jr told Magistrate McKinney that his client has a history of mental health issues. In fact, he said, just last October, Gibson spent some time in the psychiatric ward of the Brookdale University Hospital in New York.

As a result, Magistrate McKinney remanded the woman to the SRC and adjourned the matter to have a psychiatric report on her mental fitness presented to the court. That psychiatric report revealed she was in fact fit to plead to the charges. She subsequently elected to be tried in the Supreme Court.

At the time, however, Gibson appeared initially not to want her matter to be tried in the Supreme Court, and at the very least, seemed to be opposed to her family having a part in the decision making. She could be overheard telling her attorney that “they don’t have no say”.

Nonetheless, after she told Magistrate McKinney of her selection, and he remanded her to the BDCS to await the service of VBI, in a disgusted voice she remarked: “I hope they happy.”

As part of her bail conditions, Gibson was ordered to have regular check-ups at the SRC every two months, follow her treatment plan and provide proof of compliance to the court.

On July 31, when Gibson was presented with her four VBIs, it was revealed that the Crown had upgraded her charges from child abduction to child stealing.