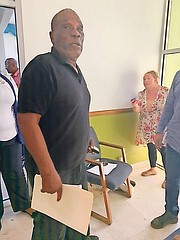 Cyril ‘Boxer’ Minnis and, right, Tiffany Dennison at the time of the alleged incident.

TIFFANY Dennison said she is leaving the country after making an assault allegation against Cyril “Boxer” Minnis, the brother of Prime Minister Dr Hubert Minnis.

When contacted yesterday, Ms Dennison said she is fleeing the “racism and misogyny” in the Bahamas.

“It’s a criminal matter and as a litigator, I’ve actually quit doing litigation… I think our courts in Grand Bahama with one civil judge only for Supreme Court is very congested and this will take years to go through court,” Ms Dennison said.

“I just don’t have the strength. I want to make it clear it’s not that I don’t believe in my court system, but with only having one civil judge and with Hurricane Dorian you know kind of setting things back.”

She added: “It’s something that is going to be heard in years to come and I won’t even be here. I’ll let karma take its toll. Honestly, I’m tired and Dorian didn’t help. My office hasn’t been reopened and you know they haven’t fixed anything and I’m just, yeah over it. I’m tired and I need a break.”

Ms Dennison said in the new year she’ll be moving to England, a place where she’ll have equal rights.

“I’ve just left it to the police they’ll have to deal with it. I’m quite frankly moving, I’m done. I’m getting out of a country that is this racist and this misogynistic. For 22 years I’ve been home and I’ve been trying to change it, I’m tired.

“I’ve experienced this kind of behaviour — not the physical hitting but the threats, the misogyny and the racism since I’ve been home and now it has gotten to the point where people are taking it out physically on me and I’m just not interested.”

Last week, Ms Dennison accused Mr Minnis of punching her in the face at the Registrar General’s Office in Grand Bahama.

Kevin Mortimer, chief superintendent of police, confirmed at the time that there is an active investigation into this.

Ms Dennison, a lawyer with whom Mr Minnis has had a long-running legal dispute, filed the complaint with police.

Two alleged witnesses corroborated her claims to The Tribune, saying many people witnessed the incident. However, when contacted last week, Mr Minnis alleged it was Ms Dennison who assaulted him “with her finger.” Asked if he punched her, he first said “no comment.”

However, he later said: “If I strike her, and she a big, red woman, wouldn’t she have marks all over her?”

For his part, Mr Minnis said police did not arrest him for a reason.

NO catisland boy if he attacked her he is dead wrong. But I would like her to know that there are many very beautiful kind and gracious Bahamians. I meet them every day. The fine young Bahamian men and Boys who are very respectful.

Birdie you are an ass and typical of the mentality or lack of.

Not so fast Ms. Dennison. So you're leaving the Bahamas because of racism and returning to England. Really? England where the newest member of the Royal Family, is leaving because of Racism! Come clean, in England you don't have to associate with blacks of you don't want to.