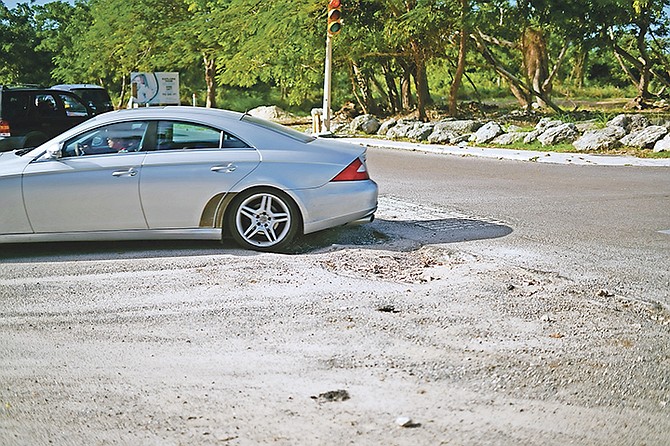 The potholes at the traffic light of Village Road and Shirley Street at the weekend. Photo: Terrel W Carey Sr/Tribune Staff

MOTORISTS forced to navigate the pothole-riddled road at the traffic lights of Village Road and Shirley Street are calling for something to be done about the junction.

Many of the drivers who use the road as part of their daily commute, told The Tribune the deep potholes are interfering with the flow of traffic and damaging their vehicles.

Two weeks before the Christmas holiday, parts of the road were dug up when Bahamas Power and Light carried out work in the area.

As of yesterday, the pot holes were filled in but many motorists are concerned that the makeshift repair will not last and that proper resurfacing must be done immediately.

John Lisgaris, an employee of Yanni’s Security, located right after the traffic light, said the road repair is long overdue.

“It’s unacceptable that you would dig up a road and leave it like that,” he said. “It’s getting worse, because right now how it rained, the potholes sunk in even more.”

Mr Lisgaris said the potholes affect traffic “more than anything,” because they force cars to stop and slow down as they attempt to go over the rough area, causing the cars behind them to “back up”.

“You dig up a road you suppose to patch it back,” he insisted. “I heard there was a BPL truck and they said they were supposed to come back and patch it but they haven’t. I haven’t experienced any car damage yet, but if you’re running over that everyday you’re bound to have a problem eventually.”

Andrea Johnson, another motorist attempting to navigate the uneven road, also told The Tribune she felt as if the potholes were a “serious safety hazard”.

“It’s ridiculous because I wasn’t expecting it,” she said. “You can’t see it until you get to it and then it’s so deep.”

Mrs Johnson said the holes make driving on the road extremely stressful because it forces her to “crawl her way through them” and some of the cars behind her are impatient.

“The worst part is it’s not only one, it’s a couple of them and they’re huge. These aren’t any mini holes, these holes are huge. It’s very, very dangerous and they could cause your car to have to have to go through excessive damage. It really needs to be fixed.”

Other drivers said they feared the potholes would gradually worsen and make the junction impossible to use.

“If you hear my car right now, it has plenty of bumps and makes a rickety-rackety sound,” Delores Gibson said.

“I just hope that the government is trying to do better with these roads because all the cars now in bad condition because of roads like this.”

The Tribune reached out to BPL who told this newspaper that the road was dug up because a high-voltage cable in the vicinity of the Shirley Street and Village Road junction had faulted.

The company said extensive trenching is required to replace the cable, but the process is incomplete at this time.

BPL said crews were scheduled to begin work in the first week of January, which are contingent upon securing the necessary approvals from the Ministry of Works.