Face To Face: ‘We Have Two Hands. One For Ourself The Other To Help Someone Up.’ 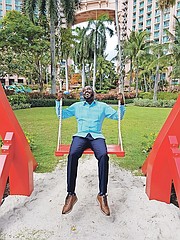 Mark Brown looking on the bright side of life as he prepares for the new year, as he sits on a swing at his workplace, Atlantis Resort.

It’s the finale! The end of 2019 and the end of an entire decade! Many people are in reflection mode today as the year 2020 is imminent. Tomorrow, it will be a brand new day, a brand new year and a brand new decade. This is the time of the year that is often spent with family, friends and loved ones. But there are those who don’t have the luxury of having blood relatives to be with. Mark Brown remembers those days. He and his twin brother Matthew spent the first 13 years of their lives in children’s homes.

Their single mother struggled with a drinking problem, and they were the last of eight children. The situation led to the Ministry of Social Services taking the last of her four children – all boys. Because the Brown twins were babies at the time, the children’s homes were all they knew. Luckily, they were never separated, so at least they had each other. There were times when people wanted to adopt Matthew and not Mark, and vice versa; however they were fortunate to stay together. Most of their time was spent in homes in New Providence, but they also spent a year in Freeport. It was a way of life that didn’t seem out of the ordinary until they started attending school.

“I wouldn’t say it was a bad experience (growing up in a children’s home) because it was all I knew,” Mark said.

“Being born in a particular situation, you would feel no way about it because it’s normal. I didn’t know something was different about my life until I went to school… not until I saw other kids being picked up by their parents. It caused me to have an enlightening about what life should have been. So then, you would have feelings about it. Wishing you had parents, your own room and your own space.”

When the twins were 13, the social worker who was responsible for them was being moved to another department. She made it her mission to reunite all the children in her case files with their parents, once they were worthy, before she relocated. By the time they were 14, they were back in their mother’s care and so were their two elder brothers.

“It was an indescribable feeling; it was exciting to be home and out of the system,” said Mark.

“Sometimes I sat in the classroom and looked out of the window like… ‘wow, I have a home!’ There were fun times. We lived near the downtown area, so my siblings and I would go window shopping at night. I wouldn’t tell you every day was sunshine. We were trying to bring two worlds together. My brothers and I naturally had to adjust. There were some heated arguments along the way as well. I remember one time, my mother said to me: ‘You never miss something you never had!’ And I told her that she never missed something that she never had, either. It’s a conversation most people couldn’t even imagine having with a parent. But when you love someone, you forgive and let go. There is no perfect relationship. It’s how you handle it and how you work through it.”

Mark pointed out that children all over the country, in an out of children’s homes, are going through things and often need people in authority in their lives to come from a place of love and understanding.

During the Christmas season, gifts pour into the children’s homes from around the country. Kids are happy to be remembered and to be blessed with presents - but there’s more they need, Mark believes. For this reason, he started “A Hand Up Foundation” to reach out to kids who are in the same position he was. He knows all too well what they need is time. They need attention, mentoring and consistency in their lives.

“I found that lot of the kids coming out of the home, especially young men, were ending up either in jail or they had a hard time getting a footing in life,” he said.

“I was concerned because I knew what it was to go through it. It’s easier for young persons to listen to and understand someone who went through what they went through. From when I left the home I wanted to do something. In 2014 I came up with the idea to start a foundation. I chose the name ‘A Hand Up’ because God gave us two hands and I think we have an obligation to help others. One hand is for you, the next one is to reach down and help someone else up. The motto is “A touch of hope” because all it takes it a simple touch – showing you care – to change someone’s life for the better.”

The foundation has programmes that assist children, from babies straight up to age 18. Mark strives for consistency – sticking with the kids as they grow – because it was something lacking in his life growing up. Having people constantly coming in and going out of their lives made it hard for them to trust people.

In times like these, when it’s the holidays and people are giving the kids presents, Mark and members of A Hand Up are giving the kids quality time. He enjoys mentoring and is setting a good example for the kids through his own life testament. He is an Atlantis Resort employee of 21 years. He started out as a telephone operator and today, he is a conference service host. He is an ordained minister at Word of Life Kingdom Ministry in Oakes Field. He is the author of two books: A Hand Up: Mark Brown’s story and A Positive Touch. Both are available on Amazon. If you wish to donate or be a part of his foundation, visit: www.ahandupbahamas.com.

The foundation has a mission - “to actively prepare our young people to make ethical and moral choices over their lifetimes by instilling in them the proper values and giving them the tools necessary to excel once transition from the children’s home into society.” The vision of A Hand Up is – “to fund, source, distribute and create opportunities that will improve every day life, education and future for disadvantaged children”.

Someone please tell Felicity Darville that our corrupt Tweedle-Dumb Minnis-led FNM government has tied both our hands behind our back and thrown us over board.