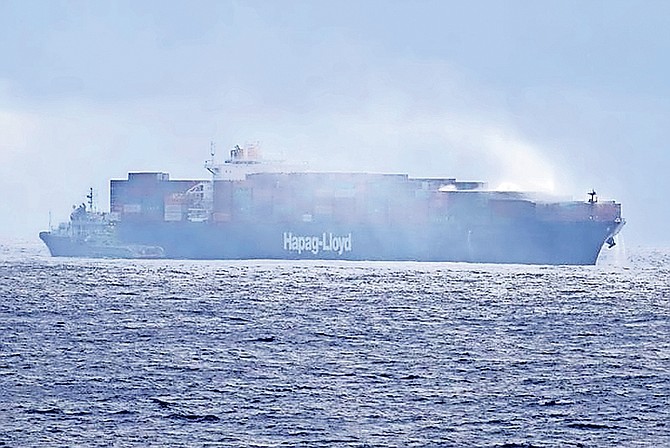 The MV Yantian Express, a 320-metre container vessel, on fire.

THE mega-freighter that was burning off Canada’s east coast since January 3 is now docked off port in waters off Grand Bahama, awaiting clearance from the relevant marine authorities at the Port Department and the Grand Bahama Harbour Company.

The mv Yantian Express, a 320-metre container vessel operated by German shipping company Hapag-Lloyd, was originally scheduled to arrive in Halifax, Canada, but bad weather conditions forced the ship to be re-routed to the Freeport Container Port in Grand Bahama.

The Tribune has learned that the vessel and its crew had been docked in seas off the island since last week.

According to earlier reports, a blaze that had started on board the ship was brought under control by tug vessels, equipped with water cannons, while off Canada’s east coast.

Freeport Ship Services, which is also expected to be appointed the agent, is still awaiting information as to whether the ship will be brought to port.

When asked about information pertaining to the damage or how many crew members are on board at this time, Maurice Hall, operations manager at Freeport Ship Services said: “I have no idea; I don’t know anything until they decide what they are going to do with it; whether they are going to bring it in or not. I don’t even know that.”

He said that he has been aware that the vessel is out to sea off port.

Mr Hall said that he does not know how long the ship will be here or if repairs will be done here until the ship is permitted in port and is cleared by the Department of Customs.

“It arrived sometime last week, crew members are still on board. Our part does not kick in until the vessel comes in. We really don’t have any information until that happens.

“Everything is at a standstill. We are waiting on the Port Department and marine authorities. So basically, yes, we are appointed the agents for whenever it gets into port,” he said.

SOMEONE VERY HIGH UP IN OUR GOVERNMENT WAS PAID A SMALL FORTUNE UNDER THE TABLE FOR PAVING THE WAY FOR THIS MOST HAZARDOUS VESSEL TO ENTER BAHAMIAN WATERS. THE VERY REAL AND GREAT ENVIRONMENTAL RISKS POSED HERE ARE WAY TOO OBVIOUS. AND YET ONCE AGAIN WE DON'T EVEN GET A PEEP FROM EITHER MINNIS OR HIS MOUTH PIECE (ACE) AS TO HOW THIS COULD HAVE BEEN ALLOWED TO HAPPEN. LMAO

There is a VERY good reason Canada refused entry...

Yes, or no - the even larger The MV Obantian, a 46,303-metre loaded oil drums container vessel, captained by some comrade Micky Mouse fellas, tucked away in shared cramped rented month to month office space by Florida suitcase company - is also wanting enter Freeport's Port. Yes, no?

"arrived sometime last week, crew members are still on board. Our part does not kick in until the vessel comes in. We really don’t have any information until that happens."

yes or No, is the ship in Bahamian waters? Isn't it that the authorities have the right to board any vessel and demand a manifest?

The bahamas has a 12 mile territorial limit.

This isn’t right. Why can’t they extinguish the fire. Send it back to Canada.

Change in port-of-call due to weather is understandable, why not Floridas ports? Possibly for repairs in FPO.
Is the cargo still burning? The manifest is the first item released to port agencies ... wonder why it is so secretive?

Yinna freaking out. Of course it came here to Freeport and we welcome it. This is what we do....

Not denying at all that the Freeport shipyard is TOP NOTCH

After reading some of these comments I see why this country is in the state its in! Freeport harbour and ancillaries have the capability to deal with this cargo ship. The fire is out, the damaged containers are to be unloaded so that thr ship can be inspected.

Bahamians are just dumb and hysterical. Here is an opportunity to make some money and these stupid statements I am quite certain those in charge will do their due diligence. It seems like when well_muddo make a stupid comment the rest of you lame brain fall in line.