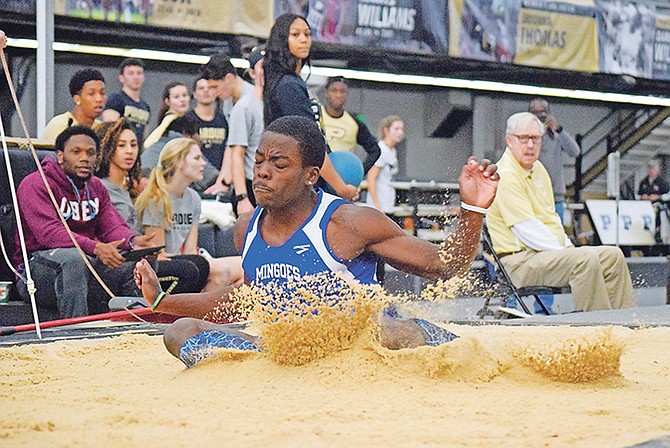 Ken Mullings in action in the long jump as he soared to a new national record in the heptathlon. Photo: UB Bahamas

“There was never a doubt for me that I would break the record,” Mullings said in Lafayette. “I knew my off-season training was paying off and this was the proof of it for me.”

“I could have picked up more points in the shot put but I felt right on track after day one,” he said.

On day two, he placed second in the pole vault competition clearing 4.25m (13ft 11.25in) but won the other two events. In the 60m hurdles he beat all of the competitors by more than half a second and was the only one to go under nine seconds with a 8.35 second performance.

In the final event — the 1000m — he pretty much knew the record was gone if he just stayed on pace. He won the event in

2:58.55 and was excited to have not only improved the record but also to have gone under the three-