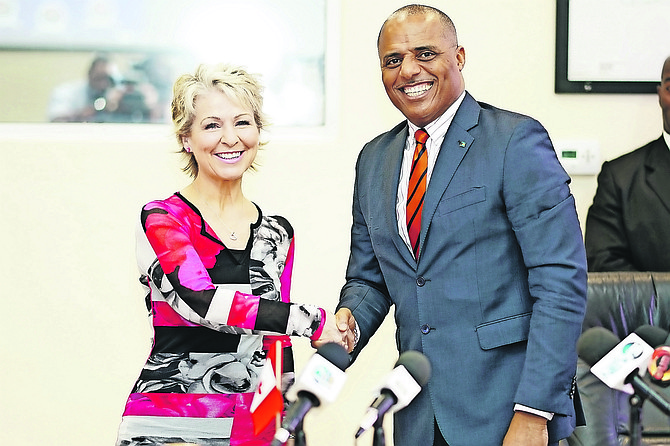 During a signing ceremony held at the Paul Farquharson Conference Centre yesterday morning, National Security Minister Marvin Dames called the signing an “earnest” effort by the government to complete the long-touted transformation of the Fox Hill facility.

He said the move signals the Minnis administration’s commitment and focus to increased public safety.

The government is seeking to mirror aspects of CSC's ‘risk needs responsivity model’ at BDCS.

“The Correctional Services Act 2014 that moved the prison service into a Department of Corrections is a milestone in building the department into a leader of treatment programmes to ensure that inmates upon release from our system, have the necessary interventions to address their needs,” Mr Dames said.

He said the collaborative exchanges between the two facilities have already resulted in the development of an automated system to ensure the application of resources to treat inmates are effective and efficient, and the extensive training of case management staff for assessments of new inmates.

Central to these initiatives will be a specific concentration to the establishment of new parole system, which Mr Dames said is still being developed.

“Training for parole and programme officers began in the fall of 2018,” Mr Dames added. “The Inter-American Development Bank through its Citizen Security and Justice Programme (CSJP), conducted a training seminar for representatives of all branches of law enforcement stakeholders.

“During the seminar the parole legislation as expressed in the 2016 Conditional Release of Offenders Bill was analysed and recommendations for adjustment were made.”

He added: “With the charter signing today, we are highlighting what has been accomplished and the work that lies ahead.”

Mr Dames said the Ministry of National Security remains “ever mindful” that the complete transition to a correctional facility can only be accomplished through respect of Bahamian culture, a prerequisite he said the work with CSC meets.

CSC Commissioner Anne Kelly, who was on hand for yesterday's signing, said the charter between the two organisations provides a framework for the advancement of engagement activities between the two sides, inclusive of the efficient and effective assessment and treatment of inmates in their care.

Mrs Kelly said to date, CSC has hosted numerous staff from BDCS to ensure the seamless transfer of its model.

“The previous six months has seen extensive training provided to designated staff at BDCS,” she said.

Case management staff have been trained to conduct extensive assessments for new sentenced inmates; in interviewing techniques and producing and analysing information from various sources in order to address the inmates needs.

Mrs Kelly said CSC has only provided this level of training to Bahamian staff.

She said officials have also developed an automated risk assessment system that will assist the case management staff to accurately assess . inmates' needs and ensure that they are being provided with programming they require.

“In the end, we have come far and while much training is completed, the focus will turn to the implementation of all these strategies with public safety remaining the ultimate goal,” she added.

Last week Mr Dames said to solve the issue of overcrowding at the BDCS, his ministry would primarily focus on reducing the number of inmates, rather than building additional cells.

“For far too long, members of the (BDCS)…have been considered really the stepchild of law enforcement,” Mr Dames said last week. “And that’s evident in the amount of attention that you have been receiving over the many years. And if you were just to walk into the confines of the (BDCS), you would see what I mean.”

Mr Dames said when he became minister and toured the facilities, he was “saddened” by its state and particularly the accommodations for officers.