I Cried When I Watched Fyre Documentary, Reveals Aussie Model 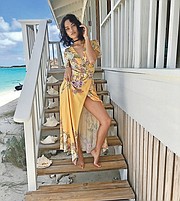 BACKLASH from the ill-fated Fyre Festival has moved one supermodel involved in the event to tears.

Australian supermodel Shanina Shaik broke her silence on her role in the failed luxury event stating she was “dragged into it”.

“I cried when I watched it,” she told the Daily Telegraph, referring to the Netflix documentary on the debacle. “It is really horrific what happened. The girls and I were just kind of dragged into it. We would never want to promote something like that or take someone’s money.”

The 27-year-old supermodel, alongside fellow IMG-represented models Hailey Baldwin, Bella Hadid, Alessandra Ambrosio and Chanel Iman, may be asked to testify in the bankruptcy case of Fyre Media, the entity that staged the doomed festival.

Ms Iman also opened up about the ordeal in a recent interview, telling People Magazine she had “no idea what was going to happen.”

For Ms Iman, the most terrifying part of shooting promotional video for the festival was interacting with Exuma’s famous swimming pigs, and she told the media she was afraid of getting bitten by the animals.

A New York judge granted an ex-parte order last month seeking subpoenas for celebrities who helped to build up the hype around the failed festival.

Convicted fraudster Billy McFarland, organiser of the festival, raised $26 million from investors and officials are trying to determine how that money was spent.

IMG reportedly received US$1.2 million from McFarland to promote the event between November 2016 and February 2017, according to the trustee overseeing the bankruptcy case.

According to Billboard, McFarland paid out $11.3 million in the weeks and months leading up to the doomed festival. Ms Shaik further explained: “When a client comes to my agent and has a vision or a project they want to work with us on, my agency always makes sure we are protected and looked after.”

Meanwhile, a GoFundMe account for Maryann Rolle, an Exuma restaurant owner who was shafted by festival organisers, raised more than $217,000 in donations up to press time.

Mrs Rolle’s story of losing thousands of dollars when the festival collapsed in 2017 resonated with viewers. She was contracted to provide catering support and lodging for the festival. At the peak of the event, she produced 1,000 meals per day.

These models were hired so early in the game and, according to the film, were told that the nasty man had purchased the island. It is NOT their responsibility to check ownership and they had no way to know that during following months the whole thing would turn out to be a scam. Nn fact no-one knew it was a scam until the day of the festival. I can't see how these models could be held liable in any way.

A bunch of incompetent men on an ego trip, who were unable to plan anything other than hiring the most beautiful girls in the world to promote their fantasy. Terrible to see a hard-working woman like Mrs. Rolle ripped off by these idiots.

There's absolutely nothing wrong with having a marketing campaign and doing it so well that people are willing to pay you 12,000 a pop to participate. The failure is 100% with the govt who willfully fall for ANY investor pitch as long as it's a white person, they're foreign, they talk in millions and the official believes they can personally benefit from the transaction. We have hard evidence in the Fitzgerald and Bridgewater case and lots of circumstantial evidence otherwise of persons going into cabinet barefoot and coming out owning half the island and a million dollar home.

So I don't blame McFarland one bit for trying to make as much money as he could off his idea. The fault is all with the Tourism officials and other permit granters, customs, local boards etc who didn't do their due diligence.

And since Maryann cried and got some well deserved assistance, I expect to see a lot more tears rolling down cheeks.