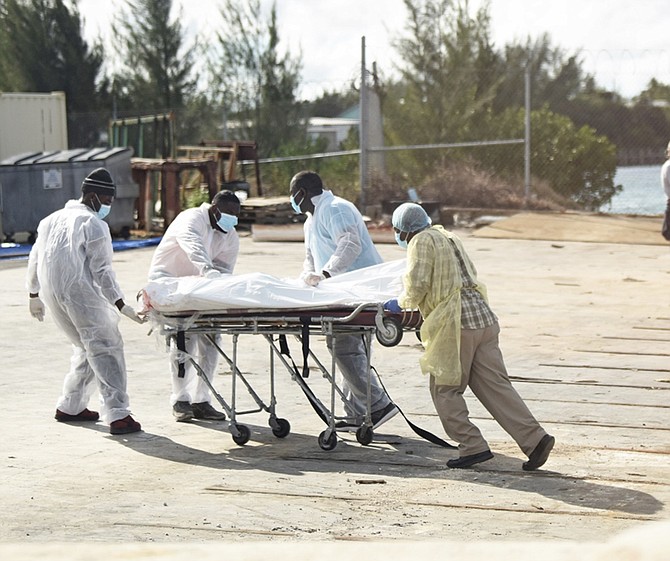 On the day that another Haitian body washed up on shore - a female - the League of Haitian Pastors reported that they have been in contact with family members for at least 21 of the now 31 migrants who died when their sloop shipwrecked near Abaco cays over the weekend. The Royal Bahamas Defence Force said the most recent body was too badly decomposed to be brought to Nassau for a funeral and will be buried in Abaco.

The League of Haitian Pastors will host a mass funeral on Sunday at the Enoch Beckford Auditorium but there will be no viewing because the bodies are too badly decomposed and it is difficult to identify some of the corpses, according to league president, Dr Jean Paul Charles.

In fact, eight of bodies will be buried in Abaco perhaps as early as today, Foreign Affairs Minister Darren Henfield said in an interview with ZNS yesterday. Dr Charles had hoped embalming at least five of the bodies would have slowed their deterioration, but Mr Henfield indicated that all eight bodies would undergo an early burial on the advice of the minister of health and coroner. The remaining bodies were expected to arrive in New Providence last night on a flight paid for by people in the Haitian community.

Meanwhile, Mr Henfield said dialogue is underway with the Haitian government in an effort to boost communication to warn undocumented Haitian migrants against making the treacherous journey to reach the Bahamas and other areas by sea.

Mr Henfield said: “We’re asking the Haitian government, and I spoke to the minister, that more should be done through communications to tell people of the perilous nature of this journey, that nothing is worth risking your life for and this is just an eye-opening reality of what can go wrong.”

People who have come forward to identify their family include those living in the United States, Canada and Nassau, Dr Charles said.

He added that the league is working to ensure accommodations exist for family members who wish to attend the funeral, some of whom would not be able to afford hotel arrangements. Some of the 18 survivors helped identify the dead, Dr Charles said, though some have also been non-cooperative and remain traumatised by their experience. The survivors told rescuers they were at sea for seven days when they were shipwrecked on a reef well-known to be dangerous sometime between Friday night and Saturday morning.

A Royal Bahamas Defence Force spokesman said yesterday no additional bodies were recovered when marines went out to sea.

The exact number of Haitian migrants on the sunken vessel is unclear, but recent reports put the number in the 80s, meaning as many as 35 people are unaccounted for.

Now lets find out who is sponsoring these illegals to take this trip and how they get assimilated and lost in these communities so quickly.

If 10 Bahamian males were killed trying to break into a bank or committing some other crime I doubt there would be the same level of grief over the outcome. These people died as a result of using money from relatives (some of whom my be illegal) in the Bahamas to take an illegal trip into this country where they would then have safe housing and a job. They were criminals who died in the act of committing a crime while being supported by a network of criminals! Simple!

It’s true that if they weren’t trying to enter the Bahamas illegally this wouldn’t of happened. Although it’s still a huge burden on their families that loved them.

INVESTIGATIONS MUST BE DONE INTO ALL PERSONS WHO MAY HAVE BE .....ACCOMPLICES....ACCESSORIES....JOINT PRINCIPALS...blood on their hands.....facilitated, ..enabled..samd language communications.....transferred?.. facilitated..?...payments for passage money....start to end.destination ...offerred sanctuary to this criminal act....liable....and most gut wrenching sadness to this tearful tears and heavy sorrows to victims ......!!!!!L

This is one of the greatest loss of life from a single tragedy in the country. And it is business as usual only because The dead are Haitians.