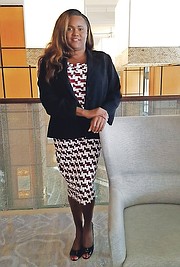 Some of the tourists said they felt comfortable, said Alexus D’Marco.

MORE than half of the 5,400 men onboard the exclusively gay Allure Caribbean Cruise disembarked the ship on Monday, a development activist Alexus D’Marco says is a good indication the capital is viewed as “safe” for the gay community.

Ms D’Marco, lead spokesperson of the D’Marco Group, said the organisation estimated that around 3,343 gay men left the ship and headed to the Bay Street strip to either shop or sight-see without major incident.

However, she said, there was one steel pan musician who played the controversial Buju Banton song “Boom Bye Bye” as some Allure guests passed by. Ms D’Marco said she explained the song’s offensive lyrics – which advocates violence against gays – and asked that Bahamian music be played. The musician agreed, she said.

The group collected data on how many left the shift and compiled brief comments from guests about their perceived level of safety at the Prince George Wharf and downtown area.

This, Ms D’Marco said, is a nod in the right direction toward the country marketing itself as a destination for all, including those in the lesbian, gay, bisexual, transgender and intersex (LGBTI) community.

“Some of the tourists we spoke to they said they felt comfortable,” Ms D’Marco said in an interview with The Tribune. “They saw the police and they felt better when they saw us, people who they could identify with greeting them. So there was a better sense of security.

“The people were very friendly towards them, which was very surprising especially when they went into the Straw Market, the ladies there were cordial to them. So that’s what stood out to them most - the hospitality they received.”

“So if we can keep that up with all tourists and get away from being this country that don’t allow LGBT tourists, we are creating a shift in perception.

“What also stood out is there was no public display of affection and they were also advised not to do it on the ship. A guest confirmed this and they were advised not to show any offensive behaviour, that they understood the dynamics of this country right now. There are people who want to come and I think LGBTI tourism has a place here.”

As of 2018, LGBTI tourism worldwide was pegged as a $218.7bn industry and is something Victor Rollins says the Bahamas needs to focus more on.

He is the owner of HIPS International, a destination management company that caters to members of the LGBTI community.

His business has been able to find a small opening in the market as groups from the LGBTI community constantly complain there is nothing logistically which appeals directly to them.

While the scenario has changed in this regard when compared to years before, Mr Rollins said the country has a long way to go when it comes to its marketability and appeal to those in the community.

Its time people behave like they gat some sense. No one is saying do what they do or even agree. but its not your place to cause harm to someone else because you don't agree. "we can disagree without being disagreeable" RBG

Gays are the only demographic that flaunts their sexual preferences in public, seemingly to offend the sensibilities of the masses so they could claim discrimination. If they behaved like normal sensible folk nobody would even notice them!