FACE TO FACE: A lesson to cherish and build a new life - never give up 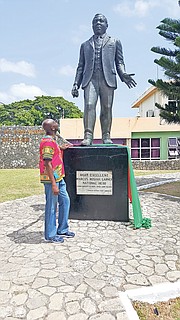 Hubert Edwards stands by a statue of Marcus Garvey.

Many of us know we have greatness within us. We know we are meant to achieve more and do more than we are at present. Sometimes we blame our circumstances, the people around us, the blocks we face, or even our leaders for us not being where we think we should be. Sometimes, those circumstances can create a hindrance; but by no means do they have to define you. The journey may take a little longer, but the greatness you seek is within your reach and there is no need to be complacent. Reaching beyond perceivable limits is what got Hubert Edwards where he is today. He was born in a humble little town in Jamaica and today, he is a well-known personality in The Bahamas, his second home; he is an asset in the financial industry in the region and a budding international speaker with his sights firmly set on making his mark in the world.

When he was born in a rural village called Standfast in Brown’s Town in the parish of St. Anne in Jamaica, Hubert almost didn’t make it. His mother, Monica Coke, was all by herself when it came time to deliver him. It was a difficult labour and he almost died as the umbilical cord was strangling him. As fate would have it, his “Granny”, Mary Jane Morrison happened by and saved him. Old wives would say the way you were born often depicts your path in life. For Hubert, that seemed true. He was the fifth of his mother’s seven children and the third of his father, Lewis Edward’s four children. His father nicknamed him “Bobo”, which means “friend” or “child” in African and he was born on a most significant day in Jamaica and the African Diaspora – August 17, the birthday of national hero Marcus Garvey, who happened to have been born in the same parish. He would find this connection to Africa and the destiny of its people to struggle to overcome would define his life.

“My childhood could be characterized as a paradox of happiness and lacking,” said Hubert.

“A time of great love but many times quiet sorrow. A time of public triumph but private distress. Being capable in school but unable to fund the dream. Having abilities but limited by the experiences around me. A desire for more but always lacking. And even then it was such a rich, diverse experience that there are so many positives that I still take into adulthood. Like the kindness of others, the love of people, of friends helping friends and sharing the little they have. Two of my childhood friends, Mitchell Parke and Anthony Black, are individuals who at the time unknowing helped me to survive. There were many others, community friends, teachers and so on. In a nutshell - a wonderful journey with a lot of bumps along the way which I think were designed to teach me humility.” 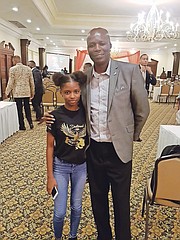 Hubert Edwards with a participant of the Youth Empowerment Programme.

His family ended up moving to a village called Benin, still in Brown’s Town, which overlooked the villages Egypt and Goshen. At the time, the significance of his path did not connect, but in retrospect, Hubert realized how these circumstances were defining his path. Although there were many mouths for his mother to feed, he considers his mother “a wonderful woman who sacrificed all her to make it possible for me to progress”.

“She suffered a lot due to her circumstances at the time but she always had a quick smile and a good heart,” he said.

“She sang like an angel and I owe pretty much everything I am today to her and her example of what it means to persevere and never give up. My father was referred to as Ba-Lew, Uncle Lew, Mass Lewis or just Uncle. A very interesting man he was, difficult to understand at times but he, too had a quick smile, a very brilliant mind and had the kindest heart you will ever find. His generosity is one of the things I hold on to dearly.”

Hubert spent his entire childhood in Brown’s Town in St. Anne before he went to the capital, Kingston for university. He started his career as an auditor at KPMG in Jamaica, rising to the level of a senior auditor. He left KPMG and brought his wife to The Bahamas after being recruited by Tony Kikivarakis to join Deloitte, where his areas of specialization were Audit and Regulatory Consulting.

“It was at a point (moving to The Bahamas) where we just had our first child and I instinctively knew based on all the circumstances that I needed to do something dramatically different if I was going to afford them a different kind of life,” Hubert said.

“So I made the trek to The Bahamas supported by the fact that another great friend Orville Lewis was already here. It has been an interesting journey but one I would not trade.”

Hubert moved up the ranks at Deloitte and was promoted up to the level of senior manager. Having worked at Deloitte, being involved in the audit of a number of financial services companies and developing a love for regulatory matters, he decided he wanted to spend sometime with the regulators, The Central Bank of the Bahamas, where he became Senior Bank Examiner. He was actively involved with the Bahamas Association of Compliance Officers (BACO) during the time the country was blacklisted and spent many hours working and contributing to the cause. He presented at many seminars and conferences to help many financial services institutions, through Deloitte, to correct challenges they had.

“It was a great time of learning and so going to the Central Bank was a progression of the desire to grow in that area. I spent two years at the Central Bank and left after a very open and honest conversation with the then Inspector. We saw the institution and the country through different eyes and it was therefore time to part ways," he said.

Hubert then joined The Bank of The Bahamas where he held numerous responsibilities including strategic planning, treasury management, corporate sales. He joined as senior manager and rose to Deputy Managing Director. He also provided oversight for the entire sales apparatus of the bank to include branches, corporate, premier banking, trust and marketing.

“In many ways I grew up at Bank of the Bahamas,” he said.

“It was in those days that the value of perseverance and the generosity of my parents become a valuable anchor on which I held and work diligently to be as much of an impact as I could. My wish is that I impacted others positively. There is though, a story I hope to tell one day, of how I found me in the midst of challenges.”

Today, Hubert is working as a consultant, building his consulting firm Next Level Solutions. Currently, the focus is in the areas of risk management, regulatory consulting, finance and training. He is a Fellow of the Association of Certified Charted Accountants (ACCA); a member of the Institute of Chartered Accountant of Jamaica (ICAJ) and Bahamas Institute of Chartered Accountant (BICA); and holds certification as a Certified Information Systems Auditor (CISA).

He is also passionate about “people and helping others grow” and for this reason, he also owns Hubert Edwards Global – a leadership, speaking, mentorship and coaching institute. This gave birth to the “Success Summit”, an economic empowerment event successfully held in 2017 and 2018. This month, he will launch a scholarship from funds garnered from the last summit, which will target a student in the inner city areas of New Providence. 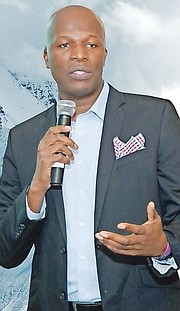 “The vision is to have a positive influence to many in The Bahamas, the wider Caribbean region and the world,” he said.

“In everything we do, we embrace the African principle of Ubuntu: I am because we are. We measure our success by the level of positive impact we have on others. We see this event as being more inspirational than motivational. Our objective is to create a mind-shift where persons start to actively think about how to chart their own success.”

Under the Hubert Edwards Global umbrella, he delivers training on leadership as a John Maxwell Certified trainer and an active Toastmaster, providing coaching and mentoring to a number of individuals, as far away as Africa, currently free of charge. Hubert is also the executive producer and host of the radio show “The Essentials!” on 96.9fm Guardian Radio (www.facebook.com/theessentials), he is a former co-host of the radio talk show - “Tell it Like It Is”, and he has also hosted the television current affairs programme “You and Your Money”.

This week, Hubert is back home in Jamaica touring a number of schools to give motivational speeches to students. He is the current president of the Hummingbirds Association (The Jamaican diaspora organization in the Bahamas); Board Member/Treasurer of International Third World Leaders Association (ITWLA); First Vice-President (currently, for second time, Interim President) of the Bahamas Institute of Financial Services (BIFS); Treasurer of Chartered Institute of Arbitrators – Bahamas Branch; and Director of the Bahamas Chamber Commerce and Employers’ Confederation (BCCEC). He has also served in various other capacities on boards of civic and professional organizations including Director of Kiwanis Club.

“It is because of the input of others, many times persons I didn't know or met only once, that I was able to make some level of progress in life,” he confesses.

“I am totally dedicated to finding ways to give back to others. With limited resources, I use my love for teaching to reach others, spending time coaching and mentoring. I have had the privilege of engaging so many people and helping them see things differently. I must confess though, that I have been the greatest beneficiary of these interactions and through them, I have over time, been able to better understand myself and create a purpose.”