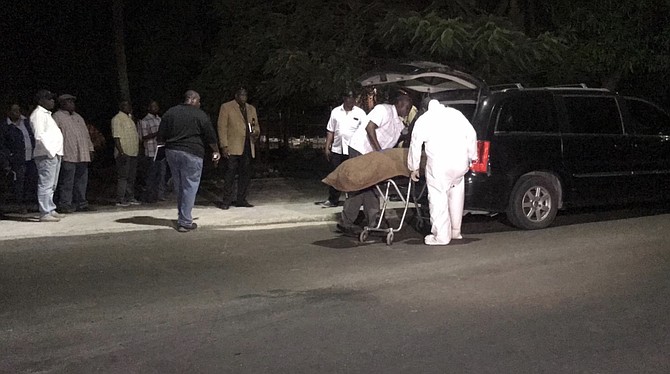 The victim’s body is removed from the scene in Fox Hill.

The death pushed the murder count to 11 so far this year, according to The Tribune’s records.

“Shortly after 8pm police responded to the area of Fox Hill Park after receiving reports that gunshots were heard in the area,” Supt Shanta Knowles, press liaison officer, said last night at the scene. “The officers cleared the park, discovered that gunshots were not in the area of the park and as they were driving west on Bernard Road, they saw a group of people running from a vacant lot ... the officers made a check of that lot and discovered a man laying with injuries to his body.”

The victim appeared to be 40 to 45-years-old she said, and is known to police, however she did not release his identity. He was pronounced dead at the scene.

With a spate of murders in the past few days, Supt Knowles was asked if police suspected the killings were part of a gang war. However she said police did not have information at the time to connect the incidents.

“Right now they all appear to be random, as in the public has no need to fear,” she said, adding police are investigating to see if there is a link to the murders and will inform the public if there is.

She appealed to those persons who were in the area of the shooting to contact police and give them information that can help the investigation.

This comes after three men were shot dead in separate incidents on Sunday and another man was killed on Saturday. Supt Knowles said police are making headway into the murders that occured on Sunday.

The first of Sunday’s three murders took place shortly after 9am on Washington Street and Balfour Avenue. The second took place around 10am on Miami Street and Robinson Road. The third happened when a man was shot and killed at Potter’s Cay Dock after 8pm.

A day earlier, on Saturday, a man was killed and another was injured following a shooting at a Haitian village off Cowpen Road. According to police reports, shortly before 1am, a group of Haitian nationals were hosting a party when two armed men emerged from bushes and opened fire, shooting two men. Paramedics were called to the scene and pronounced one of the men dead.

The other man was transported to PMH, where at last report he was listed in serious condition.

As we hide behind bars from this majority curse. . . …

Sigh...Pindling has been gone since 1992! We are still throwing our problems at the feet of Pindling?

Ingraham...Christie...Ingraham...Christie...now Minnis (though still too early to tell). Can we stop with the nonsensical bashing of a man who has not held power in almost 27 years! Geez, we sound like the old negroes in North America still blaming the white man for our problems. Let's forget the fact that we are illiterate, innumerate, reproduce and don't nurture the product of our reproduction, spend too much time bitching on "comments" sites instead of doing tangible things to better our Bahama land! By all means, blame Ping. Sheesh.

Hey titestai, I just got follow my poetic muse and she was a ubp general back in the day I think.

Can the Church say Amen my brothers and sisters.

We talk about majority rule and all the good things that it brought , but they are mostly material things, which seem to be all that matters nowadays.However I long for the good old days, when , if a murder occurred,we talked about it for weeks on end. I have to add that my late father used to require our assistance , he was a welder and blacksmith, in making 'bars' as we called them at the time. You see at that time, 'bars' were installed around windows and wrought iron doors were made for places like "Vickies" and "Ceddys", the former a house of prostitution and the latter a gambling house, for the sole purpose of keeping the police out. Burglar bars came later.