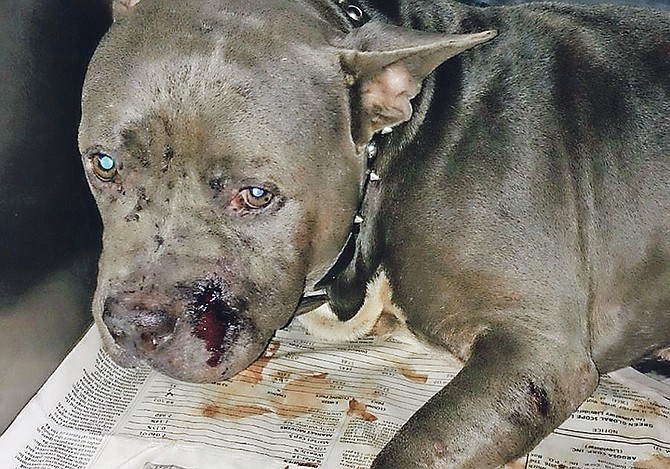 One of the stricken dogs. 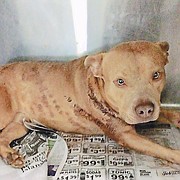 TWO dogs were allegedly shot in their owner’s yard by Royal Bahamas Police Force officers on Friday – an incident which has drawn the ire of Bahamas Humane Society president Kim Aranha.

According to social media reports, the shooting incident occurred while officers were executing a search warrant at a residence. The dogs were said to have been tied at the time and not roaming free.

Mrs Aranha told The Tribune yesterday she is “horrified” and “devastated” that “the police force would shoot tethered animals”.

She added both dogs, which are “pitbull type”, were shot twice and taken to the BHS for treatment. One dog underwent surgery yesterday due to a bullet being lodged in its jaw.

“Obviously I wasn’t there so I don’t know what happened,” Mrs Aranha said. “But I do know three things: one, that our ambulance driver had to undo the leashes that restrained the dogs in order to put them in the ambulance. So I do know categorically that the dogs were tied up.

“I do know that the dogs were injured by being shot,” she continued. “I’ve been told that the shooters were the (RBPF). I am horrified to read how many people on social media have had similar experiences. I am devastated that the police force would shoot tethered animals.”

Mrs Aranha noted both dogs were shot twice and both sustained injuries to their legs.

“But the grey one, the bullet has remained lodged in his jaw so it is quite a delicate surgery,” she added. “We are very hopeful that the surgery will be successful.

“I’m just devastated that the police would have shot dogs that were tied up. They are of no danger to you if they’re tied up — just walk out of reach…this is not target practice.”

Mrs Aranha also said the BHS has encountered such a matter before.

“I cannot actually tell you who, what, where, and when. But this is not the first time we’ve had a dog in that’s been shot by the police.”

She went on to underscore the “horror” of “shooting an animal that is tied, can’t run away for cover, can’t get away.”

“And as it was tied, was posing no danger,” she added.

Mrs Aranha noted that the cost of the treatment is expensive.

“I have had no contact with the (RBPF), but I will be sending them the bill,” she added.

The RBPF did not provide a comment on this incident up to press time.

That is what you get when your police force is uneducated thugs.

Just another example of how we are a banana republic.

I fail to see how anyone can be proud in our pathetic little nation..

Perhaps we can be proud of our nations beauty; though thats something we can take no credit for......

Bettter in the Bahamas, what is?

There is something very disturbing about a member of the State's security forces killing innocent
animals that pose no threat. The officer who carried out this heinous action should be subjected to a thorough psychiatric evaluation to determine if he, or she, is a fit and proper person to be loose on our streets while armed with a deadly weapon.

There is a fine on the book for cruelty to animals and these officers need to be charged and made to pay it.

They then need to have a psychological evaluation to determine if they are mentally competent to be allowed to carry a weapon.

Yes or no, not dismiss shooting backyard dogs but more outrage than over the 11 or so comrade humans shot by policeman's, yes, no?

Pitbulls are not gentle. They are dangerous dogs. If they were so gentle they would not have been tied up.

These dogs were bred and trained to attack on command. Believe when I say neither Kim Aranha nor anyone else associated with the Bahamas Humane Society would have immediately responded to a police call to somehow sedate these threatening and most dangerous dogs. Had one of these dogs managed to break free of its leash and viciously attacked a police officer, I seriously doubt Kim Aranha (or The Tribune Editorial staff for that matter) would have been so concerned.

Yes, or no never once heard Humane Society president comrade Kim to asks - what life must be likes when you're a 'Chained Backyard Dog'. We needs campaign educate dog owners "Not Be Chaining Ya Backyard Dog'. Yes, no unless you wants suffer an equal penalty when Judges start chaining dog owners?

The law clears everything up, its good to know it.

Ch. 84-Penal Code 161. A magistrate may take cognisance of a complaint that a dog is dangerous, and not kept under proper control, and if it appears to the magistrate that such dog is dangerous he may make an order directing the dog to be kept by the owner under proper control or destroyed, and any person failing to comply with such order shall be liable to a fine of five dollars for every day during which he fails to comply with such order.

(4) Any peace officer may destroy on sight, or may cause to be so destroyed, any dog which he finds injuring any other animal or worrying sheep, goats or poultry.

The fine is small, but even though the dog was tied, he was still unmuzzled, that would play a major role in the outcome, because he may still get loose aahahah, I agree it kinda funny that fine, better to work with the 20 days ahaha

My people still will not be independent in their thinking and not be dense in their reasoning skills. For example, the helpers met the dogs tied. . .but cannot say if the dogs were always tied. . .or shot and then tied to prevent having to shot them further if they attempt to attack again. . .where they tired in reach of the entrances of the home. . .making the approach of the doors by police dangerous and what kind of public service persons go around wantonly shooting tied and or sleeping dogs that pose no threats to their persons. . . then call the HS who will come there talking smack about cruelty to animals? Yinna see how dumb and childish just jumping to conclusions and assuming guilt or innocence. . .who is dimwitted, at fault or have ulterior motives sounds when common sense is loaded to bare on information?? Further more. . .of course you will meet them dogs laying down and calm after getting two shots apiece in their backside if they were carrying on. . .which is expected from those dogs if a stranger comes into their yard. . .that's why criminals tend to get those type of guard dogs. . .they were breed to attack, kill and protect. That breed is banned from certain jurisdictions around the world for the reason that they are dangerous and have the power to kill small persons, old people, children and other dogs. They are named pit bulls because they were breed only to fight to the death in a pit with other pit bulls!!! They are useless as anything else but fitting to kill dogs.

licks2, before you go around calling people "dense", I suggest you learn to spell...oh, and the proper use of subject-verb agreement should also be on your list of things to do. But, what the heck do I know, with my "dense reasoning skills."

Tell me about it ma comrade, so right, grimmer and spelling importunity for hereto Tribune readers follow trend thought, yes, no?

No need to be snooty......not all of us were fortunate enough to be educated at good schools.

You don't have to go to good schools to have common sense!! By the way. . .what is a good school? Most brilliant persons did not "learned" to be brilliant in a school. . .so to speak. . .they simply determined to be best at any skill available to them. . .a jackass they refused to be. . .NO MATTER THE REASON. . .most of you are "bound" by your agenda. . .political or otherwise. . .this traps you in a "one tracked" mind set. . .therefore when the information required divergent thinking to come to the best conclusion most of yinna start talking stupidity. . .then row us when we don't see it as common sense brilliance! IT HAS VERY LITTLE TO DO WITH A SCHOOL. . .AN OPEN MIND WILL GO A LONG WAY THOUGH!!

You havta blame the computer for them bad "spellin and grammar" skills there so. Erry time I write sometin and it put one red line under um I does jus clik the ting so. . .or sometimes I does be writin too fas. . .boom. . .wrong spellin or grammar tense. . .but I will try to do better in the future!! I don't think plenty of yinna "are actually" dense. . .but for some reason most of yinna act like yinna does leave ya sense home when it comes to discussing politics. . .talking total jackassness with no respect for common sense dialogue. . .all kind of political dumb crap!

Dogs should rise up and shoot the sickos back, better yet take the sickos' weapons and release a pack on them!

It is no secret that Police are well known neanderthal A$$holes.

Their superiors treat them inhumanely, and consequently, the cops pass that treatment, disdain, and same uncaring treatment onto the general public!

Not one of you alluded to being on the scene, but commenting like eye witness news. A dog is an animal. I am aware that some people, especially white folks, are kinder to dogs than people. I don't care how much you pamper your pet, spend more on their upkeep than the average worker make in salary, leave millions in yinna will for the pet, it is still a gaddamn dog ( animal)! A man can almost descend to the level of a dog, but a dog can NEVER ascend to the level of a man! I don't give a shit what yinna sanctimonious animal lovers think, sometimes yinna does piss me right off! I do happen to like dogs too!

Hey Easternhate, Feel better now that you got that off your chest. How dare these so-called white people treat their dogs well. A dog's loyalty, devotion to, and trust in it's carer has to be experienced. Most people will let you down and betray you but a dog never will. Most people will never be grateful if you help them but a dog always will. Dogs rule.

So in the scheme of things, where do you place Christie?

Never mind pass or fail, has any police officer ever been subjected to an IQ or emotional intelligence test?