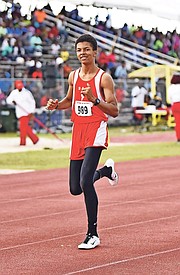 THERE were at least seven qualifiers for the CARIFTA Games over the weekend at the Roadrunners’ 13th annual Dianna Lynn Thompson Classic at the Thomas A. Robinson Track and Field Stadium.

Leading the way was Megan Moss in the under-20 girls’ 400 metres. The Red Line Athletics quarter-miler ran 53.98 seconds for her victory. She was joined by Jasmine Knowles of Alliance Track Club, who was second in 56.22 to also go under the standard. 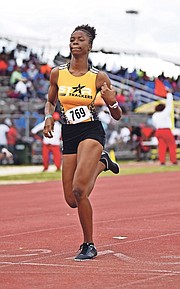 Moss, moving up from the under-17 division, also contested the 200m, winning the half-lap race in 24.74, but it was off the qualifying standard.

Akaya Lightbourne of the Kenyan Knights also did the qualifying standard in the under-17 girls’ division when she won the 1,500m in 5:15.66.

Also surpassing the qualifying standard on the ladies’ side was Rhema Otabor of the Blue Chips Athletics in the under-20 girls’ javelin with a 39.55m (129-09).

Otabor also competed in the discus, but her winning heave of 27.24m (78094) was short of the qualifying standard.

There were a few more on the men’s side, who are also looking to head to the Cayman Islands over the Easter holiday weekend when the Bahamas Association of Athletic Associations selects the national team to travel.

Heading the list was Miles Yallop of Macie Wood out of Grand Bahama. He won the under-15 boys’ 800m in 2:06.76 to qualify. Keyshawn Strachan, who already qualified in the under-27 boys’ javelin, did it again in the same event as well as the discus. 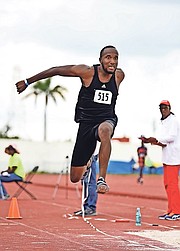 In one of the highlights of the meet, twin brother Lathone Collie of Leap of Faith made his return to the local scene by winning the open men’s triple jump with a distance of 16.99m (55-9).

Zaria Fraser of Fast Forward had one of the outstanding performances in the age group division as she doubled up in the girls’ under-11 sprints, winning the 100m in 14.68 and the 200m in 30.06.

Also picking up a pair of victories were: