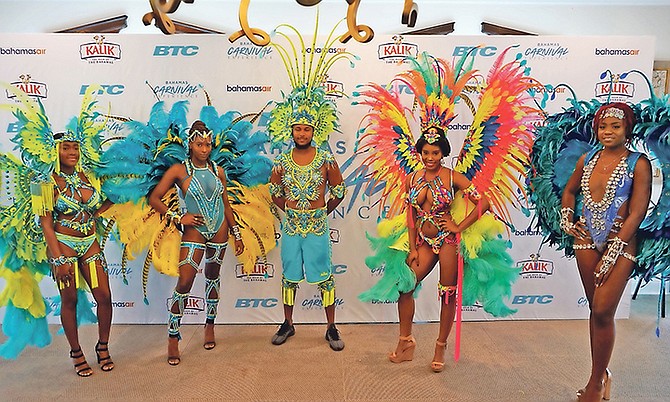 BAHAMAS Carnival will return to Clifford Park for its fifth year with organisers keenly focused on drawing international crowds to the growing parade. Organisers yesterday announced the parade will take place on May 3-5, with soca stars Machel Montano, the Fireman Bunji Garland, and the queen of bacchanal Destra slated to return as well.

“We always aim to increase our patrons experience, and what we are doing different this year is really putting a keen focus on international stop over visitors to go with our already large domestic crowd,” said Sebastian Bastian, Polantra Media Group.

“So we partnered this year with Bahamasair, Breezes and some other hotel partners and putting together these packages to subsidise to defray some of the cost of the revellers that we are anticipating to come in and experience carnival 2019 and, of course, the show.

Mr Bastian highlighted the extensive list of both local and international artists he hopes will be there. He said: “We have a lot of plans, a lot of exciting and new things and additions we will be adding to this year’s line up...the head liner will be announced in short order. Revellers can expect an experience like no other.”

Rafel Dean, Band Association president, pointed to a consistent increase in international visitors during Carnival week over the last four years, and the increase in revenue for small business owners during parade season.

Mr Dean said: “This increase translates into economic peak in the country during that time period. In addition to this new money that was circulating in the economy. Several small businesses and entrepreneurs have seen a significant increase in their financial statement during these times.

He continued: “Neighbourhood vendors along the parade route both had an increase in finances during the carnival season due part to revenuers and spectators near the various party routes. This year will be a slight change in the route. It will start at a familiar location and it will end at the same familiar location, but it will increase to allow more spectators the opportunity to view the parade, vendors to make money and allow for masquerades to have a longer time on the road.

Mr Dean said: “This decision was made based on the feedback from

Yes, or no comrade Sebas, why not be straight to not call it Bahamaland Carnival, but Trini Kanaval, yes, no?

Carnival is big business. Think of the number of carnivals in the Caribbean, not to mention Miami, Toronto and Notting Hill (UK) and the big one in Brazil.

I agree with Bahamas Carnival. Done right it has potential.

Ma comrade, Toronto's Carnival from year one have been reeked in negative controversy, infighting, mismanagement including unexplained spending monies, yes no? Canada's National government have never contributed a red penny from PublicPurse's monies towards Toronto's Carnival, yes, no? Yes indeed, even T & T's Trini's Carnival to this very day is being operated deep under water in red inks, yes, no?

Just please don't bring this bra and panty stuff to junkanoo. I should say stop trying to insert it subliminally to sell the argument that there's no difference in the costuming. One day they will wake up and decry the cultural negatives from this and gambling and wonder how we got here