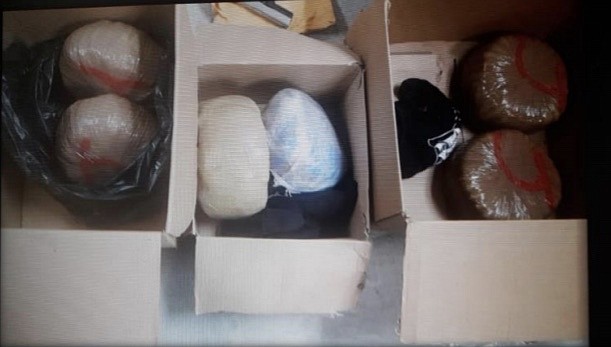 Suspected marijuana and a firearm were found on the mail boat.

Six mail boat crew members are in police custody after a firearm and a large quantity of drugs were found on their vessel on Friday night.

According to reports, shortly before 8pm, South Eastern Division and K-9 officers searched the mail boat at Potter’s Cay Dock. They discovered two taped boxes containing six packages of suspected marijuana, a pistol and a magazine with 11 live rounds of 9mm ammunition.

The estimated weight of the drugs is 30 pounds. Five men and a woman were taken into custody for questioning.

These poor innocent traders quietly going about their inter-island business, suddenly accosted and arrested by the jack-booted gendarmerie. Don't these inquisitors know that in most, so called "civilized societies", a little pot is now legal. ---- Oops, sorry, I forgot we are not one of those societies----- silly me.

Sheeprunner you right. Somebody ratted them out!!!!!!

actually they do check the boats for immigration violations and look for drugs too. not everyday, but they do.

the mailboat helps a lot of people for low cost freight and transportation.

to send a single envelope on bahamasair is 23.00 plus vat. on the mail boat is 3 dollars plus vat.

My friend far be it for me to disagree with your post. However not a month passes when I take the mail to to Harbour Island, Governors, George Town, etc. Never once in all these years Did the authorities ever check the boat I was on. I ride the Current Pride weekly, the only passengers are Haitians. _ Are there any checks by the Gestapo ----- never. So actually you are incorrect.

well i was there when immigration and police came on the boat. there were bahamians, mad dogs and englishmen on the boat.

Why isn’t the boat named?

ondrape ??? I think you must fit either of your last two categories. The boat is not named because its the " Marie Celeste".; or was it the Black Pearl?