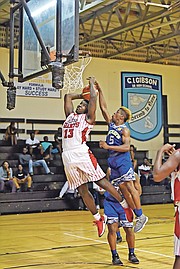 THE Rockets got a 122-119 win over the Giants in NPBA action at C.I. Gibson Gymnasium over the weekend. Photo: Shawn Hanna/Tribune Staff

THE New Providence Basketball Association closed out play at the CI Gibson Gymnasium over the weekend and will resume competition at the AF Adderley Gymnasium on Wednesday.

The league was forced to play at CI for the past two weeks to accommodate the prestigious Hugh Campbell Basketball Classic for senior boys. As play pick up at the AF Adderley Gymnasium, teams will be jockeying for the playoff spots heading into the final few weeks of regular season play. In games played over the weekend, the Sun Oil Rockets soared past Your Essential Store Giants 122-119; the Triple K Stampers stomped the Basden Elevator Elites 101-87 and the Fort Charlotte Defenders got by the Caro Contractor Pirates 87-76.

Crosley Wilmore exploded for a game high 33 points with 12 rebounds, five steals and four assists to pace Sun Oil to their big win on Saturday night.

In a losing effort for Your Essential Store, Adrian Thompson canned 30 points with 14 rebounds and eight assists and Herbert Knowles had 27 points and eight rebounds. Cameron Strachan came off the bench with 14 points and seven rebounds.

Bertrum Minns came off the bench and lit up the nets for 18 points, eight rebounds, three steals and two assists to lead three other players in double figures for Sun Oil.

Cameron Chery had 15 points and eight rebounds, Craig Gibson had 14 points and four rebounds and Crosley Wilmore chipped in with 10 points, six rebounds and five assists.

Altidor also had 12 rebounds, five assists, two steals and a block shot, while Joseph added seven rebounds and as many steals with five assists.

Donte Deveaux (seven rebounds) and Alfred Smith (eight rebounds) off the bench both helped out with 12 points, but it wasn’t enough.

In a losing effort, Dominique Fernander had 19 points and 12 rebounds with three assists, Elvardo Burrows had 13 points, Anthony Whylly came off the bench with 12 points and 10 rebounds and both Christoff Stuart and Donathan Johnson had 11 points and five rebounds each.

Top two in each division

get a bye in the 1st round