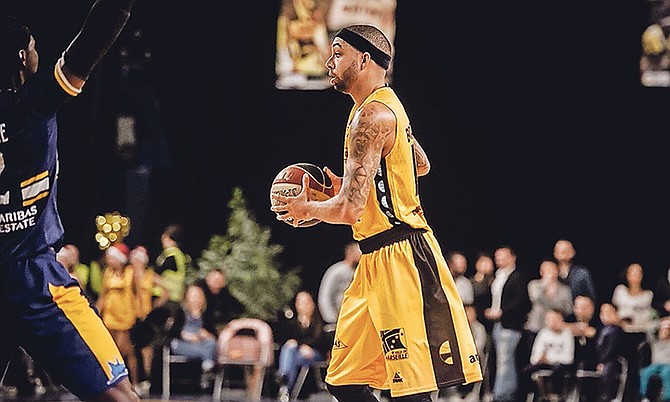 HAVING taken advantage of the opportunity to make a living playing basketball outside of the National Basketball Association, Jaraun ‘Keno’ Burrows said he’s trying to provide an avenue for some of the other young, talented Bahamian players like Domnick ‘Nardo’ Bridgewater to follow suit in France.

Burrows, playing professionally in his 11th year, now with the Fos-Provence Basket, is averaging 11 points and five rebounds in 22 minutes. At the same time, he has assisted in getting Bridgewater set up to play in a developmental programme in France and he’s hoping that he can get a few more to join him in the future.

For now, Burrows’ concentration is on Fos-Provence, who advanced out of the ProB League of the France Basketball League last year as the champions. They are currently 4-11 in 17th place in their promotion to the ProA League. Burrows noted that it’s not an easy league with a number of former NBA players competing, including Devin Ebanks, formerly of the Los Angeles Lakers.

“Since last year, we won the second division in France, so the team moved up,” Burrows said. “We had a slow start to the season, adjusting from the second league to the top tier, but after 5-6 games, we started to settle in. We lost three games in a row, but we hope to turn things again this year.

“For me, it’s all about getting healthy and I feel good about the level that I am at. I was feeling good before I got hurt and I just want to get back to it.”

For the past 6-7 weeks, Burrows was nursing a tear in his ligament in his left ankle, an injury that came as a setback to what started as a promising season, scoring 21 and 18 points respectively. With the team off for Christmas, Burrows decided to make a quick trip home. Fos-Provence will be back in action on January 12.

“With this being our first year in this top division, our main goal is to get to the playoffs and on the low end, to stay in the league because at the end of the season, the bottom two teams get relegated to division two. That’s the goal, to try and keep the team in the division and for me, just to keep pushing and have a great year.”

At the end of the season, Burrows will become a free agent, but he’s hoping that he can secure another deal to remain with the team.

“When I came out of college, I had my chances (to play in the NBA). I did some workouts and I went to the D-League,” Burrows said. “Once that didn’t work out, I needed a job. Europe offered me a great opportunity to travel and still make money doing what you love.

“Maybe when I was younger, I would have preferred to stay in the D-League because they are offering much more money than they did when I was there. But now that I have children and my résumé is great in Europe, I’m comfortable. I’ve adjusted to the European life. I’ve been in Europe for 11 years, France the last three, Israel right before that, Sweden before that, I love it. Europe in the winters and home for the summers, I can’t beat that.”

Home last year to participate in the FIBA Home-And-Away series for the World Cup Qualifier, Burrows said it was disappointing that the Bahamas didn’t advance, winning just one of the six games played.

“I think the format hurt us more than the other countries,” he said. “The other countries have a much deeper roster of professionals. After you get past our NBA and college guys, who were not allowed to play in the first two rounds, we don’t have as much high level professionals as these other teams. “But I think under the format that is going to be for the Olympics where you can bring your full team to all of the qualifications, you talking about a whole different thing. We all know, FIBA and the world know when we get Buddy (Hield), Deandre (Ayton), Kai (Jones) and Sammy (Hunter) and me and we put this team together, I think the Bahamas is going to do great things.”

Burrows, 33, urged the Bahamas to simply just “trust the process” and keep believing that the Bahamas will be in the Olympics and the World Cup.

As for the future, Burrows said he’s taking Bridgewater under his wings and is preparing him to become the next pro player in Europe. Bridgewater has been in Europe since September and, according to Burrows, he has added 3-4 pounds of muscle and he has taken off.

“After we won the championship last year, my coach asked me if there was any talent in the Bahamas and send him some video and stuff to see if he can get him into our academy programme,” Burrows said. At first, I didn’t really know who we could reach out to.

“But after I talked to a few persons and realised that not everybody can and will go to school, especially because of the restrictions they have to go through with their visas, I thought it’s a good way to go with what they are doing in France where they are bringing in the African players into their programme and grooming them to become professionals.”

Bridgewater has set the stage for the Bahamian version of the project and he’s in Fos-Provence junior developmental programme where he’s training twice in the morning and the afternoon with a skills and performance coach.

“His development is unbelievable,” Burrows pointed out. “He’s leading his team in points, rebounds and assists and I’m already receiving calls from agents and other teams around the league. Right now, Nardo is all about development. We still don’t know what his ceiling is because he’s such a rare product and he’s growing so fast.

“But I see a two-year programme and hopefully on the best side, he can sign a great professional contract and on the low side, he can make enough money to support himself and his family for years to come off basketball. That is the plan. I want to keep fresh young men in the programme, give these boys another route.”

Bridgewater, who turns 19 on May 14, is just the first step in that direction.