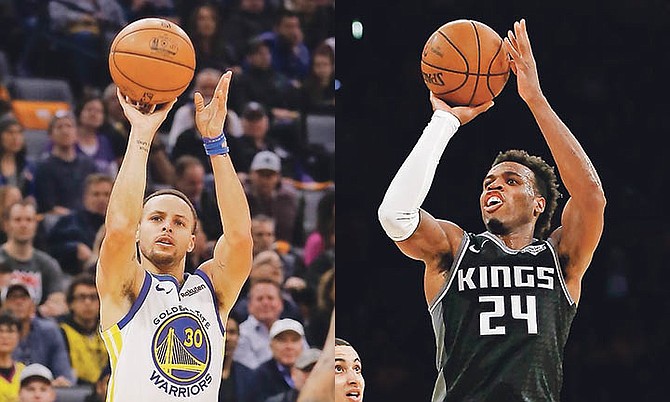 THE record-setting three-point shooting display put on by the Golden State Warriors and the Sacramento Kings garnered league-wide attention and continues a season of milestones for our very own Chavanno “Buddy” Hield.

Warriors MVP point guard Stephen Curry, who has set his own share of three-point records, acknowledged Hield as one of the league’s elite shooters following their matchup at the Golden 1 Center in Sacramento, California, on Saturday.

“He’s a great, great shooter, he showed that tonight and he’s consistently gotten better since his rookie year,” Curry said.

“He’s just confident, they got a lot of guys that can space the floor but Buddy shows how great of a shooter he is, so yeah, he’s got it.”

Hield scored 32 points on 12-21 shooting from the field, including a career high 8-13 from three.

“Everyone got everyone’s best shot. We came and played out at a high level we just couldn’t find a way to beat those boys, they’re tough,” Hield said. “We’re not too far from them, just a couple possessions off. They sense it, it’s going to come, might not be this year, maybe next year but it’s going to come.”

Hield had five threes in the third when Sacramento turned an 81-73 deficit into a 103-96 lead. However, he had just a single field goal make in the fourth quarter.

“Klay is a great defender and the ball was moving for us on offence. [Justin Jackson] was hot and I didn’t need to shoot those same shots I did earlier,” Hield said. “When coach called a play for me Klay defended well so it’s all in the flow of the offence. KD didn’t put up much shots in the fourth quarter either, I think it was three and he made all three. Those guys are champions, they did what they do best.”

The Kings are currently ranked 10th in the Western Conference at 19-20. “They respect us, they know not to play with us like that, last game Durant and Klay didn’t start the fourth quarter but they all started the fourth in this game,” Hield said.

“It’s one of those games you want to compete in but you want to be on the winning side. We’re going to figure it out. I think everyone in the league knows we can compete.

“I think we’re a good team now but to be elite, we got to lock in and finish those possessions, get stops on defence and grind it out. We have a good stretch coming up. No disrespect to no teams in the NBA but these are games we have to win.”

The third-year guard continues to post career numbers at 20.5 points, 5.1 rebounds and 2.4 assists per game.

“I’m ok, not where I want to be but I always think there’s more I can do. I put pressure on myself to be the best I can be. The franchise trusts me to go out there and score the basketball, that’s my job,” Hield said.

Kings head Coach Dave Joerger said Hield continues to be one of the catalysts of the Sacramento offense thus far.

“He’s playing well and kept us in some games lately until we get going or find some other scoring. He’s been terrific, really excited about the growth he showed,” Joerger said, “We’d love to find a way to get him to the foul line a couple times but I can’t find fault in much of anything. He’s competing at a higher level defensively which is impressive to me, playing with the pass more and trusting his teammates.”

On the prospects of facing the Warriors in a first-round matchup, Hield was intrigued at the possibilities.

“It would be dope, we’ve got to get there first though,” he said, “We’ve got to win some more games for that.”