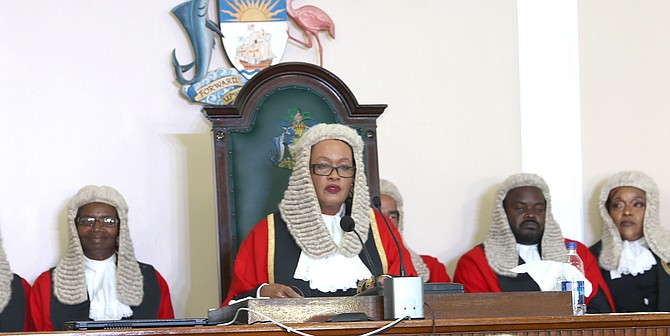 THE country’s top judge has lamented the government’s failure so far to appoint a substantive Chief Justice, claiming that such a blight has proven to be a “tremendous challenge” for the judiciary in making any long-term plans for the future.

Acting Chief Justice Vera Watkins, speaking at the opening on the 2019 legal year, said she has been placed in a “tenuous position” given the government’s silence on the appointment, adding that it makes her unsure as to “whether I will be sitting in this chair later on today or tomorrow morning”.

She also regretted that there had been no appointment of a substantive Chief Justice for eight months, citing the amount of time it took for former Chief Justice Stephen Isaacs, who died recently, to be appointed to the substantive post after his predecessor, Sir Hartman Longley left that post to become President of the Court of Appeal.

In doing so, ACJ Watkins echoed similar sentiments raised by Bahamas Bar Association President Kahlil Parker, who said the “proliferation of acting judicial appointments” has been a “deleterious effect on both the perceived and the actual independence of the judiciary, which compromises its ability to function as a check and balance against the other two branches of government”.

The opening of the new Legal Year

He said the Bahamas Bar Association “will not silently abide the invisible tether” ACJ Watkins’ and “other acting appointments represent and represented upon our Chief Justice and other justices of the Supreme Court and Court of Appeal”.

ACJ Watkins was sworn in to act as Chief Justice in early September.

Earlier this week, Prime Minister Dr Hubert Minnis said the country will know in “very short order” who will be appointed to the post of substantive Chief Justice. However, the prime minister was tight-lipped on when the pick would be made, telling The Tribune he did not want to commit to a timeline and that it would be dealt with at the appropriate time.

“There are names that have been moving through my head, but I have not moved them yet from my head to any paper,” Dr Minnis told The Tribune.

And Wednesday, she said, “I am sitting in the same chair and presiding over the opening ceremony in the capacity of acting Chief Justice”.

“The indisputable fact is that while it may be so that I am sitting in this chair as acting Chief Justice at this moment, I am not certain as to whether I will be sitting in this chair later on today or tomorrow morning. As a result of the tenuous position in which I find myself, it may be a futile exercise to make any long-term plans for the judiciary”.

Meanwhile, Mr Parker said Chief Justice Watkins has the “unenviable task of projecting aspirations for the year from a Constitutional post” which she has “no way of knowing whether she will continue to hold tomorrow”.

“As a Bar we have been at pains to demonstrate to the public why it is that the proliferation of acting judicial appointments has a deleterious affect on both the perceived and the actual independence of the judiciary, which compromises its ability to function as a check and balance against the other two branches of our government,” he said.

“…The Bahamas Bar Association will not silently abide the invisible tether which your, and the other acting appointments represent and represented upon our Chief Justice and other justices of the Supreme Court and Court of Appeal. While it appears that some may not appreciate why this is important, they ought to reasonably be guided by those of us who do understand”.

Yes, or no - try relax comrade 'sister' Vera, so as not let your sugar levels climb.... cause ether Brian M, or Janet B,, soon be summoned by our beloved Her Excellency Marguerite to begin the steep climb up Mount Fitzwilliam be duly and constitutionally substantive CJ sworn-in. Yes, no both have passed their medicals?

They need to do away with the wigs. Use fussier neck ties if they want to show levels.

We should always keep the wigs and gowns and ceremony. It holds continuity and substance. I am proud and will always hold on to our traditions and ties with Great Britain.

I'm not sure if you're joking or not...but anyway... It reminds me of the girls who wear the remy hair down to their hip and swish it about as if they've forgotten that it's not even their hair. It's a thing that says that your status or quality as a justice, lawyer "whatever" is not tied to that archaic thing on your head that has zero links to your true identity. Take it off, give it a decent burial, thank the queen for her help such as it was and then show the court your quality by what you do, not the price you paid for the wig. I can imagine there is many an aspiring lawyer who's just waiting for the day they too can wear a white wig and parade downtown in a full wool suit and long robe with wig in 90 degree heat, they've probably already determined what style they want and how they'll save their first pay cheques to get it....it just seems substanceless

AS A SOVEREIGN ...INDEPENDENT NATION....IF BAHAMAS ARE GOING TO HOLD ONTO TIES AND TRADITIONS OF OUR FORMER COLONIAL MASTERS.....?...WE CANNOT ONLY HOLD ON TO A FEW SELECT ONES.....BUT ALSO THOSE .....LIKE POLITICIANS AND CIVIL/PUBLIC SERVANTS RESIGNING.....IN FACE OF MERE SCANDALS ..IMPROPRIETIES.....also have the full slate of other traditions...taxes for the rich...protections for the pore....good schooling system.....etc...

Don't tell me thats a wig. I thought that was the real hair. I need a drink now!

"Acting Chief Justice Vera Watkins, speaking at the opening on the 2019 legal year, ..."

"Prime Minister Dr Hubert Minnis said the country will know in “very short order” ..." So? The legal year could have been left closed, but to open in "very short order".

They sit back and collect, we toil sweat and die.

Could not of said it any better, spot on!

Not only do we need a new CJ, but more judges to speed up the hearing of civil cases. Minnis shows where his priorities are by the decisions he makes and making the judiciary more effective and efficient is not one of his priorities!

It's hard to get kickbacks from judges' salaries - much easier from jeeps dem.

Yes, or no TrueBlueBahamian - like I have been practicing for a month now in event we beloved Queen's passing, not only will Her Excellency Marguerite decree a 15 days state of royal mourning which will brungs colony's official government's business to complete shutdown - won't all we loyal subjects not have learn sing new word changes motherland of England's national anthem which will have to change from "God Save The Queen" to become "God Save The King," and don't forget as Charles ascends to the throne rule over we colony of out islands - Camille be becoming we new beloved Queen to King Charles. Yes, no?

Yes,or no be a well worth watch see extent which Erica the new lead propagandist appoint to PMO - can restrain PM from going all ballistic on acting comrade 'sister' CJ Vera's critiquing - how and when new CJ gets appointed. Yes, no?

They are all full of shit, the Judiciary and the Bar Association. They are imbued with the pomp and pageantry of their profession. Just hanging around for pension and other appointments!