Face To Face: Nurse Ophelia - A Legacy To Be Proud Of 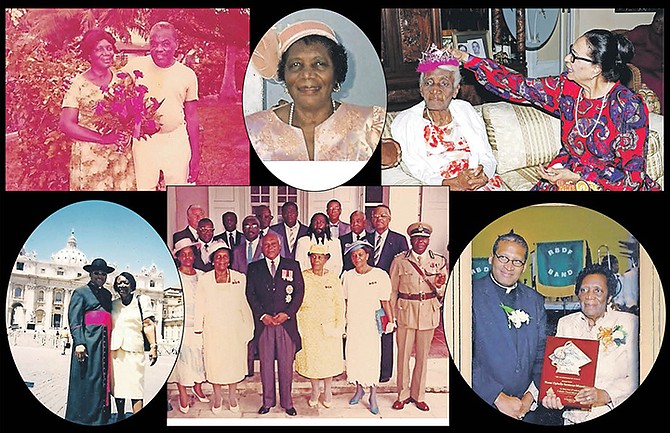 Life and times of Ophelia Munnings – Clockwise from top left: with her husband Basil “Boots” Munnings; in her younger days; celebrating her 100th birthday with Dame Maguerite Pindling; receiving a church award for her dedication to music; receiving the MBE; touring Rome with her priest.

It was such a pleasure as well as an eye-opening experience sitting face to face with a centenarian who could converse with me, smile with me and sing with me. She reminded me of the simpler things in life. She helped me to put things in perspective and consider what really matters in old age – family who love you, spend time with you and are willing to take care of you - and a legacy that they can be proud of.

Indeed, the children of Nurse Ophelia Munnings are proud of her legacy as a caregiver – one of the pioneering nurses in The Bahamas who has done much to enhance her profession on a national level. This mother-of-eight turned 100 on January 19, and Governor General Her Excellency Dame Maguerite Pindling visited her home to spend time with her, appreciating her for who she is and what she has done for her country. The day after, I had the opportunity to spend time with her myself and celebrate this rare milestone in life with her at the home of her son, Ruiz and his wife, Ingrid where she resides.

When I asked her for her name, she replied: “Ophelia Theresa Gertrude Seymour-Munnings!” She also gave her parents names: James “Jimmy” Seymour and Celestina Seymour. She said she was born in Staniard Creek, Andros and that her father was a farmer. She could remember eating lots of native fruit such as watermelon, avocado and sapodilla on a farm “full of tall trees” and picking peas and shelling them for her mother to make dinner.

When asked why she decided to be a nurse, she told me she had seen the nurses who came to her settlement to offer health services to the community, and “they were very good” and educated residents on “religion and health”, inspiring her in what would become her lifelong career. She recalls that she left her family in Staniard Creek at a young age.

According to a short documentary produced by her grandson Rolston Munnings, Ophelia was just five-years-old when she was sent to New Providence to attend St. Joseph’s Catholic all-age school. She became a teacher upon graduation but shortly thereafter, she left to join the nursing programme at what was then the Bahamas General Hospital. Outstanding in her classes and committed to her vocation, Ophelia was then sent to Grand Bahama to become the first trained nurse to reside on the island and provide healthcare services. There, she met the love of her life, Basil “Boots” Munnings, whom she married at the age of 25, back in 1944. They were married in Nassau at St. Francis Church Cathedral. Eventually, the couple returned to New Providence where they raised eight children – Ruiz, Kendal, Mary, Basil Jr, Janice, Carmen, Lynette and Shelly. Kendal and his wife, nurse Debbie Munnings accompanied me during my visit with Ophelia, and it turned out to be a wonderful afternoon in a beautiful home with an amazing woman. She spent 54 years in nursing at what would become the Princess Margaret Hospital and according to Rolston, was responsible for delivering “an innumerable amount of babies”.

After telling me a bit about her life, Ophelia started reciting a nursery rhyme about a cat and mouse at a farm that I had never heard before. After that, nurse Debbie asked her to recite her favourite poem, Patience. I was in awe not only at the fact that she could remember every word, but at how good of a performer that she was, reciting each line with vigour:

Patience is the Guardian of Faith

The preserver of Peace

The cherisher of Love

The teacher of Humility.

Subdues pride, she bridles the tongue,

Restrains the hand, Tramples upon temptations,

Behold her appearance and her attire.

Her countenance is calm and serene as the face of heaven,

And no wrinkle of any anger

Is seen on her forehead.

Her eyes are as the eyes of doves for meekness,

And on her eyebrow sits cheerfulness and joy.

She is clothed in robes of the martyrs

And in her hand she holds a sceptre

In the form of a cross.

She rides not in the whirlwind

Or a stormy tempest of passion.

Her throne is the humble and contrite heart

And her kingdom is the kingdom of peace.

Nurse Ophelia is a devout Catholic who became one of the founding members of Holy Family Catholic Church on December 31, 1987. She played the organ there for 25 years. With this kind of history I had to ask her if she had a favourite hymn and sure enough, she said she had many, but chose “How Great Thou Art” as the one she wanted to sing. We sang the hymn together and once again, she left me in awe as she started harmonising with me. What a precious moment!

She was an active member of the church and travelled around the world with the church, including to Israel, Holland, Mexico, throughout the United States and to Vatican City.

Reverend Monsignor Alfred C. Culmer called her “a woman of tremendous faith and a joyful gift to her family, the Church and the nation”.

She was honoured at a special mass at Holy Family this past Sunday where Monsignnor Culmer told her: “You are a woman of substance, of faith, of service and of virtue. You have nurtured your children and formed them in the way of God. You have served our local church in the music ministry for many years, coming through the rain to ensure that the music ministry is alive and active for our Sunday Eucharistic celebration. You have gone into the homes and lives of many in the land through community nursing. It is indeed a grace and a privilege to join with you and with your family in giving thanks to God for this milestone in your life. God has blessed you with long life and has afforded you the opportunity to praise Him for these 100 years of God’s favour and goodness.”

Nurse Ophelia was once in charge of the female ward at Bahamas General Hospital before being sent to Grand Bahama. For four years, she treated factory workers at the seafood factory in West End and made periodic visits to Eight Mile Rock, Smith’s Point, High Rock, Sweeting Cay and Waters Cay. When she returned to Nassau, she worked with the Red Cross in district nursing. After this aspect of community nursing was taken over by the government, she was assigned to the Blue Hill Road Clinic where she worked for 27 years. During this time, she was promoted to Nursing Sister-in-Charge of the clinic until her retirement in 1979. Upon retirement, Nurse Ophelia was asked to organise the Gambier clinic and served as head nurse there for ten years. She had the responsibility of ensuring that all of the children in Gambier and Mount Pleasant villages were immunised. She performed house to house visits daily to administer treatment. She also performed nursing services at the Bilney Lane Clinic before finally retiring from active nursing in 1989.

Queen Elizabeth awarded her with an MBE – Member of the British Empire for her service to nursing in The Bahamas. It was presented to her by former Governor General Sir Gerald Cash in 1987. Her husband passed away six years earlier.

Her good friend of more than five decades, 83 year-old Fredericka Butler confirms how unselfish Nurse Ophelia is. They were once neighbours and she witnessed many of her friend’s selfless acts. They formed the Bahamas Retired Persons Organisation, a group which is still in existence today. Mrs. Butler is a singer and performed for Nurse Ophelia on many occasions at church and civic functions at her request, and she accompanied her by piano. She recalls that Nurse Ophelia would often organise skits and plays and host recitals, and that she was “very good” at performing. The Bahamas Retired Persons Organisation is gearing up for its annual Valentine’s banquet and has enjoyed successful activities such as seven day cruises and community drives held first under Nurse Ophelia and now Mrs Butler.

Retired Nurse Brenda Simms called Nurse Ophelia a “pioneer in nursing”. She met her in 1963 and recalls that the centenarian was always “an extraordinary nurse and a forward-thinking person”.

“In the 1960’s when we were moving towards Independence, she was hard at work to make the nursing profession properly recognised in the country,” Nurse Brenda said.

“She wanted nurses to be properly registered and was among four senior nurses who took observatory courses in Jamaica. But she felt nurses should get further training. She pushed for a public health course for nurses in Nassau.”

That came to fruition and today, aspiring nurses can be fully certified through a four-year programme at the University of The Bahamas.

Such an inspiration. She represents all that we should aspire to be as citizens of the Bahamas.