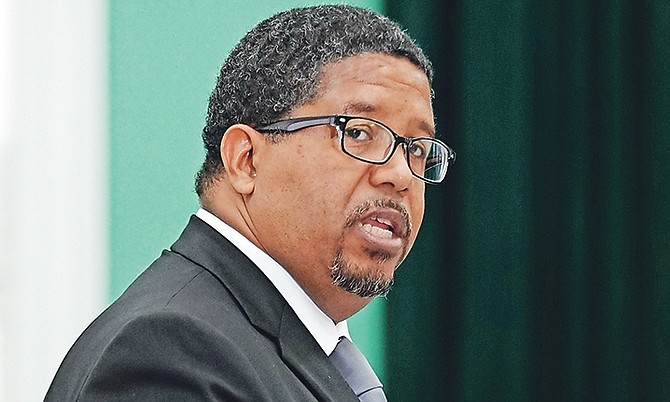 THE country’s unemployment rate has increased since November 2018 despite the addition of just over 2,300 jobs to the labour force.

Eight months ago, the rate was 10 percent, but as of November 2018, 10.7 percent of people continue to be unemployed.

This increase was further compounded by the fact that unemployment in New Providence also climbed from 10.1 percent to 11 percent. However, despite these grim prospects, Finance Minister K Peter Turnquest attempted to shift focus from the growth of unemployment to the 10,400 net jobs added to the economy as of November 2018 since the Minnis administration took office in 2017.

“Preliminary results from the most recent Labour Force Survey shows 2,305 net new jobs were added to the Bahamian economy between May and November 2018,” the minister said in a press statement. “While these gains are noteworthy, the rate of job growth is still not adequate to absorb the number of school leavers entering the labour market each year. This accounted for a small increase in the overall unemployment rate from 10.0 percent to 10.7 percent in May of 2018.

He further noted improvement to the labour force in Grand Bahama and Abaco.

“Overall, we welcome news that the unemployment rate improved in Grand Bahama and Abaco, two of the largest population centres outside of New Providence. The numbers of discouraged workers also decreased, pointing to greater confidence in economic prospects among job seekers. But, our target is a level of growth that will reduce unemployment in a sustained way, and will be felt evenly across the country, so the work must continue and intensify.”

He said: “What a sad tale the labour statistics released and reported today tells. The fact is unemployment is worse. Things are moving in the wrong direction. Yet despite the signs and warnings the government continues to double down in their depressing menu of stop, review, cancel and cut back. The rot has set in and we urge the government to reverse course before they inflict more suffering on the Bahamian people.”

According to both officials, two of the three most populated islands that were surveyed experienced decreases in their unemployment rates while one experienced an increase.

“At the time of the survey, the rate in Grand Bahama was 11.9 percent and in Abaco 7.7 percent. On the other hand, New Providence’s unemployment rate increased from 10.1 percent in May to 11.0 percent.”

Employment gains were driven by private sector employees, which increased by 3.8 percent to 135,135 persons when compared with May. Additionally, the number of self-employed persons stood at 32,475, an increase of 11.9 percent since May.

Demographically, there were fewer women employed when compared with men. Mrs Winters revealed that another study now being completed by officials showed that despite women having more credentials than their male counterparts, more of them remain without jobs.

She also said: “Overall, the unemployment rate for women reached 11.3 percent in November, compared with 10.0 percent for men. Young women, those aged 15-24 and core-aged women, those aged 25 to 54, were more likely to be unemployed than their male counterparts.

“By contrast, men aged 55 years and over were slightly more likely to be unemployed when compared with women in their same age cohort.”

These findings, according to officials, seem to fall in line with youth unemployment in the Caribbean.

The number of discouraged workers also fell by 6.7 percent in the six months to November, Mrs Winters said.

Discouraged workers, according to the standard definition of the International Labour Organisation (ILO) are people without work and available for work, yet were not actively seeking work because they are not hopeful about their prospects of finding employment.

Ok Fred , how would you solve it ? 1. Give jobs to friends and political cronies ,in the G overnment where no real work existed. 2. Borrow more money and start fruitless projects like the worlds most expensive pile of curry in Central Eleuthera. .3 Borrow the money and spend it on travelling the world pretending to drum up investment.

I reckon all three.

Lowering unemployment means sound national economic planning and providing incentives for the private sector ........ some ground work has been laid.

Have to wean our people off seeking Government jobs ..... need to cut public sector by at least 25% now.

Yes or no - it's obvious 91,409 well intentions comrades rightly voting out PLP but now wish they had had been presented with another option to have allowed them 'halted' voting for the 35 red shirts candidates which over each 622 days since Minnis, KP and whats that other crown minister's name - Dion - tooks power - been witness how the red shirts have endured the people to much difficult times whilst reds keep screwing up with much failure adjusting they 'new role' as the colony of out islands from opposition to governing party. Yes, no - the reds are finding out that governing is indeed a difficult job, and what are voters to do come 2022 general elections?

For starters get rid of unnecessary white and blue collar expat workers and secondly, stop handing out work permits like candy.

... the easiest and fastest solution!

Exactly. Whoever came up with this CEB Bill...my goodness. It's just a carte Blanche to IT mom and pop shops who will make a one time payment to the government, take funds from local companies and transfer the money straight out the economy. It's the EXACT same economy shrinking model as the webshops. They're not going to hire Bahamians or train Bahamians in any meaningful way. And the government has made it legal for them to do do. Now they want to go into the WTO so more companies can do the same.

expat workers are not the problem, it's that -d education average and the useless degree's handed out the the College of Bahamas

Yes or no ma comrade K4C, I agree in the main, Expats are not the problem. Our schools should dedicate 4 hours daily classroom time to teaching the Trades, Art, Music, Drama, Poetry with other 2 hours instructing in Math, English, etc. Yes, no just take looks at Minnis, KP, Jeff and Carl Wilshire - all spent far too much time classroom but still functional Fuc#ups?

Spoken like an expat! I don't give a dam if they have an -F average.

If Bahamians had those jobs held by expats we wouldn't have an unemployment problem, crime would drastically decrease, the local economy would immediately return to buoyancy, business would flourish creating more job opportunities, the government would collect more taxes, infrastructure & medical would greatly improve and foreign reserves would drastically increase!

Alternatively, keep the expats' and watch the country continue going down the tube.

It's a no brainer equation regardless of how you look at it.

What part does runaway immigration play in these unemployment figures? We do educate HUNDREDS of children of immigrants. I also wonder how many undocumented immigrants there are wandering around looking for work. Should these issues not be mentioned or are we becoming too attuned to political correctness?

Shouldn't you be Between the Yes that follows the No and not the other way round? My God man, can't you ever get it right??!! LMAO

We need rapid growth of small to medium sized businesses, but sadly with increased taxes, the need for a large capital investment up front, high labor and electricity costs and WTO their presence will shrink rather than grow. In other words, I expect unemployment to increase, right up until the next election that is!