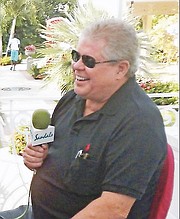 A RETIRED boat captain yesterday claimed he did not see the small vessel a 73-year-old man and two others were on when the yacht he was skippering, said to be owned by Sandals Resorts founder Gordon “Butch” Stewart, ran them over killing the elderly man four years ago.

Neville Sylvester Christie, Mr Stewart’s boat captain for 33 years, told the court he saw nothing in his path before the 90-foot Sir John II rammed into the 15-foot boat Timothy Ferguson was on board on April 3, 2015, causing the elderly man to suffer severe propeller wounds that ultimately led to his death.

This came despite his claims that from his vantage point on the yacht’s sky bridge, he could see “clearly” as far as a mile out to sea, and that it was “very sunny and bright” on that day and visibility was “very good”.

Nonetheless, Mr Christie maintained that one of the two other passengers who were on the boat with Mr Ferguson told him they didn’t see the yacht coming, something he said “surprised” him at the time. However, Mr Christie claimed that when he asked a second time if they saw the yacht coming, one of the pair said they were waving their arms to get his attention, something he denied seeing.

The testimony came during an inquest before Coroner Jeanine Weech-Gomez to determine liability for the accident.

According to the evidence led, on the date in question Ferguson and two others were on board a 15-foot sailing vessel in waters approximately two and a half miles offshore from Sandyport, New Providence, when they jumped out of the boat to avoid being hit by a yacht that was on a collision course with their vessel.

Ferguson’s body was found floating in the water a short time later with severe injuries and bleeding. The elderly man was removed from the water and put on board the yacht. He was later pronounced dead in hospital.

According to Dr Kiko Bridgewater, a forensic pathologist, Ferguson died from multiple blunt and sharp force injuries to his lower extremities, namely the right groin and proximal left upper leg, with a near amputation of his right lower limb near the area of the groin. He said the injuries appeared consistent with propeller wounds.

Dr Bridgewater said while Ferguson did not suffer any injuries that would have killed him instantly, the man would have probably lasted “seconds to minutes”, and no more than three minutes due to the severity of his wounds, which featured severed blood vessels and broken bones.

Dr Bridgewater also said that he would not expect anyone in Ferguson’s position at the time to last any longer than 10 minutes maximum.

Dr Bridgewater further stated that applying a tourniquet to minimise blood loss would not have helped much either, given that some of Ferguson’s organs were protruding from his lower abdomen due to the size of one of his wounds, which were some 11.5 inches long and 5.5 inches deep.

Mr Christie, testifying by video link, claimed that on the day in question, he was on a boat in Old Fort Bay with a crew member, Ian Reid, preparing to go out to sea. They were waiting for passengers, one of whom was Mr Stewart, who came to the boat around 7.30am. Mr Christie said he lived in Nassau at the time.

Mr Christie said the yacht disembarked at a quarter to eight, leaving Old Fort Bay and heading in a western direction to go fishing.

He said they were trolling for some four hours, before deciding to head east because they didn’t catch anything. Just before they got to the Discovery Island area, Mr Christie said he heard a commotion in the cockpit.

He said when he spun around, he saw a small boat in the water with two people on board. Mr Christie said he remarked “Jesus” in dismay before turning the yacht around and heading back towards them. Mr Christie said when he got close enough, he jumped into the water, collected the injured Ferguson, and swam back with him towards the yacht, where his crew helped him lift the man on board.

Afterwards, Mr Christie said he asked for some towels, which he used to cover Ferguson’s body.

Mr Christie said at that time, Ferguson was still breathing, but his injuries were severe and beyond treatable by first aid methods. Thus, he said, he notified both the Royal Bahamas Defence Force and the Royal Bahamas Police Force for assistance, stressing that they get there as quickly as possible.

Mr Christie said it took roughly 30 minutes for the agencies to respond. However, Mr Christie said when they arrived, the seas were too rough for their vessel to pull up alongside the yacht. According to Mr Christie, the waves were between five to seven feet high with the wind blowing at 20 to 25 knots.

As a result, Mr Christie said the officers instructed him to follow them back to the RBPF Marine Division base near Prince George dock, which he did. Once there, he said police and RBDF officers boarded Sir John II and questioned him about the incident. He said he gave them the information, after which they instructed him to go to the police station where they took a statement.

Afterwards, Mr Christie said the officers told him he could go home, which he did.

Ramona Farquharson-Seymour, the attorney for the family of the deceased, questioned Mr Christie on his testimony, particularly his claims that he did not see the small boat nor any of its passengers waving at him and the yacht, despite his claims that he could see up to a mile out to sea from where he was located on the vessel.

She also questioned why, in his statement to police, he had not included in his claim that the younger passenger of the small boat had told him that he had not seen the yacht coming. To that, Mr Christie said he was “shaken up” at the time, as nothing like that had ever happened to him before in his 40 years as a boat captain. However, he said, he gave the information to the best of his knowledge.

Mr Christie also denied Mrs Farquharson-Seymour’s suggestion that upon rescuing the other two passengers of the small boat, he apologised to them “profusely” for running them over. Mr Christie said the first thing he did was ask them whether they saw the yacht headed in their direction.

Elaine Ferguson-Lightfoot, Ferguson’s daughter, said the last time she saw her father alive was the day before the incident in question, when he took her to the airport. She said the next time she saw him was when she had to identify him in the morgue on April 7, 2015.

“…I left him a whole man, came back and met him a chopped up man,” she said.

A 90-foot yacht under power should have keen eyes at its helm with an adequate number of trained crew to assist the captain in monitoring the location, speed and path of the yacht at all times. The all too obvious lapse of attention that must have occurred on board the moving yacht caused both the unfortunate collision with the much smaller stationary boat and the resulting gruesome loss of a man's life. It would be preposterous to suggest the occupants of the small boat were somehow responsible for getting in the way of the large moving yacht. It is interesting the yacht captain states he was heading east into the sun at the time of the incident. But such a yacht is fully equipped to deal with the effects of sun glare on visibility and the captain himself would have been wearing appropriate sun shades on a sunny clear day. Cased closed.