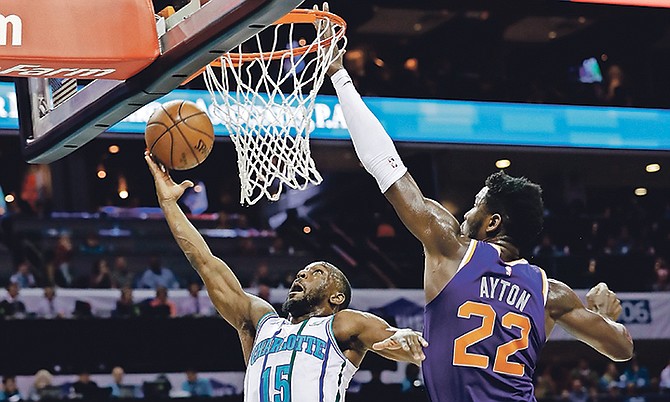 DEANDRE Ayton has missed the first games of his NBA career. He is now sidelined with an ankle injury and listed as “day to day” on the Phoenix Suns’ injury report.

Ayton missed the Suns’ last two games and the team is in the midst of a five-game losing streak and a Western Conference worst record of 11-38.

The No.1 overall pick in the 2018 NBA Draft rolled his ankle in a January 19 matchup against the Charlotte Hornets. In the first quarter, Ayton attempted to follow a missed layup but landed on the foot of teammate TJ Warren and sprained his left ankle.

The Suns host the Portland Trailblazers tonight at 9pm. Ayton is listed as “questionable.”

On the season, Ayton is averaging 16.4 points and 10.6 rebounds per game while shooting 59 per cent from the field.

One of the youngest teams in the NBA, the Suns’ struggles have been well publicised over the course of the season and frustration has mounted on several occasions.

Ayton is one of 12 Suns players aged 26 and the team has started three rookies. “Coach emphasises sacrifice, but teach us exactly what that means as young players,” Ayton said to AZcentral.com. “What do we have to give up, or offer up? Tell us our roles. That’s the main reason to know what to sacrifice.

“Explain it and we’ll know what our sacrifices are and whoever don’t do their job, confront them. Simple as that.”