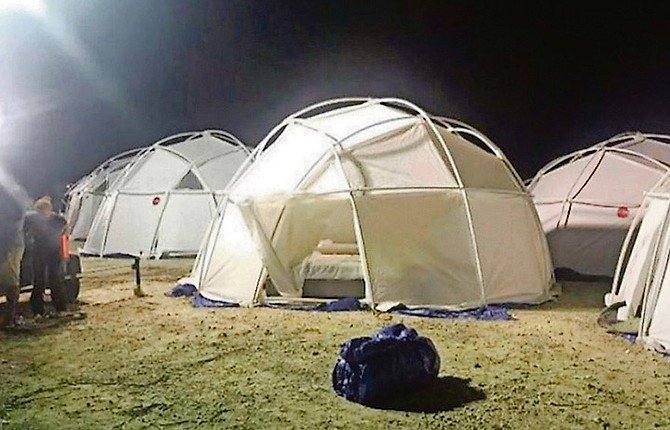 A NEW fundraiser for locals impacted by the failed Fyre Festival is seeking to raise $400,000.

Moved by the overwhelming outpouring of support for shafted restauranteur Maryann Rolle, the Exuma Foundation launched its GoFundMe campaign on Monday.

The foundation seeks to support community needs in Exuma, and states it will establish a "strict and fair process for distribution of funds to the local people who were financially affected."

The Exuma Foundation is a US public charity, and donations by US tax payers are deductible.

Its campaign read: "We at the Exuma Foundation were saddened by the unfortunate impacts the Fyre Festival had on the people of Exuma. The Netflix Fyre documentary gave a compelling insight into the story of how a community suffered devastating losses in the aftermath of the festival."

It continued: "To help our community and fill the need to get funds directly to Exuma, we have set up this account to benefit the victims of the Fyre Festival."

I’m gonna start a GoFundMe page for folks who post here on The Tribune website. . “Peoples is givin’ away money! We gots to get us some!”

None of this money will go to anyone. It will all be taken up by administrative fees

You assume too much and this article is trash. I don't know these people- never heard of the Foundation asking for a heap of money from strangers and somehow that is my fault? Why should I have to do research before reading a supposedly competent newspaper's article about an organization asking for a half a million dollars? Isn't it the business of the paper to inform? Especially in a situation where fraud has already been committed? This is one of the reasons why they have only gotten 7000+ in pledges. They won't get close to the 400G they are seeking if they are as defensive as you. If the requested information isn't readily available at ALL media points, people will be suspicious and not prone to give. And frankly the timing is suspect. They "just" remember to do this after seeing the restauranteur being taken care of? Two years after the fact? Where did that 400K number come from? It reeks of opportunism. Without a clear explanation as to how the unpaid workers will be named and the money distributed to them, I wouldn't give them a red cent. And only 7000K raised so far tells me I am not alone. But heh- I hope the foundation members are willing to reach deep into their own pockets. Good luck with the drive.

Moi? Defensive? Moi? Assuming too much? never, can not be true. No, no, no, not me, defensive? noooooo…….

Especially nowadays, everything should be looked at with a healthy dose of skepticism. But they have been in existence since 1998, and have Boards of Directors in the US, Canada and in the Bahamas. You may not have heard of them before (neither did I) but it doesn't make them Johnnycomelately.

Greentea - What an ignorant and insulting rant. The Exuma Foundation has been helping the people of Exuma for 20 years providing education for children with special needs, repairing and building housing for struggling individuals and hosting various outreach services to name just a few activities. Try to engage brain before flapping gums, bey! It's embarrassing.

None of this, including the first Go Fund Me will end well. Business=risk, whether calculated or foolish.

Greentea - Quite well written but very ignorant of the facts concerning the Exuma Foundation which has been helping the people of Exuma for decades. They help children with special needs, provide housing and repairs for struggling individuals and host many outreach services. I I know because I helped out there for years. Try to engage brain before flapping gums, bey!!