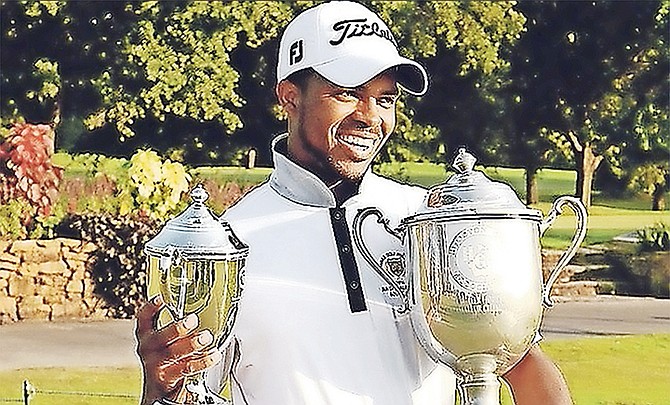 DEVAUGHN Robinson represented the Bahamas for the fourth time among the region’s elite golfers at the Latin America Amateur Golf Championships. (File photo)

DEVAUGHN Robinson once again represented the Bahamas among the region’s elite golfers at the Latin America Amateur Golf Championships.

He finished tied for 29th in his fourth appearance at the event, hosted this year at the Teeth of the Dog Golf Course at Casa de Campo in the Dominican Republic.

Robinson finished at +3 (291) through four rounds. He shot an opening round 76 where he recovered from a slow start with three bogeys and a double bogey on the front nine to birdie holes 12 and 18. Round two was his best of the tournament when he shot a 69 and birdied five holes with just two bogeys.

Mexico’s Alvaro Ortiz clinched the LAAC with a 14-under-par total of 274, two shots ahead of Luis Gagne of Costa Rica, who matched his closing round of 6-under-par 66.

The 2019 field included 108 players. Invitations for the championship are sent to the leading players from the 29 IOC-recognised countries and territories from this region that are current members of the International Golf Federation. Each country is automatically provided with two positions, which are to be filled by their best-ranked players from the World Amateur Golf Ranking.

Richard Gibson Jr and Paul Tsavoussis represented the Bahamas in 2018.

In 2014, the Masters Tournament, The R&A and the USGA announced the formation of the LAAC in an effort to further develop amateur golf throughout the region, and specifically in South America, Central America, Mexico and the Caribbean. The LAAC follows a model established by the Masters and The R&A when, in 2009, the organisations created the Asia-Pacific Amateur Championship (AAC) for the purpose of advancing the sport in that part of the world.