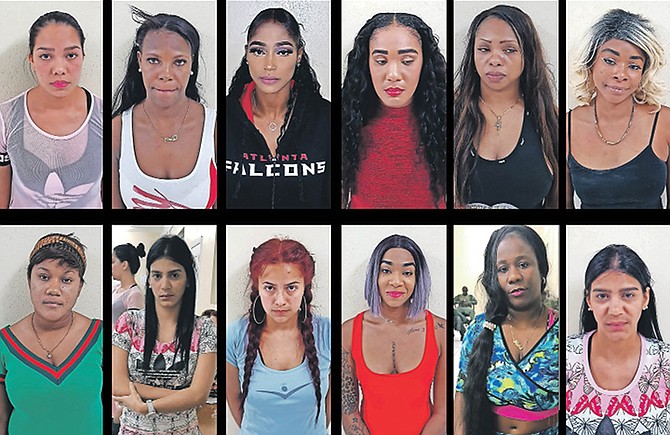 The immigration enforcement team raided three strip clubs between midnight and 3am.

While the women are expected to be charged before a Magistrate’s Court in the coming days for infringing statute laws, it is unclear what charges they will face.

An official from the RBPF said it is likely they will face charges for immigration offences.

“The operation’s objective was to infiltrate the illicit nightlife circuit in New Providence by strategically targeting strip clubs throughout the island,” immigration officials said in a press statement released yesterday.

“In particular, the aforementioned arrests were made at the Xclusive Sporting Lounge (Faith Avenue North), New Twilight Restaurant and Sporting Lounge (Robinson Road) and Cheetahs Upscale Bikini Sporting Lounge (East Bay Street) and the foreign nationals were transported to the Detention Centre, Carmichael Road for processing.”

The RBPF’s Southwest Division was led by Police Sargent 2581 Kerr and PC 3555 Simmons.

This is the latest immigration arrest in recent weeks, as officials all over the country crack down on illegal migration.

Last Thursday, 62 Haitians were repatriated from Freeport, Grand Bahama to Port-au-Prince, Haiti, on board a Bahamasair charter flight under heavy escort by law enforcement officers.

According to the Department of Immigration, 33 of the migrants were arrested in New Providence for various immigration offences and 29 were apprehended in Grand Bahama. Twenty-five of the Grand Bahama group were arraigned last week in the Freeport Magistrate’s Court. The group was repatriated after 8am.

Earlier this month, Prime Minister Dr Hubert Minnis said the government remains committed to aggressively dealing with the country’s immigration problems, which, he said, poses a serious threat to major sectors of society.

The prime minister said he is aware there were many Bahamians who feel not much has been done to stop illegal immigrants, but he insisted that “a lot” has been accomplished.

But the men who employed these strippers remain free to set up shop again. Why? Because they are protected by certain senior police officers who are handsomely paid to provide them with protection. LMAO

That and the Government just doesn't know how to GOVERN!

Obviously there is a market to look at nasty!!

WHEN ARE WE GOING TO "TARGET" THE BOSSES THEM??

Seriously, are we going down this road again?Seriously? Wow, I cant believe this! Okay, let's see what will happen. Okay, people are arrested now, in a few months, next year, and the years after. Does this sound familiar ? Wow, unbelievable! I guess it will be legal just like the " Numbers People"! Same trend!

Why shane the women and not the employer? Tribune I'm ashamed of you.

Oh right. that's how we roll in this country. Arrest and deport the illegal immigrants but dont touch the people paying them

THE TRIBUNE IS ABSOLUTELY WRONG TO PRINT THE FACES OF THESE WOMEN WITH BROKEN LIVES IN ITS NEWSPAPER.

But what goes around, comes around.

The entire staff at the Tribune newspaper ought to be ashamed and hang down their heads in light of the decision to print the faces and names of these women.

THIS WAS A BAD DECISION - WORST THAN THE SIN FOR WHICH YOU WISH TO STONE THESE WOMEN FOR.

Pride comes before the fall; and surely, this will trigger the beginning of the Tribune's fall!!!

I once praised the name of Sir Etienne Dupuch but now I feel a sense of disdain for this establishment. The Tribune has conducted itself very disgraceful in this hateful act.

THE NEWS EDITOR HAS FALLEN FAR BELOW THE STANDARD OF DECENCY.

To Godson: YOU ARE 100% CORRECT. THE TRIBUNE HAS BECOME NOTHING BUT A RAG TAG TRASH LOADED TABLOID WITH ZERO JOURNALISTIC PROFESSIONALISM, INTEGRITY AND ETHICS. MOST OF US NOW ONLY READ IT TO GET A GOOD DOSAGE OF LAUGHTER TO START THE DAY....I GET MORE REAL NEWS READING THE PUNCH. LMAO

I have always disagreed with the media showing the faces of individuals who are simply arrested regardless of the purported crime. Even worst there is rarely ever a follow-up story to ascertain whether the individual was found guilty or not. With regard to this particular case, trafficking in women is a major problem world wide. Who is there to say whether one of these women is a trafficking victim.

...or, who knows what social-economic situation these women have had to endure in their lives before resorting to the questioned conduct in order to earn a living. We are not taking the time out to reflect and examine ourselves so as to be able to have some empathy with those less fortunate. But he who feels it, knows it.

... BUT CONSIDER THE SOCIOECONOMIC SITUATIONS SOME WOMEN HAVE ENDURED WITHOUT RESORTING TO THE SAME LIFESTYLE.

ALL choices have consequences, some good, some bad, but surely adults understand this concept!

There will be no attempt to arrest or prosecute the owners of these clubs.I have heard about similar situations like this in the past.

I am so very glad to know there is no real crime going on in this country that the police havs nothing better to do than hang out at strip clubs. Excellent news. I heard crime was way down, but didnt realize it was zero. Cool.

why not arrest the people who own the establishments? Are they not employing with out permits? WTF this country is just backwards.

These young ladies had only just finished very successful engagements at Police Headquarters, the defense force HQ at coral harbour and to sold out performances at PLP headquarters. If you wish to view them they are now appearing nightly at the detention centre. Enjoy!!