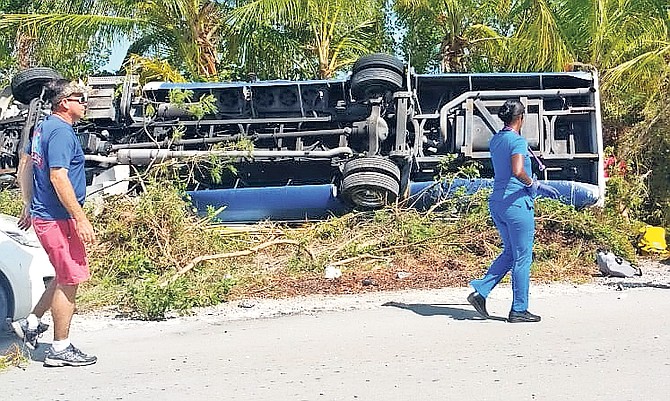 A passenger on the tourist bus that crashed at Rock Sound, Eleuthera, last week has spoken of how he helped survivors in the immediate minutes after the crash.

American Nick Dale is a nursing student at Jacksonville University. He said he and his buddy, Chase Hollingsworth, jumped into action to help passengers.

“It was quite a chaotic and kind of a scary event,” said Dale.

When the ship arrived at Eleuthera Dale and his friend signed up for a day-long cave excursion which involved taking a tour bus.

"It was literally just kind of a spontaneous summer trip,” Dale said.

“I was looking out the window one second, next thing I know, a tree branch is hitting the bus, and we're spinning sideways,” Dale said.

“There were a lot of people who were injured, and the first thing you think about is, ‘Am I OK? Are the people I'm with OK?’ And then I immediately started to react and look for other people, (to) see if they were all OK.”

Nursing students, both men, starting triaging people and getting them away from the bus.

“There were lots of lacerations, so lots of blood. There's a couple people that were pinned inside the bus,” Dale said.

Dale said an 18-year-old college student was stuck under the bus.

“Since he was trapped, he was pinned, they really had to worry about if they moved the bus or if they moved him, if he would have any internal injuries that would suddenly cause him to become very critical,” Dale said. “I did my best to try to stay with him, mainly because when you're trapped in a situation like that, I just kept thinking what I would have wanted someone to do for me.”

Dale did get an update that the young man is out of surgery, awake and alert.

The two worked alone for about 20 minutes before being joined by nurses headed to work and paramedics.

Injuries for four people were so severe, that they were flown to the US for treatment.

A total of 28 others were treated at local hospitals.

No other vehicles were involved in the crash, which remains under investigation.

Dale said he was just doing what anyone would do.

“When you're in a situation like that, it shows the best of humanity,” Dale said. “I think that the people that responded, responded as best as they could.”

Carnival has suspended all operations by the tour operator and they're helping affected guests and their families.