DIANE PHILLIPS: How a British war hero and a young Bahamian woman proved that love really can conquer all

On June 17, three generations of a low-profile Bahamian family boarded flights to a remote town in Wales where the man who was their father and ancestor would receive one of the highest honours ever accorded.

For the first time in more than half a century, a jet would be named after an individual. His name – Captain Lionel Rees VC, honouree of a Victoria Cross, the most coveted, prestigious and highest bravery award in the British honours system.

Pomp and circumstance including blessings by the mayor, an historical exhibit for visitors and schoolchildren and a flyover would mark the aircraft naming ceremony where the three generations of Bahamians would be the guests of honour. 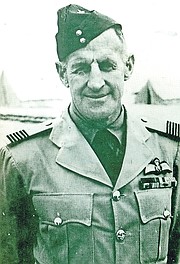 The jet would be called the Group Captain Lionel Rees VC in recognition of the man who more than 100 years earlier on July 1, 1916, at the height of battle in WWI, though shot in the thigh, single-handedly took down 10 enemy aircraft. His skill and courage saved untold numbers of his own company and innocent men, women and children on the ground. Years later, Captain Rees VC returned to serve in WWII.

This is the story of Captain Rees, legendary airman, war hero and a man who, having achieved the highest honours and served as military advisor to King George, sailed to The Bahamas, fell in love with a young Bahamian woman and because he wed her, faced the most heroic of all his battles – against the white oligarchy who rose up in horror at the thought of a recognised aviation pioneer and icon who trod on tradition and wed a black Bahamian he first met as his maid.

Olvin Rees remembers his mother better than his famous father. She was strong, he said, and disciplined, a fanatic about keeping a proper home and ensuring that her three children grew up appreciating the value of hard work.

He also remembers the pain she endured, putting on a good front, head held high, holding jobs as a domestic in Lyford Cay after his father died. It wasn’t until recently that the younger Rees fully understood the agony she quietly suffered or realised the full extent of his father’s bravery.

The elder Rees was born in Caernarfon, Wales, in 1884. As a child he was restless and endlessly curious. His fascination with things that fly started early. He was once given a camera and decided to attach it to a kite to try to take what we know today as an aerial photo. It flopped and he lost the camera but not his interest in what goes aloft. He attended a prep school, then Eastbourne College in Sussex, England, excelling in math and sports. He made it into the Royal Military Academy without showing a lot of promise – admitted 62nd out of 80 students. But by the time he left there was almost no one who could touch his grades nor his talent in athletics and his skill in the field.

Posted to West Africa, he felt at home with the locals and developed an admiration for - and connection with - tribesmen who managed to live simply in the heat of the tropics. It was a respect that would serve him well later in life. An officer in the regular army when WWI broke out, he transferred to the Royal Flying Corps and two years later after being shot himself ignored the bullet in his leg, bravely fighting off up to 10 enemy aircraft to become the most decorated man in the British military.

But it is the human side of Captain Lionel Rees VC and the legacy and family he left behind that makes his story and that of the second and third generation of Rees’ so heart-wrenching, endearing and compelling.

It is an important part of Bahamian history overlooked in classrooms and rarely mentioned in public conversation.

The story begins after the end of the war to end all wars. Captain Lionel Rees VC had enough of artillery and the sound of gunfire. A loner by nature, he took up sailing, setting off from the UK planning to head to New York, but the prevailing winds carried him far south of his intended destination and quite by accident, Rees became the first person to sail the Atlantic to the Caribbean singlehanded.

Once in the region, he sailed through The Bahamas, exploring islands (declaring then that fish and crawfish were easy to find), before heading further south as far as South America, but something kept drawing him back to The Bahamas.

In Andros, the man once called “the bravest man in the world” decided it was time to put down roots. 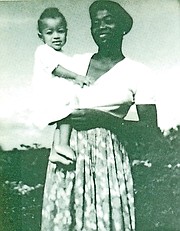 He was 61, tall, lanky, talented, erudite and decorated, a friend of British royalty – a prime catch for any of the women who had met him previously during his stops in Nassau. Instead, he found in a woman he first hired to help him in his new home-type life a partner who would be as strong and resilient as he.

She was 18-years-old, beautiful and black. And high society in Nassau went wild. “They weren’t alone,” says son, Olvin, now 65. “When she got pregnant, my grandfather wanted to kill her.”

Neither the Captain nor his new bride, the former Sylvia Williams, paid any heed to what high society said. There would be two more pregnancies, a total of three children, two boys and a girl.

If Nassau’s upper crust curled its upper lip, Andros was the opposite. There, the man who could build or fix anything was welcome as one of them. “We lived on a hill in Mangrove Cay and had the first house to have electricity,” recalls Olvin Rees. “I remember the windmill and we had solar energy as well from that time. We had these big tanks on stilts painted black to store and heat water providing a gravity feed through the house.”

Men would look to Rees to help them fix something on their boats or anything that had an engine. He was as clever with his hands as he was with the tools of his mind and continued to write scholarly articles, historic treatise pamphlets and one particularly controversial piece on the parting of the Red Sea. In Andros, with sufficient supplies of fresh water, life was good. Olvin Rees, a serial entrepreneur, and long-time chairman of Bahamas National Pride, says only hatred and mistreatment, particularly of his mother, spoiled what would have been an idyllic early childhood.

“A lot of things were denied him – more honours, Queen’s honours, titles, invitations, perhaps a knighthood,” says Olvin. “Here was a man who had been around the world, had so many adventures, who would have dreamed he would end up in Mangrove Cay?”

Olvin’s childhood memories are filled with thoughts of running down a hill, chasing after his parents to climb aboard the boat and go fishing, until his father’s health began to fail. The journey toward death was long and hard. The same rejection that spewed hatred at the thought of a highly decorated aviation hero marrying a black Bahamian less than half his age met them at the entrance to the hospital.

According to Tribune publisher Eileen Carron, who was a junior reporter on her father’s paper in the early to mid-1950s, the Dupuch family had to intervene. “She was his wife, the mother of his children and they would not let her visit him in the hospital just because she was black and they disapproved of the marriage,” Mrs Carron recalls vividly. “We had to intervene and plead with them. Finally, she was allowed in to see him.”

After her husband’s death in 1955, Mrs Rees suffered greater indignities. According to one source who asked not to be named, the white oligarchy from Nassau stormed the house in Mangrove Cay and took what they felt she had no business having, including his decorations and honours. They stole everything of value, he says. The children were left with nothing, the offspring of a man his biographer would later call “the most interesting character ever to be awarded the Victoria Cross.”

A pastor from a Nassau church who had been entrusted with funds by Captain Rees pursed them out as he felt he could when the need was great, sometimes accompanied by an apology. For 40 years, Mrs Rees continued to fight the system, working as a domestic and trying to collect the pension to which she was entitled and finally received. In Lyford Cay, employers did not want to let her go. They respected her work ethic and the strong ground she stood. Eventually, through hard work and perseverance, she bought a little house. Sylvia Rees died in 1995 at the age of 66. She had been accepted at last and her funeral was attended by hundreds. She had not lived long enough to see the jet being named after her husband.

All three of the children, two light-skinned and Olvin who is dark, share a powerful respect for their mother. During the trip to Wales where they and their children and grandchildren were treated as royalty, they reunited over a love story for the ages with its duality as in most love stories. Its angst, its joy, its tears and its triumphs.

“We had three generations of our family attending the RAF event, travelling from The Bahamas and USA and were all extremely honoured and excited that my father was being recognised in this way,” said,” said Olvin, speaking for the family. “

If the world marks the manner of Captain Lionel Rees VC and an RAF plane is the first to carry an individual’s name in more than 50 years, the Rees family is equally proud of their mother, a woman who never complained about the financial wounds and verbal knives she endured because she fell in love with an interesting man – maybe the most interesting ever to live in The Bahamas – and he with her.