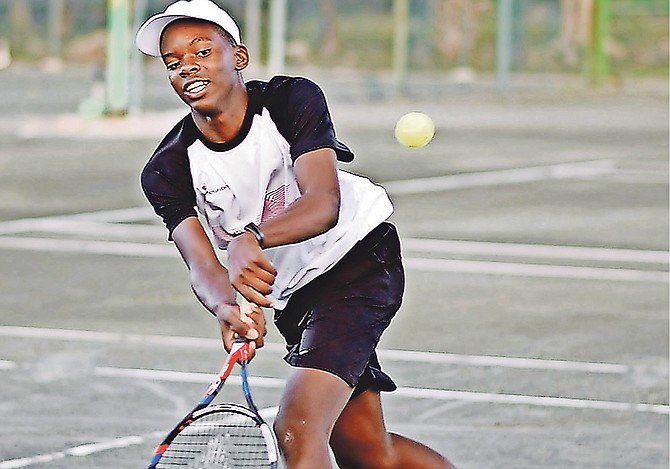 Top seed Alexander Bernard had one of the quickest matches played so far in the International Tennis Federation’s Junkanoo Bowl junior tennis tournament yesterday at the National Tennis Centre.

Also on day one of the week-long tournament, Bahamas Lawn Tennis Association’s top-seeded player Jacobi Bain had to endure one of the longest matches as he eventually advanced out of the first round as well.

Bain, ranked at No.7 in the boys’ under-18 singles, had to come back for a 3-6, 6-4 tie before American Evan Wen was forced to retire at the start of the third set because of the scorching heat.

“The match today was okay. The guy I played was pretty tough,” said 16-year-old Bain. “This is the first time that we played since we hit the ball as younger players around 12, but it was very unfortunate that he was unable to continue because of the heat.”

From the first game of the first set, it appeared that Wen was playing at his best. He took longer breaks than usual after each point and at times stretched out on the bench in between points.

A few times he had to get some medical assistance from Sasha Ferguson. And, at the end of the second set, Ferguson and ITF referee Mickey Williams went back on the court and finally made the call to stop the match. “He came straight off the practice court onto the match court and he was breathing heavily from the first set,” Bain recalled. “But it was obvious that he was not himself and after he got a break and went on to take the first set, I had to regain my composure and come back in the second set.

“But the heat was hot and boiling. I’m just glad that I got through it.”

After getting a break to go up 2-0 in the first set, Wen found enough energy to break for a 2-2 tie after Ferguson checked him out to make sure he was alright. Wen slowly went on to break at 5-3 and held for the first set.

In the second set, both players held serve to a 4-4 tie before Bain finally got a break and he held serve to pull off a 6-4 win to level the score at 1-1 and force the third and deciding set.

However, Wen was unable to continue as southpaw Bain advanced to the second round.

“I’m at home, so I just want to continue to play well before the crowd,” Bain said of his next match, scheduled for Wednesday.

Not far from his hometown of Naples, Florida, Bernard made it look so much easier as he prevailed with a dominating 6-0, 6-0 whitewashing of Mexico’s Sebastian Gonzalez.

“I was just trying to take the ball on the rise and keep it away from the guy,” said Bernard, another southpaw. “He was a lot taller, but a little bit slower so I was trying to make him around the court.

“He was struggling and making some mistakes, so I capitalised on that.”

Bain, who missed out of participating last week in the BLTA’s Junior Nationals, sponsored by the Byron Ferguson Foundation, was the only Bahamian male player in action yesterday to win.

Michael Major Jr, the Jr Nationals’ under-14 champion and under-16 runner-up, got in some experience, losing 6-0, 6-0 to Ekansh Kumar from the United States.

Bernard, 15, said he just has to improve on his first serve percentage, which was really low in his first match ever played in the Bahamas and hopefully if he can come more to the net on his rallies, he should have a very successful tournament.

“It feels good to be here,” said Bernard, who lost in the first round of his last tournament at the J4 Plantation in Florida in May. “You really don’t know what to expect in the earlier rounds, but I feel confident and I’m ready to go.”

On the girls’ side, a number of Bahamian players were in action, but Peyton Anderson, the Jr Nationals’ under-16s singles champion, was the one to win, albeit against a local rival in Parjae Major, 6-4, 6-4.

“I think I played very well today. I tried to get in some volleys to make her play,” said Macavei, a southpaw as well from Cincinnati, Ohio. “I was happy with the way I played.”

Macavei said if there’s anything that strikes out in her initial trip here is the beaches. But she admitted that she would love to visit Exuma and to swim with the pigs. However, she said she has some unfinished business on the tennis court to deal with.

The 15-year-old Macavei is coming off a round of 16 appearance in her last tournament in Noord, Aruba, last week.

As for Pal, who hasn’t played since she lost in the qualifying round of the J4 Plantation in Florida in May, the tournament so far was all that she expected and more.

“It was very hot, but I think I played very well,” said the resident of West Palm Beach, Florida. “I tried not to pass out. Maybe I could have moved a little better, but I played my best.”

This is Pal’s first trip to the Bahamas and the 16-year-old is just thrilled by the hospitality of the Bahamian people.

“It’s so different from Florida. Everyone is so nice. I was so surprised at how everyone was just so welcoming,” she said. “The weather was so hot, but at least it didn’t rain. I love the beaches here.”

Today, Jr Nationals’ boys under-16 and under-18 champion Denali Nottage will take on Kaj Quirijns from Switzerland, while Donte Armbrister, fresh off his Davis Cup debut, will face No.5 seed Victor Lilov of the United States.

Sydney Clarke, the Jr Nationals’ under-18 champion, will not play her first match until Wednesday when she takes on Mary Jean Brumfield. While Clarke got a bye, the American won 6-0, 6-4 over Tangla Riley-Codrington of Barbados.

Results of other matches played yesterday were as follows: