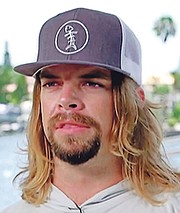 Jonathan Hernandez, the victim, told NBC reporters he blames shark-feeding for his attack.

“They’re associating humans with getting food, and it’s making it very dangerous to be in the water, whether you’re spearing or you just happen to be snorkeling near where they’re feeding them,” he said.

Mr Hernandez said he is a professional boat captain, fisherman and an experienced diver who was spearfishing with friends off Abaco when he was attacked.

“I got hit so hard from behind I thought the boat had run me over,” he said. “I immediately looked to the left side and the shark was right in my face.”

He was bitten on his left calf but successfully swam to safety.

“I was able to get away, kicking away,’’ he said. “I looked in the water, and I could see in the water that my calf was hanging and gushing blood into the water.

“It all happened so fast it was kind of a blur of whitewater and fins and thrashing.”

Mr Hernandez’s friends quickly made a tourniquet for his calf out of weight belts used for diving.

“The fact that the tourniquet went on between 60 and 90 seconds of the actual attack was probably the single biggest factor and why I’m sitting here talking to you today,’’ he said. He told NBC it will be six weeks before he can begin physical therapy on his “shredded” left calf.

Meanwhile, the family of Jordan Lindsey, the 21-year-old killed after a shark attack last week, has raised $71,354 on GoFundMe to take care of expenses resulting from her death. She was attacked by sharks while snorkeling off the coast of Rose Island. Her right arm was ripped off and the sharks bit her other arm and both legs, among other areas.

Dr Erich Ritter, a shark expert, told the Associated Press the behaviour of sharks in her death incident was abnormal. He said it may have been triggered by nearby chum dumping and added that the snorkeling company should have monitored the area better. It remains unclear which snorkeling company Lindsey was involved with. However, The Tribune understands the government has received reports about chum dumping in the area of the incident, a matter that will be examined as part of the overall investigation into Lindsey’s death.

The Bahamas has traditionally averaged several shark attacks per year. Lindsey’s death was the first confirmed shark-related death since 2008.

Are you telling me that people " Chum" the water. I guess its like the numbers racket. People actually bought numbers for years before anyone did anything about it. I guess we bahamians didn't know about it.

These are two COMPLETELY different scenarios that are being merged together to just sensationalize the shark issues. The tourist who died at Rose Island may very well have been a spin off victim to some extent of sharks being fed and attracted into certain areas. The Abaco attack was someone actively spearfishing. Anyone who has ever spearfished knows the inherent risks of the sharks, and barracuda's for that matter, and conducts themselves appropriately while in and under the water spearing your catch. Let's not jump the Abaco attack into the mix with the Rose Island attack.

Is this one of these captains on a cruise permit who exceeds the scope of those permits?

I guess this has nothing to do with the fact that he just speared a hog fish. It must be because people are feeding sharks.

This is such a ridiculous thing to suggest.

In the incident off of Rose Island it was right off Sandytoes, and although no one is talking about it, they dump food scraps off of the back dock, in the same are the lady was bitten. Sandytoes should disclose where there food scraps are disposed of, so that pleasure boaters are at least aware.

In this incident the person was spearing and had just speared a hog fish, that flap erratically.

If you are in the water without a stimulus, sharks won't bother you. If you go in the water in the are of fishing or food disposal you are putting yourself at risk.

This can very well be the product of an explosion of shark populations after a total ban on killing them in Bahamian waters!! Sharks can now roam the whole country at will with no culling. . .especially with our present practice of chumming for tourists!! Then there is the age old problem of spear fishing and sharks taking fish from divers or going into a frenzy and attacking the diver. . .their natural behavior when blood is in the water!!

Sharks are on the top of the food chain in our waters. . .they are now encroaching into out living/playing space. . .it was first theirs, now we occupy most of it. . .both were never in the same space without the shark getting eliminated and their numbers kept down!! Sighting a shark was rear. For example, after diving one year I saw one shark in the water and one swimming along the shore in Atwood Harbor on Chester Bay Ackilns!! Now they are being sighted all about in our harbors. . .one 16 foot Hammerhead was sighted in the cove at the rear of Arawak Cay!!

i think i saw one near the house of assembly, but i ran away before he could maim me,

Far too many sharks now. There needs to be a season on tigers, bulls, and reef sharks. Yes all the above is correct with chumming and spearing but it's gotten worse and will get worse until we handle lowering numbers.

Yes its sad this lady lost her life. This guy was spearfishing, shark bites go with the territory. To suggest we need a season for hunting sharks because there are too many suggests one of two things...either you’re incredibly stupid or you’re greedy and see a way to make money and fill your pockets by hunting or fishing for sharks. Shark-feeding has been done in the Bahamas for over 30 years. Over that time Hundreds of thousands of people have been swimming, snorkelling and scuba-diving within yards of those feeding areas, all with probably less than 10 bites and no deaths over that same 30 years. In that same time frame of 30 years we’ve had about 20 injuries and 2 deaths that I can recall, and one of those deaths was a “ shark researcher” doing something stupid for the cameras. Out of all the bites over those same 30 years probably all except 2 or 3 were people who were spearfishing or in the area of spearfishing.

I don't know why people who say the most incredibly dumb stuff are wont to call people stupid and other names in a heartbeat? You forgot that large group of persons consumed by sharks following the Haitian boat tragedy in Abaco. . .the Attol Island tragedy. . . cho cho cho cho cho cho cho. . .either yoon been in this Bahamas for them last 50 years and you lying about being here. . .yoon from around here dude. . .this is the shark eating people capital of the world!!

Chile we have lost 1000s from shark eating migrants after boats turn over for many years . . .more that 50 years Oyga! Hell, just a few years ago one man was out east fishing, caught a shark, cut it open and out popped a missing fisherman. . .all in three pieces!! That was no shark "tasting" Bahamian Fisherman. . .that was a sit down meal. . .Bahamian male stake!

Any Bahamian can tell you that we are now seeing sharks in areas where we have never seen them before and in numbers we have not seen before!! One expert in one US research University said that "three sharks ganging" a person one time is never heard about. . .this is a new phenomenon! Polar bears are culled. . .elephants are culled cho cho cho cho cho cho. . .is it sensible conversations Sir!!

Google for any animal conservation projects especially where man has encroach upon the habitat of endangered animals. . .especially dangerous territorial animals such as sharks in the sea. . .culling!! Reduction of a wild animal population by selective slaughter. This is not the wholesale killing of sharks. . .but the selective killing of the more dangerous type or those who get used to hanging around human habitats!!

You have zero proof that we have lost thousands killed by sharks...no proof at all. You just running your mouth and talking nonsense.

So oyga, you shot ya mouth off all over the place with no respect for that thing called evidence. . .WITHOUT A SCINTILLA OF RECORDED EVIDENCE . . .now when I gave you anecdotal evidences right back you want me to go find descriptive evidence for you? Are you fer real there ma bouy? What makes YOU sacerdotal there oyga? You gatta be outta ya mind. . .life don't work like that? That's how them little people do it in the school yard! I een on that run!

Remember what I said about people who tend to talk "things". . .being quick to call others names?

Stupid no. And I’m in no way greedy or in the fishing industry so appears you’re speaking out of typical ignorance. Do the math here genius, shark attacks send tourist away, bottom line. Sorta like your junglass way of approaching people.
Until the country is self sufficient, and can produce its own substainable way of life tourist and their money remain our backbone. 7 attacks this year in our waters. Since you are obviously not in the know several attacks have not been reported by spear fishermen from the US. Incredibly seasoned ones at that! And if you had a clue about keeping our ecosystem managed you would understand the need to have a season on certain species. Small minded rock dweller.

I worked in the tourism and watersports sector for over 20 years and I have more clue about the Bahamian ecosystem than youdo it would seem. Spear-fishermen get to deal with sharks, it goes with the territory. You wade in stirred up cloudy water at the surfline there is a chance you’ll have an unpleasant experience. Eat enough barracuda or amberjack or hogfish and good chance you’ll head to the hospital at some point. The Bahamas will never be self-sufficient, it will always need outside investment, be it tourists, hoteliers or other entrepreneurs....the country can’t survive without help from the outside. It’s too bad the girl died and this guy got bit...been happening for time immemorial and will continue. Our numbers for shark bites/deaths are among the smallest in the world, especially when you calculate all the numbers of people who enter Bahamian waters, both those who want no interaction with sharks and those who intentionally seek it.

Firstly, realistically the lady may also have simply been menstruating at the time, which could have attracted them to her. Secondly, no need to debate the gentleman's story!

There is not an over-population of sharks in the Bahamas!

We are definitely seeing more sharks in the shallower water near Hopetown, Abaco. There is no doubt about it, and they are BIG. Chumming is a deadly activity. (Rose Island and Abaco)