No Place For Corruption, Says Johnson As He Steps Into New Role 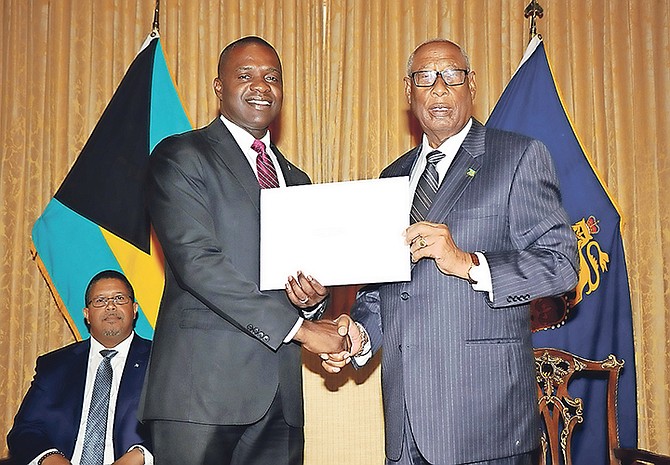 Elsworth Johnson was sworn in as minister of financial services, trade & industry and immigration by Governor General Cornelius A Smith. Photo: Letisha Henderson/BIS

NEWLY sworn in Minister of Financial Services, Trade and Industry and Immigration Elsworth Johnson yesterday suggested there will be "no place for corruption" as he committed the Immigration Department to upholding the rule of law and equality under the law.

Mr Johnson takes over the substantive role following the shock resignation of former minister and St Anne's MP Brent Symonette, who said he was in talks with Prime Minister Dr Hubert Minnis since November concerning his intention to resign before his 65th birthday.

Yesterday, Dr Minnis told ZNS News that he had informed Mr Johnson about the new post he was to take on about a week before the news was made public.

The portfolio represents 15 percent of direct GDP, as well as a significantly greater percentage of the country's overall economic contribution, according to Deputy Prime Minister Peter Turnquest, who also underscored his confidence in the Yamacraw MP.

"This is a tremendous responsibility for him, but we are very confident that he is capable and up to the task and we certainly congratulate him on this next step in his public career," Mr Turnquest said.

For his part, Mr Johnson pledged to continue the ongoing digitisation and reformation of the Immigration Department, and for his wider portfolio, he outlined widespread consultation with industry stakeholders as he settled into the new post.

"(In the area of financial services) I took the opportunity to have a brief conversation with some of the industry partners. We are at the cusp of the fourth industrial revolution and the intention is through partnership with the industry partners to build an industry that's comparable to the world," Mr Johnson said.

"In terms of immigration, we're dealing with human life. People emigrating to and from the Bahamas, the purpose there is to continue the work that was started by Mr Symonette to fully digitise the Immigration Department.

"I would like to commend those officers who have been working tirelessly to protect the borders of the Bahamas, but it goes further than that, we have to properly organise the Department of Immigration so we can provide reasonable, fair service to the persons who find themselves coming to that institution.

"So at this stage I'm partnering with all of the bodies that I'm working with to do so in the spirit of servitude mentorship and succession. Understanding that my stay on the stage in terms of life is not very long and so to create the capacity around me that there will be individuals, especially through young persons to sew them into the tapestry of the industry to take it on to higher heights."

Mr Johnson declined comment on allegations of corruption leveled against the department or the status of its anti-corruption unit on the sidelines of his swearing-in ceremony at Government House.

In its annual human trafficking report last month, the US State Department renewed concerns over reports of official involvement in protecting sex trafficking rings and corruption within the Immigration Department.

When asked how he planned to address the report, Mr Johnson underscored the country's sovereignty.

"We are a sovereign country," he said, "the Immigration Department is going to work together under the spirit of the rule of law and equality before the law to ensure that everybody is treated fairly, and treating people fairly means we are going to have to continue to create a system that responds in a timely manner and to continue to create a system that is fair and just for all. And so if we start to speak about fairness justice equality before the law and the rule of law - there is no place for corruption."

In a statement yesterday, Dr Minnis expressed pleasure over Mr Johnson's acceptance of the post.

"I am confident that Mr Johnson will work diligently to help to secure and promote our financial services sector," the statement read.

"He will also be responsible for helping to promote trade and industry as the government continues to secure greater Bahamian and international investments in our economy, including throughout the Family Islands.

"This includes support for small business development and greater Bahamian entrepreneurship in a variety of sectors.

"Mr Johnson will also be responsible for the ongoing reform of the Department of Immigration, including speedier processing of immigration applications and addressing the backlog of applications."