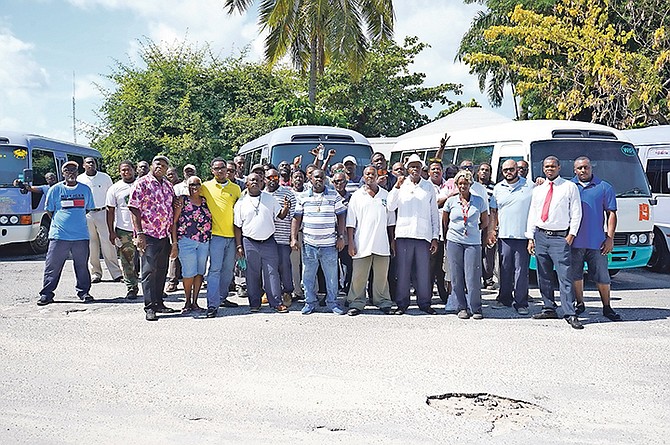 JITNEY drivers withdrew their services yesterday after government officials failed to meet with the Bahamas Unified Bus Drivers Union before their July 1 deadline. 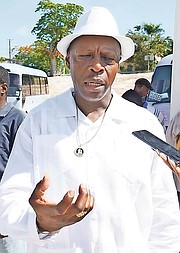 Frederick Farrington, BUBDU president, told The Tribune their demonstration yesterday was just "the tip of the iceberg and a full-fledged strike" may occur in the near future if their concerns aren't heard.

Mr Farrington said: "We put (our concerns) out there and said we would give the minister one month to meet with us (to discuss) our issues within the industry. It seems like the minister has pushed the union aside actually, it seems like he is not union friendly.

"The minister seems to focus a lot on the pilot project and is listening to paid consultants instead of sitting down with the union who are the actual voice and ears for the drivers.

"We (withdrew) services from each route - like 90 percent of buses," he said, which means about 80 to 90 bus drivers took part in the protest.

"We are going to (withdraw service) all day because we realise that the minister isn't in town, but this day has already been set for this withdrawal of service."

He added: "With this union once we put things in motion there is no turning back. We are going to give him the opportunity when he gets back in town to speak with us or else, we will set a next date and it'll be a full fledge strike."

Minister of Transport Renward Wells is currently out of the country on government business.

Meanwhile, the union president said he has addressed the lack of proper bus stops with Minister of Works Desmond Bannister and Mr Wells but claimed nothing has been done.

"Earlier this year in February we sat down with Minister Bannister in reference to the lack of bus stops in which the union had identified over 100 bus stops that were misplaced or damaged and never put back in place. (The minister) said fine, once we bring a proposal, they would see that those bus stops are in place," he said.

"We wrote the proposal and sent a copy to the controller of road traffic and we also sent one to the Ministry of Works. I sat down face to face with Mr Wells in reference to the bus stop issue and all parties agreed that they would resolve the issues but today they haven't avail."

Mr Taylor said: "It's important to be here today (to show) solidarity is number one and then of course we all have one common goal which is to try better the system. It's affecting everybody at least all of the drivers and because of this what we want to do is try and better the system.

Elliotte Williams, bus driver, said the sector has been neglected for many years and enough is enough.

Mr Williams said: "The bus drivers has had enough, and we are ready and as you see we are showing our togetherness and we will not back down, and we want answers. The bus stops are inadequate at this time and the road conditions right now put us at a disadvantage whereas the police ticket us at whim."

Gina Adderley, another bus driver, said the government needs to value workers in the sector as they "keep the island going."

She said: "The people will tell the government what happened today because so many buses (withdrew services) from different routes. We have to be one and the government has to hear us.

Mr Farrington said the union wants to discuss police officers ticketing bus drivers when there are inadequate bus stops, the repair or replacement of bus stops, a pay increase for bus drivers and the implementation of uniforms.

Please God let them strike before they kill someone!!

They've slowed down services???? Driving in Nassau must be pretty good right now without those scumbags on the road.....

In this country that could be VERY scary!

LMAO @ comments I wonder if they thought this through?

The other 100 drivers probably hoping for a full strike to clean up.