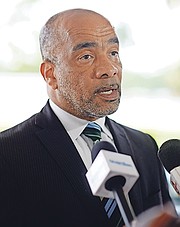 JUSTICE Bernard Turner yesterday expressed concern that the establishment of a sexual offences court could have a “disruptive impact” as legal counsel may already have matters scheduled for other courts.

Justice Turner was also asked his views on the establishment of the sexual offender’s registry. While he declined to comment specifically, he noted communities have an “obligation to protect themselves” without “unnecessarily stigmatising particular persons”.

Speaking to reporters following his remarks at the meeting, Justice Turner also said the work toward implementing a technological case management system for the Supreme Court is “ongoing”, adding a report is expected by October.

When asked if he thinks there should be a specific court to deal with matters of sexual assault, Justice Turner said: “You’re talking about the sexual offences court… We as judges undergo sensitisation training in respect of dealing with these kinds of matters.

“We haven’t gotten there as yet in respect of the reality of our resources and space for establishment of such a court, and…also the reality of the fact that sexual offences matters, those persons if they have counsel, those same counsel are involved in other matters.

“There are criminal defence attorneys, who when they come to court to set a trial date, will indicate that they are booked until 2022…To move all of these sexual offences matters to a particular court, it will have a disruptive impact because of the fact that those same attorneys who may be representing those defendants are also scheduled before other courts,” he continued.

“And one of the balancing acts which we always have to do is that as we have these eight courts in New Providence and one Supreme Court in Grand Bahama hearing criminal matters, that there is a limited amount of attorneys who practice at the defence bar and challenges exist in terms of scheduling dates and times to accommodate their schedules.”

In January, Attorney General Carl Bethel said officials would be pushing for the opening of a sexual offences court during the 2019 legal year to address the “egregious” delay of those matters which have contributed to the long backlog of cases in the court system.

Last month, the government published draft regulations for a sex offender registry on its website.

Regarding his views of such a registry, Justice Turner replied: “Judges don’t comment on the wisdom of legislation, we only rule on the constitutionality of legislation.

“And so to comment on whether that is wise or even whether it is constitutional in advance of a matter being brought before the court is not something that (I will do).”

He continued: “Societies and communities have an obligation to protect themselves and to be aware of potential dangers without unnecessarily stigmatising particular persons for various motives. Complaints could be made for a variety of reasons, which may be motivated by fact or motivated by malice.

“And so it’s important to be able to differentiate between what it is a legitimate concern and what may be an ulterior motive generating a complaint about a particular person. And in all of those matters you have to be discerning and wise… Because that kind of thing could be useful, it could also be destructive if you’re not very discriminating in its application and in its use.”

Justice Turner also spoke to a case management system for the Supreme Court.

“The work of the consultants in respect of providing a roadmap for the implementation of an Information technology case management system for Supreme Court, and the judiciary generally, is ongoing. We expect a report by October, and we have received now several preliminary reports in certainly the aspects of the work which has been completed.”

“We confidently expect that at the end of the exercise that we would have a useful roadmap as to some of the challenges as to our present workflow processes but also a roadmap as to how we might effectively implement a case management system.

“You may or may not appreciate that we have instituted several case management systems in the judiciary in the past. And they have worked to varying degrees of success, as some would say, not to an unacceptable degree.”