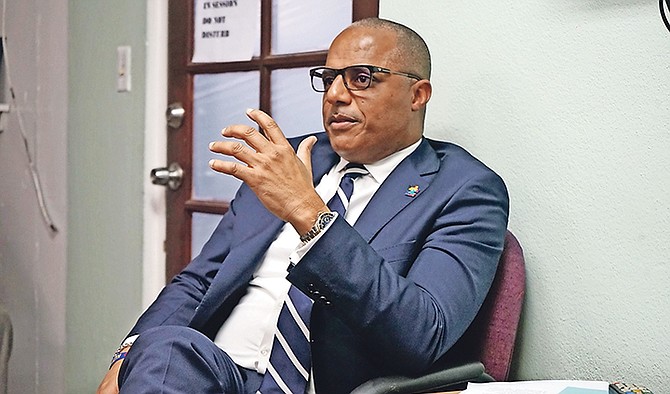 In interviews with The Tribune yesterday, both he and Commissioner of Police Anthony Ferguson stressed the importance of a “systematic” and “sustainable” approach.  Commissioner Ferguson highlighted officers will continue to be “visibly seen” across New Providence.

Their comments came after a spate of gun violence in the capital, including a traumatic incident on Sunday where more than a dozen people were shot while attending a birthday party in Montel Heights.

“These things, these incidences. . . didn’t get here overnight,” Commissioner Ferguson said. “And so you’ll find that you’re dealing with persons who seem to be lawless and then you have to keep working on it to really reduce the level of criminals running up and down the streets and creating fear in people.

“We are prepared to do so by our approach, a systematic approach in getting to the criminal element and removing them out of society and putting them before the courts so they can be properly dealt with.

When asked if this increased visibility will apply to Montel Heights specifically, Commissioner Ferguson replied: “All those areas that we deem, where we see increased criminal activities… you’ll find that we continue to do that. And even where there seems to be none, really as a matter of precaution, I think we’ll continue to move about and be visibly seen in those areas to prevent persons from either wandering around in those other areas. So we want to be able to cover the island effectively by being visible.”

For his part, Mr Dames said the Bahamas is currently “in a better place today than we were a few years ago” in the fight against crime.

While noting incidents such as Sunday’s shootings are appalling, he called for cooler heads to prevail — dismissing calls for the Bahamas to implement a state of emergency as was recently implemented in Jamaica to fight crime, with law enforcement patrolling the streets armed with high-powered weapons.

“Look at where we are over the last two years compared to previous times,” Mr Dames said.

“The police are very much on top of what is happening in this country. You’re not going to stop everything. That’s the reality. I think last year we had the lowest murder rate in (nearly) 10 years. Did we call for state of emergency the previous year? C’mon…we have to first understand the context of the problem…unfortunately many persons are speaking from their gut without first understanding the context by which we face.

“The crime statistics over the last (two) years since we have been in office is a clear reflection of that. And if we weren’t calling for it (previously)…we’re moving in the right direction. We have a plan. And we’re not going to take a knee-jerk reaction to addressing these issues.

“We have to not allow our emotions to drive our conclusions or our decision making…These are not quick fixes. These are manifestations of neglect over the decades. It’s going to require short- medium- and long-term solutions before we can see any cessation of this continued trend.”

The men were contacted a day after Bahamas Christian Council President Bishop Delton Fernander told reporters he thinks residents must give up some “freedoms” so law enforcement can stem crime.

While predicting police would soon implement sweeping searches and road checks, Bishop Fernander asked the public to be receptive to law enforcement being a “bit more aggressive”.

We should feel very relieved and safe after reading this remarkable drivel.........

No Games said he had all of the answers. The lying tongue is changing Only the peoples time voters believed you. The rest of us knew better

I applaud the work this government is doing in controlling crime and making the Bahamas great again, Dr. Nottage was asleep at the wheels poor old soul. Mr. Dames is the most admired minister of national security, in a few years all the menaces in this Nassau society will be eradicated and made inoperable.