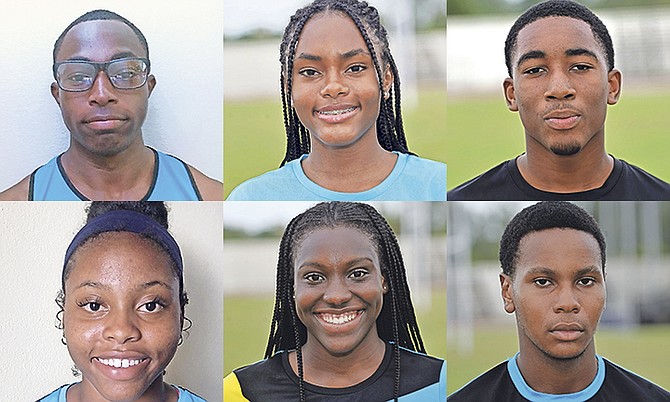 SAMSON Colebrooke, Keyshawn Strachan and Anthaya Charlton helped to lead the Bahamas to a fifth-place finish in the 10th North American, Central American and Caribbean U-18 and U-23 Athletic Championships in Queretaro, Mexico.

The trio collected the three gold medals as the Bahamas finished with eight medals, including four silver and a bronze as the United States of America topped the chart with 27 gold, 23 silver and six bronze for a total of 56.

Mexico followed with 19 gold, 15 silver and 29 bronze for their total of 39. Canada rounded out the top three with six gold, nine silver and 13 bronze for their total of 28. As the meet came to a close yesterday, Colebrooke picked up his second medal when he stormed across the finish line with the gold in the boys’ under-23 200m final in a personal best time of 20.58 seconds. He was trailed by Trinidad & Tobago’s Jerod Elcock in 20.65 for the silver and American Micaiah Harris in 20.74 for the bronze.

The day before, Colebrooke added a second silver in the 100m after the Queen’s College graduate clocked another PB of 10.01 to tie his Purdue team-mate Waseem Williams from Jamaica, who won the gold on a photo finish that saw Barbados’ Mario Burke take the bronze in the same time.

The Bahamas missed out on a spot on the podium in the boys’ under-23 triple jump as Martin Holland had to settle for another fourth-place finish with his best of 16.47m (54-0 1/2) on his second attempt, while Tamar Greene came behind him in fifth place with 16.20m (53-1 3/4) on his second try as well.

In competition on Saturday, Strachan picked up one of two medals for the Bahamas with his gold medal performance in the under-18 boy’s javelin when he tossed the spear 62.70m (205-8).

On the track, Jasmine Knowles gave it her best shot in the girls under-18 800m. But her time of 2:12.70 was good enough for fourth place, just leaving her off the podium.

Ascending to the top of the stand with the gold was Lorena Rangel of Mexico in 2:10.28. The silver went to Emma Pegg of Canada in 2:10.49 and her team-mate Cassandra Williamson got the bronze in 2:11.15.

On Friday’s opening day of competition, Anthaya Charlton soared to the Bahamas’ first gold with her championships record-breaking leap of 5.86 meters or 19-feet, 2 3/4-inches in the under-18 girls’ long jump. Paula-Ann Chambers of Jamaica got the silver with 5.76m (18-10 3/4) and Maria Fernanda Marquez of Mexico won the bronze with 5.69m (18-8).

And in the under-23 boys’ 4 x 100m, the team of Tamar Greene, Samson Colebrooke, Holland Martin, and Shakeem Hall-Smith raced to the silver in 40.33. The USA won the gold in 40.03. Mexico did not finish and Jamaica was disqualified.