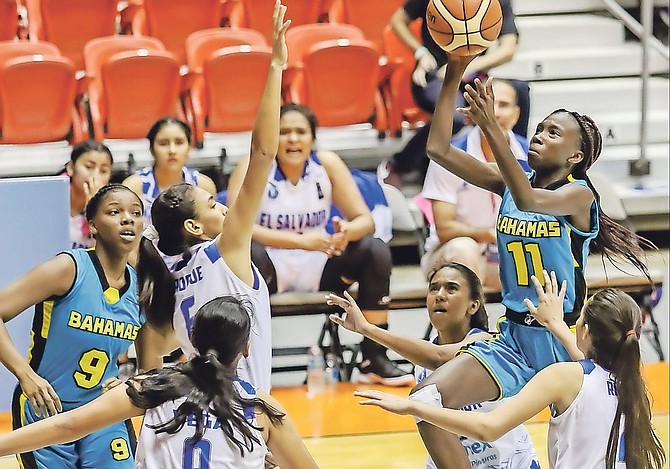 Antonicia Moultrie shoots over El Salvador players during the Centrobasket U17 Championships for Women in San Juan, Puerto Rico.

The Bahamas made an impressive debut with a dominant performance to open tournament play at the Centrobasket Under-17 Championships for Women.

The team scored a 20-point win over El Salvador (79-59) yesterday at the Roberto Clemente Coliseum in San Juan, Puerto Rico.

The Bahamas outrebounded El Salvador 52-40 and had the advantage in second-chance points 16-5. They also held a 44-32 advantage on points in the paint.

“When we first came out they started a little slow because they were nervous but as the game progressed they got better and better. I’m very proud of them because they actually ran the set plays properly. The defence was on par tonight, the bigs played excellent, especially on the boards. As we continue, keep the intensity up and be aggressive I think we will come away with a medal in this tournament,” she said.

“This is a great group of girls, the leadership plays a big part. They showed poise, patience and I loved how they ran through the plays. Now it’s time to refocus and do it all again when we move on to the next game.”

The Bahamas trailed 9-3 early in the first quarter but then went on a 7-0 run. Butler finished a fastbreak layup to give the team a 10-9 lead. El Salvador would eventually take a 19-17 lead at the end of the first. In the second quarter, the Bahamas would outscore El Salvador 23-9 to take control for good.

El Salvador again went ahead by as much as six but the Bahamas was able to chip away at the lead and tied the game at 21 on a Lightbourne jumper. The run continued for the Bahamas and they took a 25-21 lead when Veronaye Charlton made a layup. They went on to close the quarter on a 15-3 run to take command. The Bahamas took a 40-28 lead at the half and that momentum continued into the second half.

They outscored El Salvador 19-9 in the fourth quarter to hold on for the win.

“I think I could have done better but the most important part is that we got the win,” Butler said. “I expect us to win the gold medal. We just have to focus on getting each win one game at a time.”

The Bahamas is placed in Group B with Puerto Rico, Guatemala and El Salvador. Group A includes the Dominican Republic, Costa Rica, Barbados and Mexico. The top three teams in the tournament will qualify for the FIBA Under-18 Americas Championship 2020.

At the 2017 tournament, the Bahamas finished sixth when they suffered a 75-50 loss to Guatemala in their tournament finale. The Bahamas came out of Group B in third place with a 1-2 record, losing their opener 53-39 to Costa Rica and 99-35 to Puerto Rico in their third game.

In between those two losses, the Bahamas got some consolation with a 86-69 win over Suriname. The team played in the reclassification round, pulling off a 79-60 rout over the British Virgin Islands before the loss to Guatemala.