Cline Helicopter Almost Identical To Model That Crashed In Uk 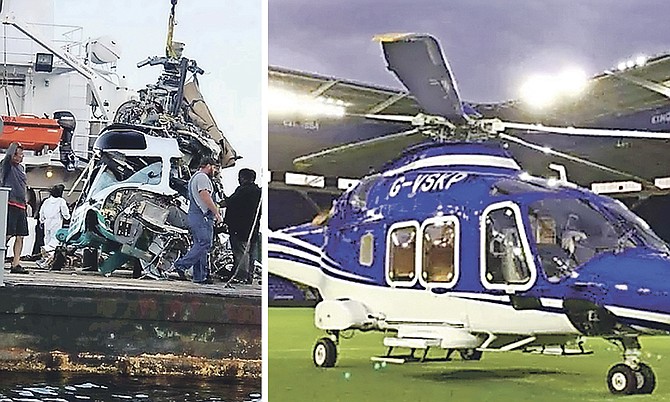 Left: the wreckage of an Augusta SPA helicopter is recovered off the coast of Grand Cay. Right: the helicopter of billionaire Leicester City owner Vichai Srivaddhanaprabha.

THE helicopter that crashed last week in Bahamian waters, killing seven, was nearly identical to a craft that crashed less than a year ago in the United Kingdom and resulted in the deaths of five people, including a pilot and four passengers from the Leicester City Football Club.

On October 27, 2018, an AgustaWestland AW169 chopper crashed shortly after take-off from the King Power Stadium, home of the football club. Among those killed was billionaire club owner Vichai Srivaddhanaprabha. UK investigators blamed the crash on a loss of yaw control owing to a failure of the tail rotor control linkage.

The European Aviation Safety Agency subsequently issued an airworthiness directive demanding checks of tails on all AgustaWestland AW169 helicopters as a precautionary measure. That directive was identical to one the United States’ Federal Aviation Administration issued in 2018 concerning the helicopter model involved in last week’s crash, the AgustaWestland AW139.

After receiving reports of concerns that the thickness of the gearbox housing “does not conform to its type design,” the FAA issued a directive requiring inspections of tail rotor gearboxes. The FAA said the action is “intended to detect and correct an unsafe condition on these products,” specifically a crack in housing that could “result in the failure of the tail gear rotor transmission and loss of helicopter control.”

According to Business Jet traveller, a magazine that publishes editorials on aviation matters, the AW169 was designed to be similar to the AW139, allowing pilots trained on one aircraft to easily transition to the other.

Thursday’s crashed killed American billionaire Chris Cline, a 60-year-old American coal tycoon, his 22-year-old daughter Kameron and five other people, including the pilot. The helicopter, registration number N32CC, departed Big Grand Cay in the Abacos at around 2am on July 4 for Fort Lauderdale to take one of the guests to hospital for an unspecified medical emergency.

It is suspected the chopper crashed minutes after takeoff. However, it was not until 12 hours later that the helicopter was reported missing.

A flight plan for the flight was filed in Palm Beach, The Tribune understands.