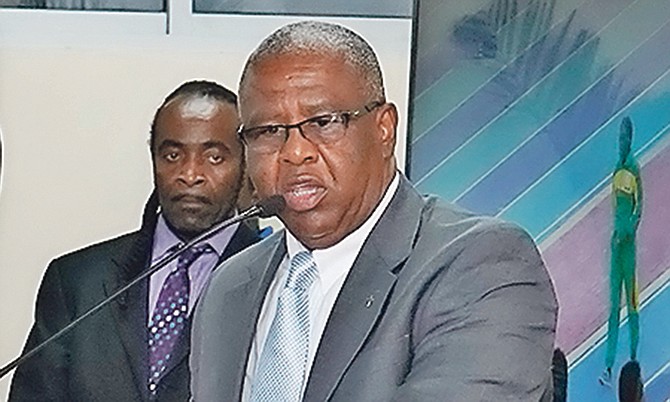 THE government is not to blame for the failure of a teenage water polo team to complete a weekend regional tournament, Algernon Cargill, president of the Bahamas Aquatics Federation, said yesterday.

His comment came after Bahamians reacted with outrage on social media at news that the country’s under-18 boys water polo team, competing at the 28th Central American and Caribbean Amateur Swimming Confederation (CCCAN) in Barbados last week, lacked funding to stay and contest the gold medal match and had to withdraw from the tournament. The withdrawal was reported by the Nassau Guardian. One Facebook user wrote: “This must be fake news because (Governor General) CA Smith got a ridiculous $9,000 a month house rental being paid for with our taxed dollars (sic).”

Mr Cargill told The Tribune the water polo team should not have played the tournament if it couldn’t remain to the end.

“What I’m disappointed about,” he said, “is to read through social media comments to the fact that the water polo team was unable to stay for the gold medal game because of lack of funding or lack of support from either the federation or the government. That comment is false and malicious for many reasons. The water polo division of Bahamas Aquatics made their own travel plans.

“Initially the Bahamas Aquatics Federation had made a decision not to compete in water polo at CCCAN but because the parents wanted their athletes to participate they set about raising funds for water polo and fell short. Although we had earmarked our funding for the Junior Pan American Games, we nonetheless contributed towards CCCAN but at no time did the water polo division of Bahamas Aquatics discuss with us or, I can say, the government that they were going to water polo and would not be able to compete for the gold medal game because they could not afford to stay another day.

“I say that because just as we contributed $4,000, if it cost another $1,000 or so to stay for the gold medal game, we would’ve done that - but to blame the government or to blame Bahamas Aquatics I think is false and malicious and it misrepresents what actually happened. Water polo made their own travel plans, they finalised their own arrangements and obviously there had to be error in their plans or a schedule change but to blame anyone other than themselves for what transpired I think is not representative of what Bahamas Aquatics is all about. So when I return to the Bahamas from Korea I obviously have to meet with all the leaders to first of all speak to them about these comments because I’m very disappointed as the president of Bahamas Aquatics that these comments were made or used to say that the federation or government or any other group has some role to play in the team not being able to play in the gold medal game.”

Nonetheless, The Tribune understands the federation has not received subvention from the government for the past two years.

Mr Cargill said both the government and corporate donors should provide more funding to sport federations. He said despite the wide success of the Bahamas at Carifta games, the federation still has to hustle for funding. He noted the Bahamas has been awarded the chance to host next year’s CCCSAN event and he hopes the government will provide financial aid to help make this happen.

The Minnis administration has been accused before of being stingy when it comes to funding sports in the Bahamas. In 2017, the administration cancelled the popular IAAF World Relays event, causing many to be disappointed.

Concerns about aquatics funding goes beyond this administration, however. Earlier in 2017, Elvis Burrows, an Olympian and a national record holder in swimming events, wrote a letter to former Prime Minister Perry Christie, who was in office at the time, complaining that the federation has “mysteriously lost its funding over the last year.”

“We have tried to contact the Ministry of Sports on numerous occasions only to be continuously ignored,” Mr Burrows said in 2017. “That funding was the very reason that our athletes were able to train at the standard which allowed us to compete on the world stage.”

Nonetheless, Picewell Forbes, shadow minister for that ministry, said in a statement yesterday that the water polo controversy is the “kind of neglect that would never happen under a PLP government. This is disgraceful when you have an FNM government that can literally find millions of dollars for international travel with bloated delegations, on campaigning in the Family Islands and on food for the Office of the Prime Minister. The PLP has repeatedly accused the FNM of abandoning our athletes and not having a plan for local sports development. This debacle in Barbados over this past weekend is proof of this abandonment.”

And these dudes want to join WTO? Can't even keep some boys in the race for gold. Get serious!!!

Cargill cannot blame the PLP UNLESS he would do just that.

These fellows all of them including doc are going from bad to worse. It seems as if the Good Lord has turned his back on them

they tell so many lies and their lies are catching up with them. For instance when one throws rocks in the Church it does not go well with one,