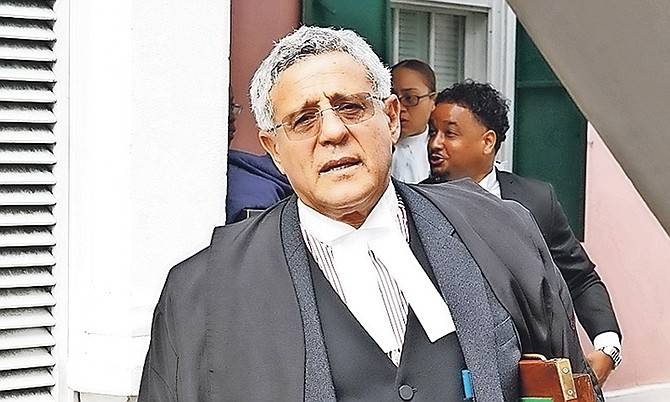 RIGHTS Bahamas yesterday renewed calls for an end to archaic criminal libel laws after social media commentator Gorman Bannister was remanded to prison over the offence.

Bannister was arraigned before Senior Magistrate Derrence Rolle-Davis over allegations he intentionally defamed ex-Cabinet minister Tennyson Wells in a series of voice notes. He was charged with two counts of intentional libel, bail was denied and he was remanded to prison. However, he was bailed a short time later, this newspaper understands.

The human rights group said criminal libel is unconstitutional and has no place in a modern democracy.

RB legal director Fred Smith yesterday said calls for the abolition of the criminal libel laws went back to the early 1980s.

Mr Smith said: "No government, of any party hue, should have criminal libel laws in its arsenal of powers to limit freedom of expression. Rights Bahamas renews its call on the government to enact a human rights act and to legislate against hate speech."

The RB statement continued: "At a time when, around the world, countries are abandoning tyrannical anti-free speech laws, the Bahamas seems increasingly to be keeping company with oppressive regimes and brutal dictatorships.

"In recent times, we have noticed a very disturbing trend by those in politics and law enforcement of wanting to silence critics and those who exercise their freedom of expression by means of arrest and imprisonment."

On Monday, Bannister, 65, denied allegations he distributed voice notes on Facebook and/or WhatsApp on May 2, 2018, which made damaging claims about Mr Wells and his wife, Stephanie. Nonetheless, the Crown claims Bannister made those posts about Mr and Mrs Wells in a bid to defame their character, thereby subjecting them to "general hatred, contempt or ridicule".

The RB statement read: "From time to time, people say will things that others find insulting and offensive, but there is a fair and just remedy through the civil courts for all those who have been wronged. In civilised countries, when a person's reputation is unduly harmed, that individual can sue and if successful, reestablish their good name in the public sphere and win significant damages from the person by whom they feel aggrieved.

"Aside from hate speech, which incites violence or hostility against a particular group in society, no one should be snatched up by the authorities, charged with a criminal offence and imprisoned for speaking their mind," it added.

Bannister also pleaded not guilty to one count of misuse of the telecommunications system. It is alleged that sometime between January and this month, he posted more than 30 images and words on his Facebook pages "Black Belt Leaks", "Black Belt News", and "Gorman Bannister" via electronic devices, a mobile phone and/or personal computer, in a bid to depict Oswald Poitier as a homosexual; to suggest the man is a paedophile; to show a personal image and video of his residence; to make degrading comment about Mr Poitier's parents; and to suggest that Mr Poitier "just kill himself".

For the misuse of the telecommunications system charge, Bannister was granted $1,500 bail with one suretor. The matters were adjourned to September 17 for trial. Bannister is represented by attorney Roberto Reckley, and has a right to apply to the Supreme Court for bail.

So if you publish that someone is a homosexual, how do they prove they are not gay and how will you prove they are. Call witnesses?

Have any of these people so concerned about their good name, actually have a good name?

It seems that at best, these types are liked by their cohorts, but none are of good reputation.

Is it time for me to hang up my hat?

I have personally experienced the perfidy of Gorman Bannister. He used to breakfast regularly at Sailors Choice with a group of his hangers-on. He is an ornery, libelous old cuss with a real history, but I don't think that he should be locked up. Everyone knows that he is slightly batsh*t crazy, but mostly harmless. No one takes his rants seriously, and you do get some good sip sip out of his scribblings.

This man has gone unpunished after slandering, libeling and maligning countless people over the years, couldn't have happened to a nicer guy, should have been either locked up or institutionalized years ago.

I don't agree with Rights Bahamas on this issue.

Everyone doesn't have the funds or will to institute civil action after they have been slandered and demeaned by people hiding behind the veil of anonymity or an online post. If you read the paper last week right here in Nassau a man decides to go and say his ex gf is a prostitute and post her name and number online. Why, cause she didnt want to be with him, he got the criminal charges he deserved - a necessary deterrent in this day and age. Facebook just got hit with a 2mil fine for not dealing with its hate speech posts properly. Some people say its good some say its not. Long story short people to like to get online and talk sht, no facts, no figures, no concern - until its them of course.

Other countries have gotten rid of criminal libel laws, but that doesn't mean we have to. A person slandered should have every legal recourse currently available to them under the law to right the wrong against themselves.

But what if the “slander” you speak of is true, as most often it is.