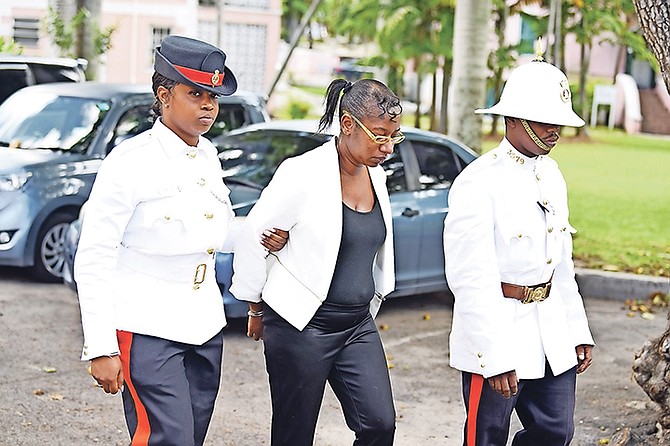 A schizophrenic woman was unanimously convicted yesterday of murdering her one-year-old daughter by dousing her with gasoline and setting her afire.

The woman said she carried out the act because “demons” told her to do it.

Marshall had no visible reaction to the ruling, but sat stone-faced in the prisoner’s dock as the jury’s forewoman declared the verdict. Marshall faces up to 60 years in prison.

Her attorney Bjorn Ferguson told The Tribune he will appeal the conviction, and is prepared to “go all the way” to the London-based Privy Council in pursuit of “justice” for his client.

“We’re disappointed with the verdict,” he said. “Verdicts are supposed to be supported by evidence. It’s their verdict, but we think they fell into error. And as a result, we will have to appeal the decision. And so, we’ll see what the Court of Appeal has to say about it.

“We intend to go all the way,” he added. “This is a case that I think highlights the fact that mental issues in our country are still not being taken seriously. A (negative) stigma is attached, and I think that is reflected in the jury’s verdict today. So we’re prepared to seek justice.”

Yesterday’s verdict came a little over an hour after the jury was given four options in deciding the elder Marshall’s fate: murder; manslaughter; manslaughter based on diminished responsibility; and not guilty by reason of insanity.

The latter two options were borne out of the evidence led at trial, particularly during the defence’s case and Mr Ferguson’s submissions, which was that Marshall was “not in her right frame of mind” when the offence took place.

Prosecutors had asserted that the 41-year-old doused her child with gasoline and set her on fire at their home after “hearing voices”. Philicia suffered second and third degree burns on 43 percent of her body as a result.

The child died in February 2018 at Princess Margaret Hospital (PMH). She didn’t die from the burn injuries, but from an “overwhelming” bacterial infection—klebsiella pneumoniae sepsis—that when tested, was extremely resistant to multiple antibiotics.

That infection, according to Forensic Pathologist Dr Kiko Bridgewater, likely set in during her hospitalisation at PMH. The lack of an epidermis, or the protective outer layer of skin, made it easier for the toddler to get infected in such an open environment.

As to what actually took place on the night in question, Sergeant Tamika Gibson, who was formerly attached to the Carmichael Road Police Station, said Marshall’s husband Isaac Marshall told her that he fell asleep with Philicia and his two sons by his side, only to wake up the next morning to discover that his wife had spirited the child away to another room and set her on fire at the behest of “demons”.

Sgt Gibson said when she arrived at the residence and gained entry that morning, she observed the entire family in the front room. Mr Marshall and the two boys were on the couch. Marshall was seated on the floor, attempting to put a pink sweater on Philicia, who was lying on a tan blanket next to her. According to Sgt Gibson, Marshall was getting the toddler dressed to go to the hospital.

Sgt Gibson said Mr Marshall told her—in his wife’s presence—that at around 10.30pm on December 27, 2017, he fell asleep on the floor with his two sons, ages seven and three, and Philicia next to him. He said he awoke around 2.50 the following morning, and when he did, realised his daughter was no longer next to him.

After cautioning and arresting Marshall, Sgt Gibson said she made checks of a northern bedroom where a red, car-shaped children’s bed was situated. And on the bed, was a burnt pillow and a burnt, red blanket.

During his submissions, Mr Ferguson called on the jury to find his client not guilty by reason of insanity. He referred to the evidence of Dr Kirk Christie, a psychiatrist, who previously testified that Marshall had told him and others that the reason she set her daughter afire was because a demon told her to ignite both herself and the child.

In July of last year, and during a hearing to determine whether Marshall was fit to plea to the charge of murder, Dr Christie said Marshall told him that she was coaxed to set her daughter afire by “demonic voices” that had been “commanding” her to kill herself and do other “bad things”.

Dr Christie said Marshall also told him about being tormented on a daily basis by those demons for the past three years at the time, which she claimed included her being instructed to overdose on tablets and harm herself.

According to Dr Christie, Marshall described those demons as being as tall as the ceiling, with no arms or legs, and with eye sockets but no eyeballs. She also mentioned seeing a dark shadow hovering around her which she said was another kind of demon that tormented her daily.

Dr Christie also said Marshall indicated two previous suicide attempts by driving her car off the road into lamp poles, and that she felt like committing suicide would free her from hearing the demonic voices and seeing the demons.

Nonetheless, Dr Christie said Marshall had an “unshakeable belief” that one of her neighbours had “fixed” her by using witchcraft to cause her to be possessed or tormented by demonic forces.

However, Dr Christie said Marshall has since reported that while she still hears the demonic voices in her head, they now tell her to do “good things” as opposed to commanding her to commit suicide or other negative acts.

Dr Christie added that during the time he and other officials at the Sandilands Rehabilitation Centre (SRC) were working with Marshall at the Fox Hill facility after the incident, she was hopeful her child would be okay. However, he said when Marshall got the news of her daughter’s death, she was thrown into an “emotional catharsis” and began crying as a result.

This, Mr Ferguson asserted during trial that Marshall is “ill” and not “evil”, adding no healthy woman would hurt her own child.

However, lead Crown attorney Cephia Pinder-Moss, who was assisted by Tommel Roker, asserted that Marshall had the presence of mind to commit murder and was “methodical” with her actions—noting Marshall waited until her family was asleep to grab the child, took her to a bedroom and locked the door, and doused the child with gasoline.

Marshall returns to court on September 19, at which time it is expected that both a psychiatrist and probation report will be prepared. She is remanded to the Bahamas Department of Correctional Services (BDCS) until that time.