‘All He Did Was Try To Run Away’ 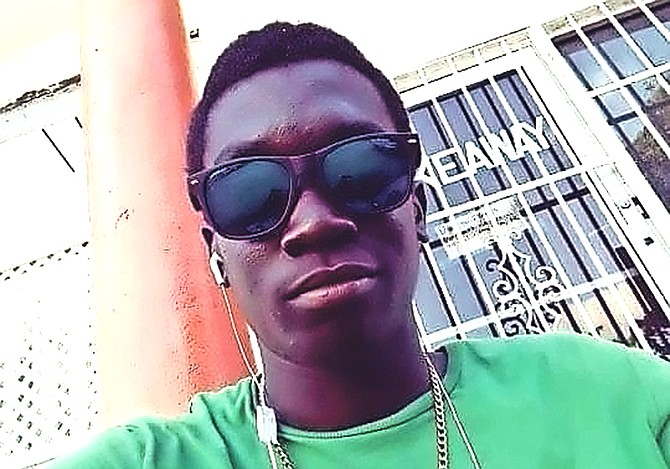 FAMILY members and loved ones of the young man shot and killed by police on John Street Wednesday afternoon are calling for justice.

The Tribune understands the deceased is 21-year-old Adrian Emillien who, according to our records, is the fifth person to die in a police shooting this year.

In an interview with The Tribune, a woman who identified herself as the victim’s step-aunt, but who did not want to be named, said her nephew was not a saint but said he was a humble and respectful person.

She said: “I wouldn’t say ‘my one good nephew’…no, yeah he was in and out of prison. It wasn’t for nothing serious but that never stop who he was as a person. He was a respectful person and a mannerly person. He was quiet because if you didn’t know him, you wouldn’t know he could talk.”

However, police have said officers were conducting an operation on John Street in the Bain Town community around 1pm on Wednesday when they encountered a man “engaging in the sale of illegal drugs” and armed with a firearm.

The man “engaged the officers” which resulted in him being shot, police said. The victim was taken to hospital, where he was later pronounced dead.

Officers recovered an illegal firearm and a quantity of dangerous drugs at the scene, police said.

“Broad daylight…children go to that shop, that shop is through the corner, not on the main road but it (isn’t) safe no more. My kids restricted and can’t go up there, can’t get cup or ice cream. We don’t know if they (were) coming back; people in fear. This community, everyone is always (outside) and last night the corner was dry.”

“He is still somebody. It’s inhumane to say ‘oh it’s just one less criminal (on the streets).’

A woman who identified herself as the victim’s girlfriend, who did not want to be named, said she has mixed feelings following the incident.

She said: “Right now I don’t know how to feel… one minute I’m trying to hold strong, the next minute (I’m) breaking down. I wouldn’t say he was a good boy, but he was trying to make it on the road as a Haitian citizen.

“He had his flaws, no one is perfect. . . my (daughter) is old enough to understand and she knows what’s going on so she can’t take it.”

She added: “I don’t know (how) to feel safe because the ones who supposed to be protecting us, they are working against us and killing us down like dogs in the road. (I want) justice, justice needs to come out of this.

“It’s wrong, he had no guns or drugs on him. Only shots fired that day was the shots the (police) let off,” she alleged. “Whatever they trying to plant or put together it (isn’t) working. You shot a man running (away) that means he afraid of y’all.

“He was running away from y’all and y’all shot him down like a dog and drag him out to the road like a dog. (Police) told him, ‘bey get up, bey ain’t no-one helping (expletive) you…get up bey.’ They treat him like a dog (sic).”

When asked about police-involved shootings yesterday, Commissioner of Police Anthony Ferguson told reporters in most cases, the suspect is usually in “possession of a firearm and confronted police”.

Commissioner Ferguson said: “If you are out there on the front line and you are in possession of a firearm and you confront the police it is very likely that you can be injured, very likely.”

“We train daily because, let me put it this way…I think the Bahamian people... the fear, you know what it is the fear of you walking and somebody shooting you. You don’t want that fear so the police ought to be that buffer to make sure that if any shooting to do, let them shoot at the police because the police is trained to take necessary action to prevent you from being shot.”

The matter will now head to Coroner’s Court for an inquiry.

Lol! In and out of prison? Says enough for me. One stint is enough to put fairly normal people on the right path. More than that and you need to be removed from society. Sure there are always circumstances be we have many, many more young people who will make a go at life the right way. It's not like we are short of workers and need all the young people we can get.

We sure like to emulate our "great" neighbour to our north-west. Does not bode well.

As they say in the street vernacular: He had it coming, it was only a matter of time. Thankfully he had less time to harm the innocent among us.

IF HE WAS SO "INNOCENT" WHY RUN FROM THE POLICE. INNOCENT PEOPLE DON'T RUN FROM LAW ENFORCEMENT, CAUSE IF YOU ARE INNOCENT THEN THEY WOULD HAVE NO NEED TO DETAIN YOU.

EVEN IF IT'S A CASE OF MISTAKEN IDENTITY, IF YOU ARE INNOCENT LET THE SITUATION RUN IT'S COURSE AND YOU WILL BE REVEALED TO BE INNOCENT.

SMH...RUN AND ONE ASSUMES YOU ARE GUILTY.