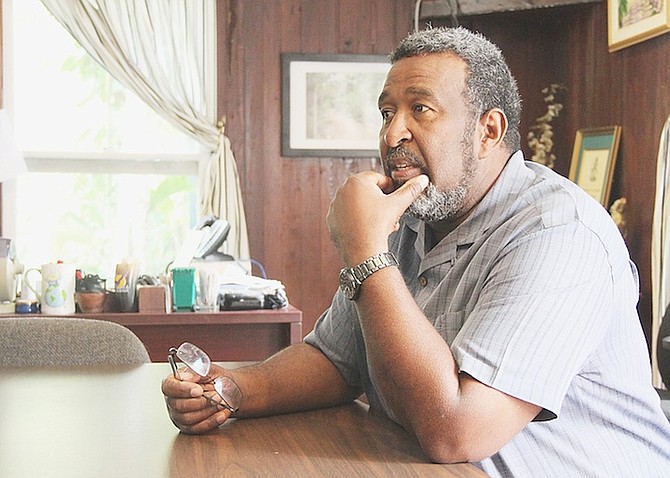 THE death of an American woman from a shark attack in Bahamian waters has presented significant challenges to conservation efforts.

Bahamas National Trust executive director Eric Carey pointed to “back channel” campaigns to introduce legal provisions that would justify killing a shark under certain circumstances following the death of 21-year-old Jordan Lindsey. His comments come as researchers at the Cape Eleuthera Institute (CEI) celebrate hard-won scientific breakthroughs that have crystallised the country’s global reputations as a leading site for shark conservation and protection.

The college student died from a shark attack off Rose Island on June 26 as researchers descended on a mission to successfully satellite tag a deep-sea bluntnose sixgill shark some 500m beneath the surface in Exuma Sound.

“Recently there was a fatal attack,” Mr Carey said, “and every time one of these incidents happen we realise how much education we still have to do. I am fighting a back channel effort to do any number of things, to take sharks off the protected list, to let Bahamians kill sharks, to allow the Chinese to come in and cull so the numbers can be reduced to manageable levels.

“Talking to the fishermen, they understand, they are used to dealing with sharks but if there is more information that is out there that is fed by the really unfortunate demise of Jordan - we have to counter that with some really good science.

“We have to have discussions about the shark interactions, shark feeding. Right now they drive the debate.”

The groundbreaking tagging, aided by the use of OceanX submersibles, will allow scientists to study the deep-sea predator in its natural habitat without posing a significant disruption to its life. Studies have shown the stress of capturing and pulling these sharks to the surface alters their behavioral patterns. The deep-sea tag represents cutting edge innovation in biologging technology by Microwave Telemetry, and also protocols for telemetry tagging as no animal has ever been tagged at such depths in its natural habitat.

“This was just in our backyard,” said CEI’s lead scientist for deep sea and pelagic research, Brendan Talwar. “This idea of the Bahamas being a shark sanctuary is one that carries a lot of weight, not only for species that are highly migratory but also for animals like the bluntnose sixgill shark and a lot of other deep sea species that don’t travel long distances and spend most of their lives in the Bahamas and we know almost nothing about them.”

Mr Talwar said: “Hopefully this marks the beginning of a larger project where we actually know we can tag these animals at depth and there is the potential to do more work in their environment, and learn more about how they live on their terms.”

The second phase of the mission saw a team embark on a research and media mission following the migratory patterns of critically endangered oceanic white tip shark mothers from their sanctuary in the Bahamas to the unprotected and overfished waters of Haiti.

Researchers have tagged over 100 oceanic whitetip sharks in Cat Island, according to Lucy Howey, a wildlife tracking technology developer and lead researcher at CEI. Near the Windward Passage, researchers caught and tagged seven juvenile sharks in hopes of harvesting data that will confirm the area as a critical habitat for the species.

The breakthrough was made after scientists were alerted to pictures taken by marine conservation nonprofit Haiti Ocean Project (HOP) of dead juvenile white tip sharks caught by local fishermen. HOP founder Jamie Aquino underscored an immense surge of hope and relief to finally see sharks caught and released alive during the expedition, and the mission’s impact on future international collaborations.

The data is critical to support conservation campaigns used to convince governments to designate protected areas and legislate and strengthen protections, according to Dr Mark Bond, who works on international shark policy and negotiations at the Convention for International Trade of Endangered Species.

The uptick in fear-based campaigns seeking to reduce the number of sharks in Bahamian waters was also highlighted by The Nature Conservancy’s Shenique Smith.

“What’s been rising to the top is a lot of fear about sharks,” said Mrs Smith, director of the Nature Conservancy’s Northern Caribbean Programme.

“There has been a lot of misinformation and you also see a lot of people questioning if we should continue with the shark ban and the shark sanctuary in the Bahamas. But we’ve been trying to encourage people not to let one incident dissuade us or distract us.

“The research is very promising,” Mrs Smith continued. “It speaks to the need for us to focus on our national conservation efforts but also to think about how can we use the bilateral, multi-country approach.

“We don’t want to jeopardise what we’re doing here because of what’s happening in other places so we do need to have the dialogue with other countries about what’s the impact on these shared populations that move between multiple countries.

“It’s a moment of pride,” Mrs Smith said, “that what has been done in the Bahamas, banning long line, the shark sanctuary - these are things that are being shown to the world as a model for other people to follow in conservation.”

She added: “We have a long legacy of being a leader in marine conservation in the region and I think this just solidifies it even more.”

The deep sea expedition was conducted from June 25 to 29, and the Haiti mission followed from June 30 to July 17.

The research teams briefed local media at an event staged at the school last week Thursday.

Both legs of the mission were supported by partnerships with OceanX, The Moore Bahamas Foundation, Wildlife Conservation Society and Bloomberg Philanthropies’ Vibrant Oceans Initiative with leading researchers attached to CEI, the New England Aquarium, Florida International University, and the University of North Florida.

The intersection of technology and scientific research, and its application for real world solutions is the masthead of the Cape Eleuthera Island School, according to its CEO Dr Edd Brooks. Dr Brooks founded the school’s acclaimed Shark Research and Conservation Programme, which played a critical role in the country’s decision to ban long-lining and establish a sanctuary.

“Sharks are so important to us in our country,” Mr Carey continued, “and obviously from the ecological perspective but also now documented as a result of work [Dr Brooks] led to document the economic value.”

Sharks and rays, according to research, generate $113.8m in revenue annually. CEI was found in 2006 to manage the school’s research programme in the areas of tropical ecology, marine biology, and sustainability.

What are they doing tagging sharks and also talking conservation.

Jackass medaling in the sharks territory.

They are not guinea pigs for you to eff with. If u really want to help them, leave them alone, and stay away from them, don’t interact with them , don’t feed them, and don’t ruin their habitat

So much damage is done in the “pursuit of science”, when they know better, and use the fuse of science as a justification to cary out their narcissistic driven mis adventure!

Mr. Darville is finally coming to his sense. . .too many sharks, turtles and human in the same environment is an invitation to massive attacks. . .too many sharks are about!! Some highly infested places on this planet don't have the amount of attacks we are having right now!! They have well regulated culling programs when sharks get out of hand!! Why is there so many stupidity in conservation efforts in the Bahamas?? MR. DARVILLE "SEES THE WRITING ON THE WALL". . .SHARK POPULATIONS ARE WAY TOO HIGH. . .THEY ARE ROAMING ALL OVER THE PLACE. . .IN CREEKS, AROUND BEACHES, DOCKS ETC. With no threats to them, sharks will dominate. . .

Since you are reading this article it makes me think that you might be interested in learning about our organization SharkBytes and our free research-based shark app.

SharkBytes is a non-profit organization whose mission is to improve shark and human relations by educating the public regarding shark related incidents and to increase awareness of the risks of depopulation of sharks. One of the ways we accomplish this is with our free app.

Our app allows users to look up the shark history or activity at every beach or water destination in the world. The history allows users to see information on any shark incident that has ever occurred. Our database includes world wide data that goes back over 100 years which amounts to roughly 6000 incidents. We also have a user based interactive map where users can see and report all current and past shark sightings in a given area.

You may think that all this information would scare people from entering the water; but, we have found that they actually feel safer after seeing the real data. The main reason for this change is that the data usually reveals how few incidents actually occur at their beach. Also, being able to view the details of a shark incident tends to provide a peace of mind to beachgoers because with most shark encounters injuries tend to be minor.

Another feature of our app is the alerts. Anyone with a smartphone will be able to receive free alerts through a push notification whenever a new shark incident takes place so users have information on when, where, any injuries and status of beach closures. With the use of this feature, our users will be up to date with the most current shark activity without any hype. Because it is our mission to improve shark-human relations, we try not to demonize sharks by omitting the phrase “shark attack” in any of our reports. While many media organizations tend to sensationalize these events, we take pride in the fact that we report only the facts surrounding shark encounters.

Shark research, as all Marine Biology, is important. Sharks are important in the balance of nature and the food chain. Thank goodness there continues to be scientific research and preservation of marine species. As it is, species are disappearing.