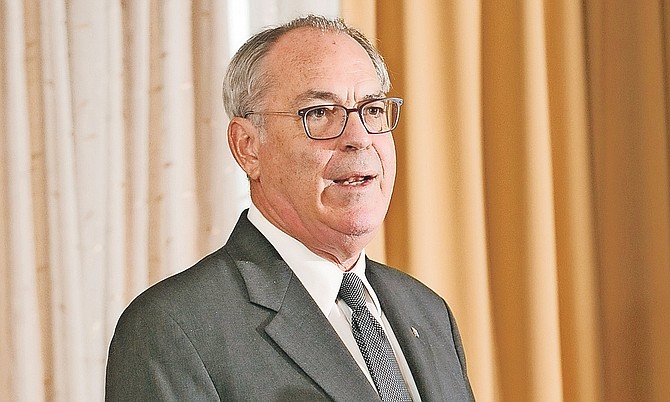 THE resignation of the former Minister of Immigration, Financial Services, Trade and Industry, Brent Symonette, has been far from the proverbial ride off into the sunset. Instead it has been mired in the usual controversy that surrounds the questionable decision making and sloppiness under the past two years of the Minnis administration.

This is not to say previous governments were choir boys, just an honest assessment of what we’ve witnessed under this Minnis-led government. Although transparency has been a buzzword since Dr Minnis’ campaign trail, it could not be more absent in government.

We only know what they want us to. And for the political sycophants who salivate at the opportunity to bash the prime minister, don’t be fooled. This doesn’t only apply to the Minnis administration. Rather, it has been the state of play among both major political parties.

Minnis and company may just be worse at keeping their dirty laundry out of the media. Furthermore, one would think with all the noise that surrounds Brent Symonette, Minnis would have paid special attention to ensure all bases were covered.

On the contrary, the former minister’s exit has been somewhat of a tell-all interview tour dissecting the government’s decision to rent facilities in the Town Centre Mall – owned by Symonette and his brother.

We should recall that when the government initially considered renting space in the Town Centre Mall the public were up in arms. To quell their dissatisfaction, the prime minister in October 2018 indicated Symonette would not be present during Cabinet discussions related to the post office and affirmed he would declare his interest during the debate – a time earmarked by the prime minister for when all of the details surrounding this deal would be made known to the public. Moreover, the prime minister went so far as to calling the government’s handling of this matter “complete transparency”.

Nearly a year later, we learned this was a lie.

When Brent Symonette appeared on Shenique Miller’s show, “The Conversation”, and unpacked some of the details leading up to the government’s resolution to rent facilities in the Town Centre Mall, many people quickly began connecting the dots.

Detailing a discussion between himself and the prime minister, Symonette said: “I figured there’s no way they are going to rent from my brother and myself, so I left it alone. The phone rang one morning in whenever I was in Mexico. It was early in the morning; PM and I get up early and PM said ‘We are going to go ahead with the lease’.”

He continued: “I said, ‘PM, I can deliver it by Christmas if it’s no Rolls Royce and we have to reduce the size of the building. It can’t be 70, 80,000 square feet. It has to be a Volkswagen not a Rolls Royce.’ We had that discussion.

“I said, ‘You have to deal with the whole question of conflict of interest.’ He said, ‘We will do a resolution in the House of Assembly.’ He said, ‘What will the rent be?’, I said, ‘$12 per square foot’ and I came back; my partners dealt with the Ministry of Works, everything else.

Since the time of this revelation, local journalists have determined that the only known time that Symonette was in Mexico was on October 4 to attend the Society of Trust and Estate Practioners Conference – two weeks before the resolution was tabled in Parliament.

This revelation has been damning to the Minnis administration, as we’re left to question how on earth the prime minister figured this would go over with the Bahamian people.

Understandably, this has caused much anger as it confirms there was a direct conflict of interest moving the post office to Town Centre Mall. A resolution in Parliament would have hardly been sufficient to remove the bad optics. Worse, the government will no doubt pay a price, as political capital has been squandered amid this latest controversy.

It is confusing that a veteran politician like Symonette would reveal such shocking details that would give such a black eye to the government. One may wonder if this is sabotage on his part. After all, he admittedly supported Loretta Butler-Turner, former deputy leader of the FNM, and for a short time, the Opposition Leader in the House of Assembly, after leading a coup to remove Minnis as the party leader.

Certainly, Minnis may have won the battle and retained party leadership to eventually become prime minister, but we cannot blame those who may believe those who lack confidence in Minnis are poised to win the war.

There is no reasonable explanation for Symonette to be so forthcoming with information that can potentially be so damaging to the prime minister.

During the debate in Parliament over the resolution, Prime Minister Minnis attacked the PLP’s plans for the post office – calling them less cost-effective, non-transparent and filled with dubious questions.

Now, the irony is that despite the savings achieved by the government renting the Town Centre Mall, the decision faces similar questions, lacks transparency and may prove to be more costly politically.

These days, the prime minister has been silent on the matter, and the Speaker of the House has muzzled debate on the deal in Parliament. However, the conversation outside Parliament is as vibrant as ever with people drawing their own conclusions. Just as you would assume – no one’s estimations are favourable to the Minnis administration, which refuses to take control of the narrative, leaving itself to look even more guilty.

Continuing to ignore this gigantic elephant in the room won’t make this go away. Perhaps the conversation may die down over the next few months. However, with 2022 and silly season right around the corner, this is no doubt going to be ammunition for a kill shot.

Indeed, political observers are not reaching if they are questioning if this was an act of sabotage. Although Symonette has on more than one occasion spoken highly of his professional relationship with the prime minister, politics is a game of chess. And few have been more astute than Brent Symonette.

It is no secret Minnis wasn’t the candidate the FNM power brokers picked. Whether he was strategic enough to reclaim party leadership going into the election, or whether the perfect storm of Butler-Turner’s coup falling apart, along with the 2017 election being a referendum on the Christie administration can be debated until we’re all blue in the face.

However, it does not hurt to consider how this will play into the FNM’s leadership picture in 2022. With the Progressive Liberal Party guaranteed to be more formidable with Christie off the scene, the FNM is wise to consider if Minnis at the helm will be the right choice for the party next election.

Surely, this may be a conspiracy theory. But alternatively, we may be naïve to believe that Symonette, a skilled politician spanning three decades, will go out this sloppy.

This is one to keep your eyes on.

What was Brent Symonette thinking? ‘I gat the money so I’m getting the heck out of dodge and while I’m at it since the white knight representation is no longer in a key place, let me give the leader a black eye on my way out’

Mr Symonette threw doc under the bus. Note the PLP was going to pay more per square feet than the FNM. Naturally all of them had seen all of the quotes and he Symonette knew how much to bid. They know the peoples time voters fool for sure.

I am always confident that there is a just God. and his justice will prevail and there is nothing doc or any one else can do to prevent it.

Strachan watch out ..The Tribune I believe is different. They allow me to post and I agree with very little of their pages so you may be all right.

At least under the FNM we get something ie A post office .When the PLP does business w their friends and cronies we get nothing ,btw 2012 and 2017 .Unless you consider 500 million walking out the front door of BOB and unleashing the robber baron numbers man on the poor people for a pittance in tax an infrastructure project

Brent is a billionaire with no need for "thinking". There is NOTHING to suggest Brent Symonette is remotely astute! Brent is well proven to be a self-dealing political hack that ALWAYS gives himself "sweet deals" at the expense of the peoples Treasury!

Minnis has proven no better than Ingraham and Christie with his slick promise of "The Peoples Time" and he will suffer the same one-term fate of dumb Ingraham, and dumber Christie, come 2022, and the PLP is not an option.

We the people are sick and tired of the PLP and FNM!

What do you suggest---Bring back the UBP??

Why not bring back the UBP? After all, Minnis did posthumously anoint Pop Symonette a National Hero. LMAO

@Malcolm Strachan, I enjoyed reading your insight again this week, but I do believe that you have gotten it wrong. I don't believe that Brent intended to sabotage the Prime Minister's leadership by discussing the initial conversation on the talk show.

Not sure why people are up in arms over this, an initial conversation had to be started in order to get the negotiations going about the rental of the Post Office. Who else is the Prime Minister going to start the conversation with? He wanted to get a better deal per square footage than was previously negotiated with the PLP. I believe that once that initial conversation was had, Brent indeed stayed out of it, leaving it for debate among his fellow parliamentarians.

I certainly would have preferred to see the post office moved into the old Phil's building because the government owned it. But, after careful thought, I didn't think that the government was capable of maintaining that building in the long run. It would prove to be another dilapidated government building after 5-10 years. Perhaps it was best to rent, and certainly no one could beat $12 per square foot for a rental. Besides, we were losing all around.

The post office staff were being paid for full day shifts when they really were only working a quarter of a day, and also a resolution was needed quickly because they were exposed to all kinds of hazards in that old dilapidated building. Bahamians had not received mail for months, which was a disgrace. These were the number of issues that Minnis was faced with. So as far as I am concerned, the people can make as much noise as they want, the decision to move forward with the post office was fair.

Let see what the people will say when the staff members are back to work full time and they are collecting their mails in a timely manner in a conveniently located spot.

Comrade Brent has previous knack getting fired (jump off sinking political ship) only get exonerated look likes he voluntarily had long enunciated his retirements, yes, no .... a man's worth likes $650 million, not exactly known his leisure timeouts, nor does man's play game golf, go yachting, play tennis or for his world hopping tourist excursions, so not likes he be pressed downtime spend his children's, and why hell does media keep referring his offspring's as 'children's when they done arrived maturity adulthood ages, long time years back before ReadyMix, yes, true .... children's, now that is hilarious .... Can't just be making this up it looking more likes well-orchestrated political jump move to bounce-back but only after doomed 2022 general election done passed. More likes this is man's experienced, very experienced lots political bounce-back matters and things ....