Family Of Mother Who Set Daughter Ablaze – My Sister Needs Help, Not Just To Be Punished 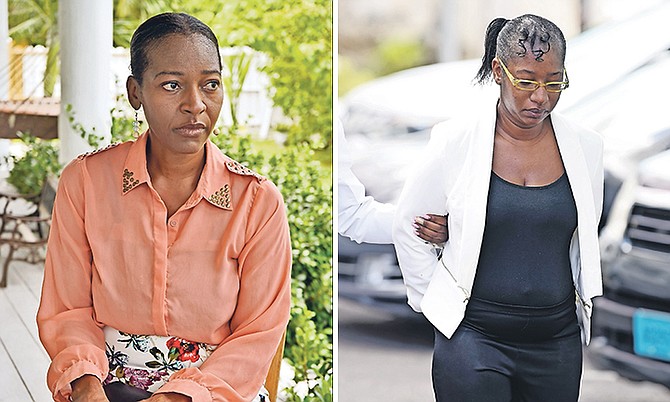 FROM LEFT: Denise Carey and her sister, Philipa Marshall, outside the Supreme Court.

PHILIPA Marshall, the schizophrenic woman who was convicted of murdering her one-year-old daughter by setting her on fire, needs help, not retribution, says her elder sister Denise Carey.

In an interview with The Tribune yesterday, Mrs Carey, 46, called for a national conversation on mental health issues as well as the revision of laws to adequately identify those suffering psychological disorders and administer “appropriate corrective action”.

Mrs Carey said her sister has a long history of mental health issues - including two suicide attempts in as many years. These were problems Marshall, a married mother-of-two sons, was receiving assistance with until she had to stop taking medication when she fell pregnant with her baby girl.

Ms Carey was adamant Marshall’s actions that fateful December 2017 night were directly due to her mental illness. She noted her sister adored her daughter and would have never harmed her “had she been in her right mind”.

Describing Marshall as a dedicated mother, wife, aunt and sister, Mrs Carey also noted Marshall was a law-abiding citizen who never displayed a propensity towards violence.

Mrs Carey said the first time she was made aware that Marshall was experiencing “challenges” was in late 2015, when Marshall overdosed on pain medication.

It was also revealed that this was Marshall’s second suicide attempt.

“I was shocked,” said Mrs Carey, adding after the overdose, Marshall began seeing a psychologist and was placed on medication. Mrs Carey also religiously began attending group therapy sessions with her sister.

Unfortunately, her sister began to regress and reported experiencing “challenges”.

“We just continued to pray things would turn around,” Mrs Carey continued, noting her sister believed her issues to be spiritual and reached out to many members of the clergy.

“She actively sought help because she was truly tormented,” Mrs Carey said.

“But if you would have met her, you would not have known,” she continued, describing Marshall as warm-hearted and soft-spoken.

Seven months later, Marshall doused her daughter in gasoline and set her afire.

The one-year-old was hospitalised and died of an infection three months alter.

Marshall later told psychiatrist Dr Kirk Christie that she was coaxed to harm her daughter by “demonic voices” which had been “commanding” her to kill herself and do other “bad things”.

While on bail, Mrs Carey said her sister was under surveillance and on a regimen of both oral medication and biweekly injections.

“She has very strong family support, now that we’ve put a name and a diagnosis on what she’s suffering the onus is on us as a family to make sure that she’s compliant with her medication.”

On July 16, Marshall was unanimously convicted of murdering her daughter after the jury considered the case for less than one hour.

She returns to court on September 19, at which time it is expected that both a psychiatrist and probation report will be prepared. She is remanded to the Bahamas Department of Correctional Services (BDCS) until that time.

“I’d like to see the laws be revised in regards to mental illness,” Mrs Carey said. “Because I believe that once we have our laws properly structured it would allow latitude to the justice system to identify persons correctly and to appropriate the corrective action that needs to happen with these individuals.

“And definitely I believe that this requires a conversation, a national conversation. Because I think that many people… just do not have an appreciation for mental illness.”

She noted the stereotypical image of a mentally ill person is often a “crazy person” or a vagabond. However, Mrs Carey emphasised that any ordinary member of society can be a victim of a mental disorder.

“I believe that if we start to have conversations, that people would be more sensitive to the issue and they would be able to identify signs, early warning signs that they may see in a coworker, in a student.

“When we start to have these kinds of conversations, and we start to raise awareness, I believe that Philicia’s story, Philipa’s story, does not have to repeat itself.

“And I believe that revisions to our laws would allow these persons to be properly dealt with. Because locking them away in Fox Hill is not the answer. That is not going to solve our problem.”

This is a sad situation. The reality is the mother was getting help and decided not to continue to accept it. She voluntarily stopped her medications and the group counseling that was helping her. and as a result a child is dead. Whose fault is that and what should the sister expect to be done?

Sad all around. A woman is locked away, who clearly needs help and an innocent precious child is gone.

I do agree with the sister. . .could we have done this different? I see many persons in the street who are not taking treatments and clearly show signs of acute episodes and in my mind, a short frame from doing harm to others!! Should we require the same protocol for violent offences as we do to a sane citizen? I beg not. . .it depends on us to do something to help them!!

In 1989 while living in the eastern Caribbean, a man with the same condition as the sister attacked and killed two old persons on Cokie Beach, St. Thomas, USVI and eat parts of the bodies!! That man's case was a media sensation in that region. . .the man was sentenced to an asylum. . .no jail time was given!! I am disjointed with this case. . .I don't know if jail time was the best thing to do. . .even though legally, it was the "right" thing to do!!

It seem that we throw away "perfectly good" peoples dem! For example, I frequently see a young woman in her late 20s or so walking around the Arawak area with a stomach growth that is almost three times her size. . .obviously she is in tremendous distress!! Persons in NOGs and GOs who pass her daily and do nothing. Obviously the help she needs cannot be done by giving her "a slow five". . . she needs medical help like yesterday!! But no, "she crazy" is the normal response I hear!!! I guess the murmur means "why relive her of that growth when she is crazy. . .what kind of life will she have afterwards"? I pray that someone with the ability to help will one day see her and offer to help. . .or the Department of Social Services may see and help her!!

Dr. Christie will need to advise the judge on the fate of this ill woman after evaluation. Even though schizoprenia is a disease, each case ( individual) is different.